Ex-Trump Secretary of Defense: No, I Didn't Authorize Milley to Reach Out to the Chinese 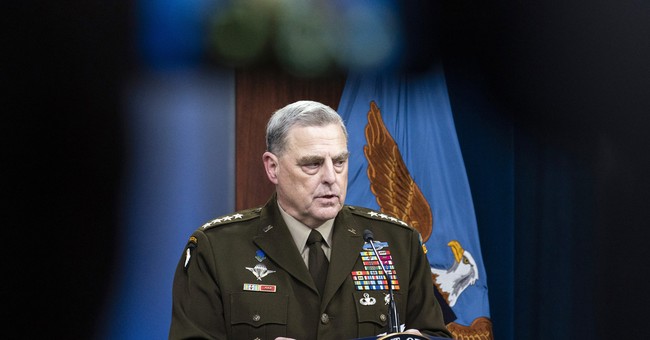 The Biden administration promised that the adults were back. The norms would return. It wouldn’t be a circus. All were lies. It’s more chaotic than ever with the thick layer of irony being that this White House has committed the very acts of incompetence they allegedly lobbed against the Trump administration. It’s worse. Job creation is in the toilet. Inflation is rising. Our allies are infuriated with us. And we had one of the most shameful and embarrassing exits from Afghanistan. Biden’s people knew the country was in trouble all summer and didn’t pay attention. Now, we have quasi-military coups. Granted, this is a saga that leeched into both administrations but only with regards to the central figures. We have some of these folks continuing under Biden, but the fact remains that it was the anti-Trump crew at the DOJ, at the Pentagon, and in this swamp called DC that were engaging in activities that were truly chipping away at our institutions. Trump was in the way for these people. He had to go by any means necessary, even if it means committing alleged acts of treason like in the case of Gen. Milley. Trump’s ex-Secretary of Defense now says that he would not have authorized any such calls in the waning days of the Trump administration, calling Milley’s actions “disgraceful” (via Fox News):

Former acting Secretary of Defense Christopher Miller, who led the Pentagon from the period after the 2020 election through Inauguration Day, said that he "did not and would not ever authorize" Chairman of the Joint Chiefs of Staff Gen. Mark Milley to have "secret" calls with his Chinese counterpart, describing the allegations as a "disgraceful and unprecedented act of insubordination," and calling on him to resign "immediately."

In a statement to Fox News, Miller said that the United States Armed Forces, from its inception, has "operated under the inviolable principle of civilian control of the military."

"The Chairman of the Joint Chiefs of Staff is the highest-ranking military officer whose sole role is providing military-specific advice to the president, and by law is prohibited from exercising executive authority to command forces," Miller said. "The chain of command runs from the President to the Secretary of Defense, not through the Chairman."

Miller went on to reference the allegations, which are included in the book "Peril," co-written by Washington Post reporters Bob Woodward and Robert Costa, that Milley made two secret phone calls, both to his Chinese counterpart, Gen. Li Zuocheng of the People’s Liberation Army. The book alleges that the phone calls took place prior to the 2020 presidential election, on Oct. 30, 2020, and then two days after the Jan. 6 Capitol riot, on Jan. 8, 2021.

The book claims Milley contacted Li after he had reviewed intelligence that suggested Chinese officials believed the United States was planning an attack on China amid military exercises in the South China Sea. The authors of the book also claim Milley contacted Li a second time to reassure him that the U.S. would not make any type of advances or attack China in any form, as Milley promised, "We are 100% steady. Everything’s fine. But democracy can be sloppy sometimes."

Biden says he trusts Milley. Well, that’s all you need to know about the judgment of our so-called commander-in-chief.

Senior Defense Official confirms to me @axios reporting on Esper's role in China calls.
"Milley was absolutely not going rogue. Esper took the initiative on this in October, Esper asked his own policy folks to backchannel the message. Milley’s message followed Esper’s."

To be clear, Esper’s message to other countries — conveyed by OSD staff — was one of general reassurance and keeping lines of communication open. It did not include specifics reported in Woodward’s book about a purported Milley promise to warn China before any attack.