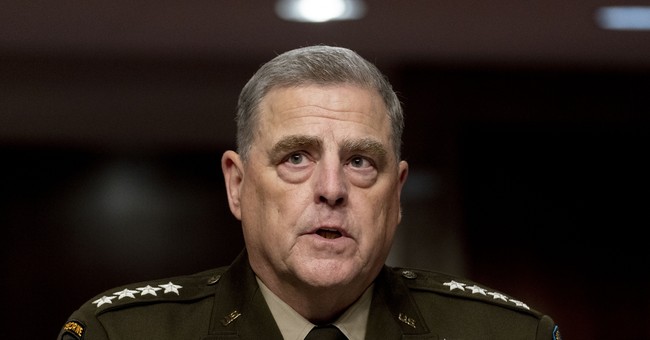 New reporting from The Washington Post, detailing the contents of a new book, shows General Mark Milley reassured China's People's Liberal Army General Li Zuocheng that he would give the communist country a heads up if President Donald Trump launched an attack in the final months of his presidency. He did so in a series of reported phone calls and reassured Li he would stand between Trump and an attack on Chinese assets.

In a pair of secret phone calls, Gen. Mark A. Milley, the chairman of the Joint Chiefs of Staff, assured his Chinese counterpart, Gen. Li Zuocheng of the People’s Liberation Army, that the United States would not strike, according to a new book by Washington Post associate editor Bob Woodward and national political reporter Robert Costa.

“General Li, I want to assure you that the American government is stable and everything is going to be okay,” Milley told him. “We are not going to attack or conduct any kinetic operations against you.”

In the book’s account, Milley went so far as to pledge he would alert his counterpart in the event of a U.S. attack, stressing the rapport they’d established through a backchannel. “General Li, you and I have known each other for now five years. If we’re going to attack, I’m going to call you ahead of time. It’s not going to be a surprise.”

Believing that China could lash out if it felt at risk from an unpredictable and vengeful American president, Milley took action. The same day, he called the admiral overseeing the U.S. Indo-Pacific Command, the military unit responsible for Asia and the Pacific region, and recommended postponing the military exercises, according to the book. The admiral complied.

Milley also summoned senior officers to review the procedures for launching nuclear weapons, saying the president alone could give the order — but, crucially, that he, Milley, also had to be involved. Looking each in the eye, Milley asked the officers to affirm that they had understood, the authors write, in what he considered an “oath.”

In other words, Milley instructed senior officers to obey his orders and to ignore those given by the President Trump, the duly elected commander-in-chief.

The outrageous behavior has sparked additional calls for Milley to resign and even for his arrest.

If Milley told the PLA about any proposed or likely military action or agreed to give warning of such he committed TREASON pic.twitter.com/7tFVMYZWZp

Milley needs to be arrested for treason. Congress needs to act on this now since we all now the Biden admin won’t do anything pic.twitter.com/WQEsnrqkaq

I know we’re supposed to be all worried about how crazy Trump was in this story but this, if true, is legit treason. pic.twitter.com/BmXmZlHPyX

If that Milley story is true he has to go immediately.

If this is true GEN Milley must resign. He usurped civilian authority, broke Chain of Command, and violated the sacrosanct principle of civilian control over the military. It’s an extremely dangerous precedent. You can’t simply walk away from that. #dotherightthingintherightway https://t.co/izsMMCFPrz

Holy crap. When even **this guy** says you've gone too far in breaking chain of command and engaging in treasonous behavior, you know you've gone way, way, way too far. https://t.co/0sBJvftg0e

Former Director of National Intelligence Richard Grenell is skeptical about the story.

Bob Woodward has become the Michael Wolff of Washington, DC.

It’s hard to believe anything the two of them write.

Trump isn’t a war starter and I don’t believe Milley thought he was. https://t.co/4KAX8vLQi1

Once again, Vindman shows he acts on gossip and innuendo. https://t.co/EnovkNshed