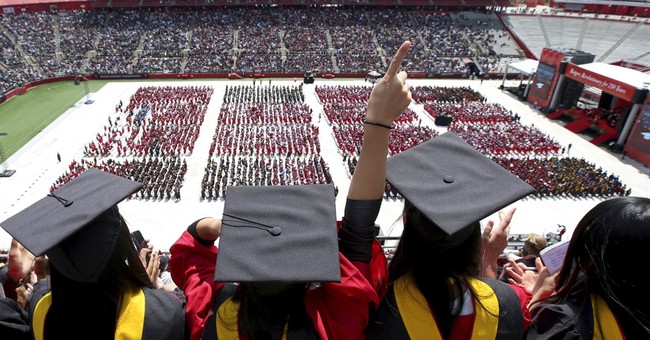 College campuses are formulating their own policy on COVID. Some have enacted vaccine mandates. Rutgers University in New Jersey has such a policy, and it has screwed one student out of his education. He’s not taking in-person classes. Logan Hollar is 100 percent remote this semester, so, he didn’t bother to abide by the campus’ policy. He didn’t need to—he wasn’t going to be around people. Well, he’s missing classes now. He’s been locked out of his college email. And now it might take weeks for him to get an exemption. At this point, he’s considering transferring.  It's peak insanity here. A remote student is barred from taking his…remote classes.  Hollar’s stepdad also had some very scientific-based words for Rutgers’ COVID policy (via NY Post):

Logan Hollar, 22, told NJ.com that he largely ignored the school’s COVID mandate “because all my classes were remote” from his Sandyston home, some 70 miles from Rutgers’ campus in New Brunswick.

But he was locked out of his Rutgers email and related accounts when he went to pay his tuition at the end of last month — and was told that he needed to be vaccinated even though he has no plans to attend in person.

Hollar has now been forced to miss classes that started Sept. 1 — and has been warned it could be weeks before a decision is reached on his application for an exemption to the vaccine mandate, he said.

“I’ll probably have to transfer to a different university,” Hollar told NJ.com, saying he knows of at least one other student in the same position.

“I find it concerning for the vaccine to be pushed by the university rather than my doctor,” he told the outlet.

Hollar’s stepfather, Keith Williams — who has been vaccinated — told the outlet he is “dumbfounded” at Rutgers’ stance.

“I believe in science, I believe in vaccines, but I am highly confident that COVID-19 and variants do not travel through computer monitors by taking online classes,” Williams told NJ.com.

You never know, we might hear that Rutgers requires remote students to mask up during their remote classes out of respect, right? Masks were never about safety because the masks we wear don’t curb the spread of COVID; Fauci admitted that in his emails. It’s about control. That’s it. I’ve been vaccinated, but it’s still one’s choice. This isn’t some superbug. It has a recovery rate that soars past 90 percent. The vaccination rates probably could have been better if the so-called experts didn’t peddle science fiction about it for weeks.