Biden Administration Was Dragged for These Insane Remarks About the Taliban 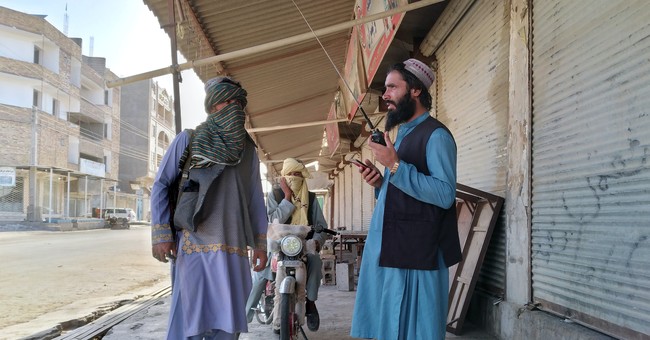 Why are they so bad at this? Why are Democrats so bad at this? I can’t believe this needs to be said, but trusting terrorists is never good foreign policy. The group that gave Osama bin Laden safe haven is being trusted right now by the Biden White House. The very people we invaded to purge from the country forever are being trusted by us. It’s Kafkaesque. We trusted these terrorists to be the TSA for Hamid Karzai Airport (name subject to change). We gave them lists with names of Americans and key Afghan allies at their checkpoints. These are pretty much kill lists now that all American forces have left the country. So, what do we do now? Oh, we sent strongly-worded statements like the Taliban better do this, that, and the other or…they’ll pay or something. It’s pathetic. It’s a toothless warning. It’s political theater because they know we’re not going back. Also, we’re trusting these people with counterterrorism now. The terrorist group is being asked to conduct such operations. It’s pure hilarity.

The Taliban needs to meet its commitments and obligations in Afghanistan on freedom of travel, respecting basic rights of the people, upholding its commitments on counterterrorism, not carrying out reprisal violence against those who stayed, and forming an inclusive government.

The Taliban needs to meet its commitments and obligations in Afghanistan on freedom of travel, respecting basic rights of the people, upholding its commitments on counterterrorism, not carrying out reprisal violence against those who stayed, and forming an inclusive government.

They’re cutting out translator’s tongues, executing people publicly then dangling the dead bodies from the US helicopters you gifted to them.

I think we’re past the “meeting commitments” and “inclusivity” part of your script. What’s on the next page? https://t.co/rFaiXF25l0

Yes, we need to immediately deploy some consultants to assist the Taliban in building a Department of Diversity, Equity, and Inclusion!

Taliban source tells CNN they’re concerned ISIS K fighters have “been melted” with the Taliban in Kabul and it’s very challenging to distinguish them from legitimate Taliban fighters. This makes securing the capital a challenge.

This is never going to happen. Women’s rights are dead. Oh, and the “not carrying out reprisal violence against those who stayed” bit is dead. They’re hanging people from Black Hawk helicopters and flying the bodies around. They’re reportedly cutting out the tongues of translators who helped our forces. The executions are beginning. These are radical Islamists and inclusivity is not baked in the cake. We all know this. Biden’s people do not.