'You Cannot Make This Up': Ex-Afghan President's Brother Is the Newest Member of the Taliban 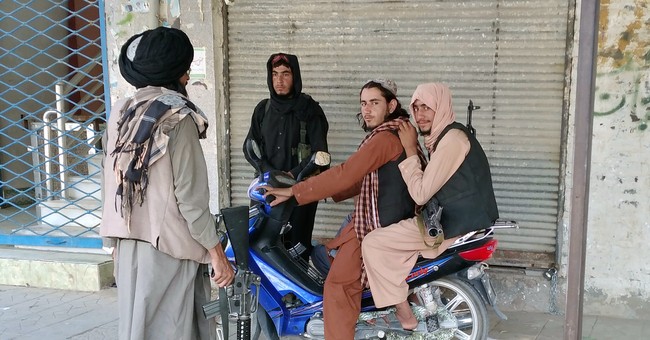 We have suffered our fair share of humiliations with our exit from Afghanistan. The Biden White House didn’t see it coming even though some people at the State Department and the Intelligence Community did. They sent memos throughout the summer. Granted, everyone also seems to have turned a blind eye towards the Taliban paying off Afghan army commanders, but you know that story. After 20 years of warfare, we’re right back to where we started from in the country—with the Taliban in control. It’s an ignominious way to depart. It’s compounded by the chaotic scene in Kabul where we’re now forced to trust the Taliban with the safety of our citizens trying to get to the airport. Over 600,000 US-made weapons are now in the hands of the Taliban. Some undoubtedly will be sold on the black market. And finally, the brother of the now-former president of Afghanistan, Ashraf Ghani, has now joined the Taliban. Talk about a coup de grâce plunge right there.

The brother of now-former #Afghanistan president Ashraf Ghani has reportedly joined the #Taliban. You can’t make this stuff up. #DefundTheCIA
pic.twitter.com/vfVLdnJsgY

Was it time to leave? Sure. Did it have to be this way? No. Biden was just obsessed with the August 31 departure date that he pretty much chucked everything else up to luck. Every reporter on the ground shredded remarks he made over the past week about conditions on the ground. It’s mayhem. The Taliban have set up checkpoints. You cannot get to the airport. Our allies are mad, and yes—Americans are being beaten. Not even Biden’s own officials can go with him all the way on his gaslighting.

Is it just as bad as the Taliban mocking the iconic flag-raising on Iwo Jima? You decide (via Fox News):

Propaganda videos posted this week on channels affiliated with the Taliban show soldiers in the little-known Badri 313 Battalion carrying U.S. and U.S. ally-made weapons and gear that appear to be stolen from allied militaries while patrolling parts of Kabul.

In one propaganda photo, members of the Badri 313 Battalion are seen hoisting a Taliban flag in a similar fashion to the six U.S. Marines who raised the U.S. flag on Mount Suribachi during the Battle of Iwo Jima in 1945.

It’s a mess. A mess that this administration thought they could ignore, and that the media should ignore, when the Taliban rolled into Kabul last weekend. Joe was on vacation as the nation crumbled with 10-15,000 Americans trapped behind enemy lines. Oh yes—please keep talking about how we have adults back in the White House. It’s a nursing staff keeping a barely cognizant president functional.