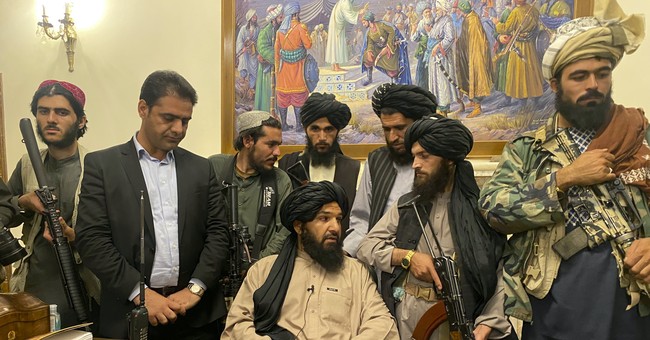 This isn’t new, folks. We all know women’s rights in Afghanistan are dead. The Taliban are back. They’ve taken over. They’re going to close girls’ schools. The burqas are coming back. It’s only a matter of time. When all Americans are out of the country and the last remaining ground troops are out—the full force of Sharia law will be enforced. How is this a secret? How is this news? They said they would respect women’s rights based on how they interpret Islam. That means no rights. None. Earlier this year, Vice News was able to speak with members of the Taliban. This was part of their series that's now on Showtime.

The episode aired in March. These terrorists were asked if they would respect the democratic vote and allow people to vote for female politicians. It caused these Taliban members to laugh.

He directs the Vice crew to stop filming.

"It made me laugh," the commander said.

I mean, seriously—what were you expecting them to say?

Hell no. I get that when scoring an interview like this, you should ask whatever questions you have since this could be a one-and-done opportunity, but really? Sharia law is at the heart of the Taliban philosophy. It’s a core tenet—and there’s not a scintilla of western liberal democratic ideals in there. This is like asking Nazis in the 1930s if Jewish people will have their rights respected. You’re asking a question that is diametrically opposed to the core of this evil movement. Of course, these guys got a chuckle. At the same time, you got a glimpse of what is to come now that the Taliban is back in power.