Watch: French Police Check COVID Passports, But It's the Reactions That Are More Disturbing 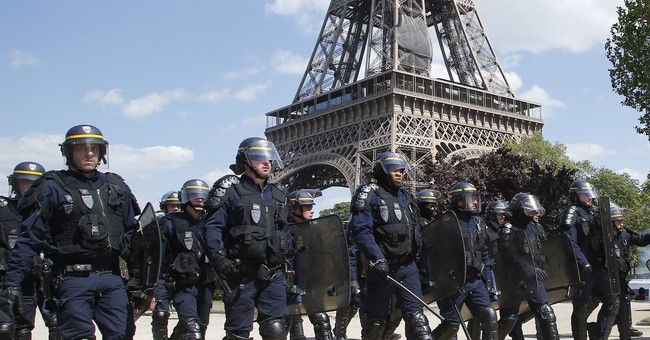 They want this to happen here. You know Democrats, Biden, Anthony Fauci, and the CDC want to have a similar system as they have in France regarding COVID. The CDC especially since they’re now some secret government body after the illegal extension of the eviction moratorium. They dictate all policy now, or so it seems. Joe Biden just shrugs and nods his head at whatever they tell him. But a video from Paris shows French police going up to ordinary folks who are just eating and drinking at cafes to check if they’re supposed to be there. Do they have their COVID passports? The policy went into full effect recently and the video captures these French citizens being totally okay with it, which is the most disturbing part.

Dystopian nightmare that people claimed would never happen. Papers please in order to eat food at an outdoor restaurant with police roaming aroundpic.twitter.com/NGkSYMpoky

I guess they forgot who invaded them in 1939. https://t.co/GpIgoCrNju

Just amazing to me how the French are like "yes this is ok" https://t.co/W50erzGbQH

Now, while Europe and the United States are very different when it comes to the principles of freedom—there were protests over this policy, and rightfully so. It’s rather authoritarian and you know the government won’t stop here after COVID has long since passed. ANYTHING will be turned into an ‘emergency situation’ that requires documentation. That’s how government works, the more power you give it—the more oppressive it becomes (via Fox News):

Thousands of people marched in Paris and other French cities Saturday for a fourth consecutive week of protests against the COVID-19 health passes that everyone in the country will need shortly to enter cafes, trains and other venues.

The demonstrations came two days after France’s Constitutional Council upheld most provisions of a new law that expands the locations where health passes are needed to enter.

Starting Monday, the pass will be required in France to access cafes, restaurants, long-distance travel and, in some cases, hospitals. It was already in place for cultural and recreational venues, including cinemas, concert halls, sports arenas and theme parks with a capacity for more than 50 people.

With French riot police on guard, a largely peaceful crowd walked across Paris carrying banners that read: "Our freedoms are dying" and "Vaccine: Don’t touch our kids." Some were also upset that the government has made COVID-19 vaccines mandatory for health care workers by Sept. 15.

Dozens of street protests took place in other French cities as well, including Marseille, Nice and Lille. The French Interior ministry said there were 237,000 protesters nationwide, including 17,000 in Paris.

Polls, however, show that most people in France support the health passes, which prove that people are vaccinated, have had a negative recent test or have recovered from COVID-19.

That last part right there explains the blasé attitude in the video. The sad part is if this was enacted here, sure there will be lawsuits filed by certain groups and individuals, but this would be accepted as well. The great irony is that for all the Left’s talk about ‘defunding the police,’ they’ll need them and a lot more of them to enforce this passport idea that’s being floated among the political class, big tech, and so-called COVID experts.