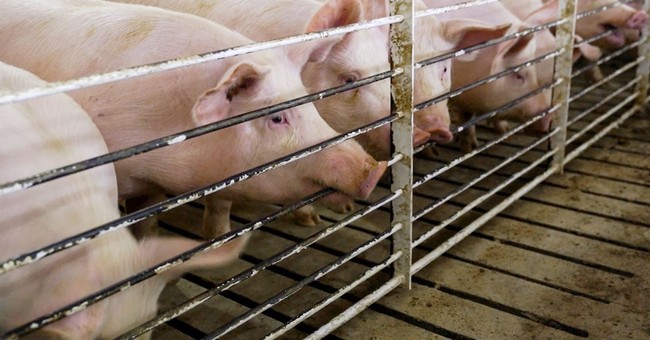 This is what we sent GOP senators to do, huh? They side with the Democrats and the Biden administration to pass a pork-filled bill and give this White House a huge legislative win. Is that what we voted for in 2020? And these clowns wonder why the base is enraged and willing to back unconventional candidates to shake up this town. It’s why Donald Trump won in 2016. It’s why he was able to dominate what was considered a deep field with regards to being traditional ‘Reagan conservatives.’ Seventeen Republican senators decided to back this $1.2 trillion dollar infrastructure deal boondoggle. It’s over 2,600 pages long. Did they read what’s in it? Probably not, but ‘Oilfield Rando’ who was mentioned in last week’s episodes of the Triggered podcast, analyzed and reviewed the pork buffet in this bill. Oh, and it’s only the first 666 pages or around 25 percent of the bill. Make yourself a drink for this one. Rando makes notes of which projects were most definitely tailored to buying votes on the GOP side of the aisle, like the $100 million Denali Commission provision that probably secured Sen. Lisa Murkowski’s (R-AK). Here are some of the items thus far (via Oilfield Rando):

$550 million for the Technology and Innovation Deployment Program

$127.5 million for Training and Education

Grants to colleges and universities for transportation research and development

$132.5 million for the Bureau of Transportation Statistics

The BTS director is by law Mayor Pete's senior advisor

Could have just taken a Lean Six Sigma course?

Also a public awareness campign to warm us up to it.

The advisory board for the program must include "advocacy groups focused on equity".

The study will assess using bauxite on roads (has been done forever), and also incorporate renewables into pavement design.

A new "Center of Excellence on New Mobility and Automated Vehicles"

And remember this is just 25 percent of the bill. Look, I’m not anti-infrastructure. We need a bill that addresses our roads and bridges. It’s a government appropriation that should happen—and it should be big. I’d actually be okay with a $1.2 trillion bill if it wasn’t so covered in crap. Like with anything in DC, there’s what should happen, and what’s going to happen. This massive waste in federal spending will probably pass. It’s the grease to the larger $3.5 trillion reconciliation bill that’s even worse. Yes, Sen. Kyrsten Sinema (D-AZ) is not here—she’s on vacation, but Sen. Lindsey Graham (R-SC) is isolating due to contracting COVID, so the chamber is split 49-49 on this one with Kamala Harris as the tie-breaker. This bipartisan lovefest, plus the reconciliation bill, will add trillions in new spending and the CBO recently graded the infrastructure deal that the GOP signed off on as one that would add $256 billion to the deficit over eight years. It’s not paid for, which I thought was one of the selling points. And all of this as inflation is soaring and the Treasury Department is under emergency conditions, spending its cash reserves to fund government obligations since the deadline to raise the debt limit has long since passed. Those funds run out in about two-to-three months. Also, the government itself runs out of money on September 30 without a budget, so we’re all sorts of screwed here. We’ve mentioned this before, but if I were a Democrat, I’d wait until I can roll everything and more into a must-pass resolution in late September. I have the media in my pocket. I have a Democrat behind the bully pulpit of the presidency. There’s no way I can lose. Sick stuff to always keep in mind.