Is This Really the Most Pressing Issue in the Aftermath of the Surfside Condo Collapse? 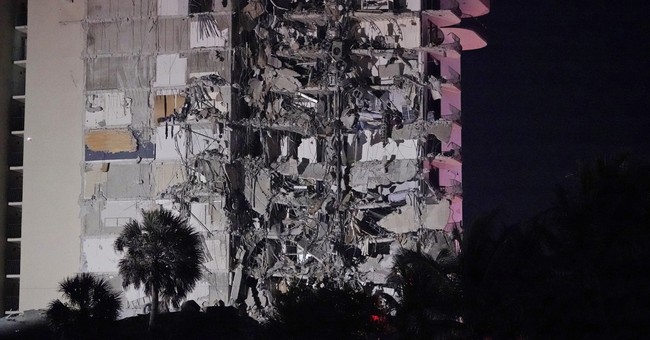 The condominium is no more. The rest of the complex was demolished in a controlled explosion after half of it collapsed on June 24. The death toll has soared past 30, but nearly 100 remain missing. Isn’t that the most pressing concern? Rescuers said they heard a woman’s voice in the rubble. This came as they had to pause relief efforts due to safety concerns. No, we must toss in a COVID grenade. Some in the media decided to focus on the irrelevant by highlighting six new COVID cases that arose from recovery efforts (via The Hill):

Miami-Dade Fire Chief Alan Cominsky said Saturday that at least six firefighters who had been assisting in search and rescue efforts at the site of the Surfside, Fla., condo building collapse have tested positive for COVID-19.

The fire department head confirmed the news at a press briefing Saturday morning, saying that members of a Florida task force from outside Miami-Dade that had traveled to the area reported the positive tests.

Cominsky said that the specific task force has since left the area and that following the positive tests, COVID-19 testing was conducted on “all 424 Florida task force members in addition to the ones that were from the task force that left.”

The outbreak comes as rescue efforts are likely to be complicated by Tropical Storm Elsa, which is quickly approaching Florida, prompting officials to push up their planned demolition of the remainder of the condo building to as early as Sunday to prevent any storm damage to the structure.

People are dead, many more still missing, and a tropical storm that’s now pounding the state, but let’s hurl some COVID hysteria. I doubt that the families of those who are still wondering about their loved ones have time to deal with this update. COVID is over. We have three vaccines that are effective, including the Delta variant. Deaths are down 94 percent from their peak last January. Focus on the recovery effort, folks. No one really cares about COVID in this tragic situation.