NY Islanders' Fans United and Did Something That Should Give You Chills...And It Probably Triggered Libs 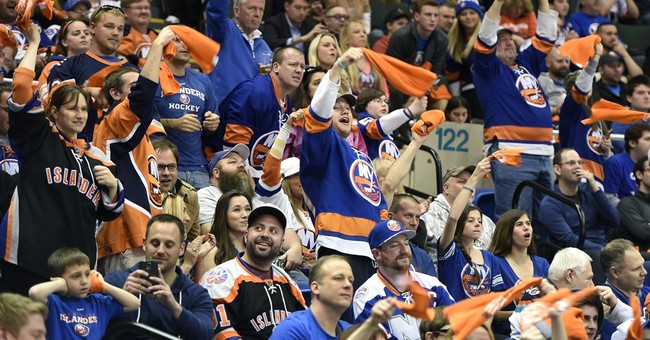 Well, congratulations, New York Islanders fans. You’re in the semifinals of the Stanley Cup Playoffs. You picked off the Bruins in six games. And you also gave us chills. Well, for real Americans, it gave us chills. Prior to the start of game 6, singer Nicole Raviv kicked off the event with her rendition of the Star-Spangled Banner, but she had back-up, which was an arena filled with Islanders fans who were eager to put this series away.

The Coliseum comes together for the anthem. ????#Isles pic.twitter.com/7HCVMjM2To

This was awesome. Long Island loves the anthem, don’t even need a singer https://t.co/PQYN2S2i95

My heart is full. The coliseum will forever have the best backup singers in the #NHL.#LGI pic.twitter.com/iOj0KqI3YL

The Nassau Coliseum was alive last night with playoff fever and a tremendous display of national pride. I’ve been told these demonstrations of patriotism are rooted in racism and whiteness, and that displaying the American flag is a disturbing gesture.

There’s nothing wrong with the American flag but Mara Gay was right.

Anyone who flies an American Flag on a pickup truck is a whole different breed of white people.

This is what Mara Gay is talking about.

I'll speak for myself here: I've folded countless American flags for the loved ones of fallen service members, and when I see this, all I can think is: "Yeah, that person is definitely an asshole and most likely a coward." pic.twitter.com/mhgj6j0rlP

What happened last night before the game probably triggered liberals. It certainly should make critical race theory proponents nervous. It showed that Americans…love this country. I know, it’s a true shocker. Only the most miserable people on the planet obsess about race issues. To ensure they’re not the only ones, they try to find converts, shame others who don’t follow, and use the media, who eat this stuff up, to make it seem more popular than it is. It’s not. This is a virus and scores of Islanders fans showed just how popular it is to bash America last night. News bulletin: it isn’t.

The Islanders now go on to face the team that eliminated them in the playoffs last year: the Tampa Bay Lightning.

Wow, this display must have been highly disturbing to at least one NYT editorial board member — and it happened on Long Island, no less! ???? https://t.co/FSTwq1CQ79