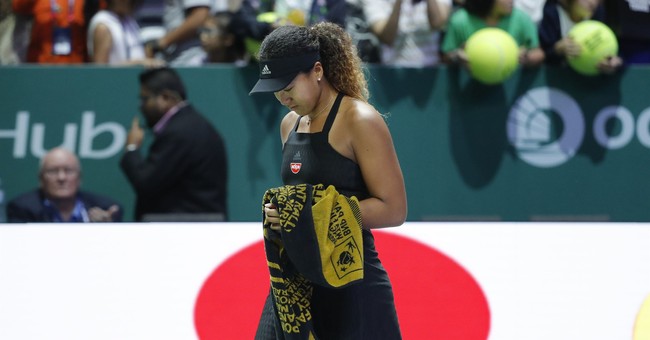 Hillary Clinton is bored. That can be the only explanation why she decided to weigh in on the Naomi Osaka fiasco at the French Open. The professional tennis player and four-time grand slam champion decided to pull out of the tournament because she didn’t want to speak to the media. She made that known before the start of the tournament and faced a $15,000 fine. Reportedly, she was threatened with being expelled from the French Open if she refused to do interviews (via NPR):

Naomi Osaka is walking away from the French Open after a standoff with the sport's top officials over her refusal to attend news events with reporters.

"Hey everyone, this isn't a situation I ever imagined or intended," Osaka wrote in an Instagram post. "I think now the best thing for the tournament, the other players and my well-being is that I withdraw so that everyone can get back to focusing on the tennis going on in Paris."

The move came after an unexpected clash with tennis officials. Osaka is a four-time Grand Slam champion, arguably the greatest female tennis player of her generation and the highest paid in terms of endorsements. But after arriving in Paris she announced she wouldn't be attending mandatory news conferences at the French Open, citing, "disregard for athletes' mental health."

The French Tennis Federation announced a fine of $15,000 and Osaka was facing further fines and possible expulsion from the tournament if she continued to refuse to attend media events.

I’m inspired by @NaomiOsaka’s courage. This is a moment for all of us—especially the press—to ask why it’s not enough to let her stellar performance on the court speak for itself.

Well, the former first lady and two-time presidential loser admired Osaka’s courage for withdrawing over refusing to speak to reporters. As liberal writer Michael Tracey noted, that’s something the two women share with regards to being uncomfortable with the press: they flee. This is a ‘first-world problems’ story. Ms. Osaka has made boatloads of money, she’s a professional athlete, and doing interviews is part of the job. Sorry, she beat Serena Williams, the greatest female player of all time, during her career—she’s going to be sought after by the press. She claims she has anxiety speaking to the media. Okay, you made $55 million—she could get some assistance with that. Why did she even play a match if the anxiety was too much?

I can fully understand why Hillary would be "inspired" by Naomi throwing a pity-party at the prospect of being presented with mildly uncomfortable questions https://t.co/G9IWVo8ijq

She's the #2 ranked women's tennis player in the world and her lifetime winnings are $19,773,132 at age 23, but she desperately needs our "empathy and help." OK pic.twitter.com/HSAc4EnA3z

*Overall, she actually earned $55+ million in 12 months, the most of any woman in professional sports. But according to pundits and social media scolds, you, the average citizen, have an affirmative obligation to provide her with “empathy and help” pic.twitter.com/fdiUXRhfyp

But Hillary offered her protection, so any criticism is heartless, right?  Sorry, inflation is rising. People are still looking for jobs post-COVID and we have the wealthy, coddled elite of professional sports being viewed as heroes for…running away from the media. That’s a profile in courage. It’s eye-roll-worthy. I hope Ms. Osaka can deal with her issues, but she shouldn’t expect pom-pom cheers, except for those who also in this elite class. She made $50+ million and she can’t handle the media. Again, really?