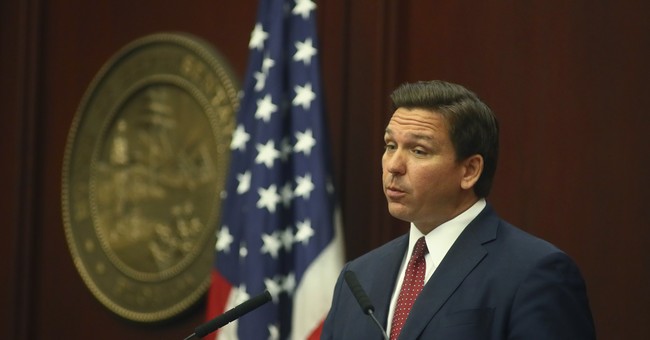 Florida Gov. Ron DeSantis promised to end this woke nonsense surrounding social media bans. Donald Trump has been purged from Facebook and Twitter—and that was when he was still president. The leader of the free world was banned. So, to prevent politicians from being muzzled, Florida has passed a law that would ban these companies from enacting bans. He put Big Tech on notice this February, and now it’s here (via The Hill):

The Florida House and Senate voted this week to pass legislation that would prohibit social media companies from banning politicians.

Fines for social media companies that try to ban politicians from their platforms could add up to $250,000 a day for statewide politicians and $25,000 a day for other elected officials, the Sun-Sentinel reported.

The bill, which still allows for politicians to be suspended for two weeks and for individual posts to be taken down if they violate the company’s policies, is now headed to Republican Gov. Ron DeSantis.

.@GovRonDeSantis Announcing Some Of The New Regulations The State Of Florida Will Seek To Enact To Deal With Big Tech & How They Will Be Enforced 2/ pic.twitter.com/YnqEtUGdBR

.@GovRonDeSantis: "Under our proposal, if a technology company de-platforms a candidate for elected office in Florida during an election that company will face a daily fine of $100k until the candidate's access to the platform is restored." 3/ pic.twitter.com/jCceBB8zsk

Of course, this bill has been branded as unconstitutional by opponents. Yes, they’re still viewed as private companies, but maybe this will spark a debate about the function of these companies. It’s gone beyond just posting stuff. They’re used for commerce, information sharing, and charity. It’s more of a public utility now—and that should bring them under the umbrella of government regulation. The woke zealots who run these companies are taking cues from the liberal media and the Democratic Party to censor conservatives. It’s just another day of conservative America facing Goliath. And we need to start getting slingshots ready.