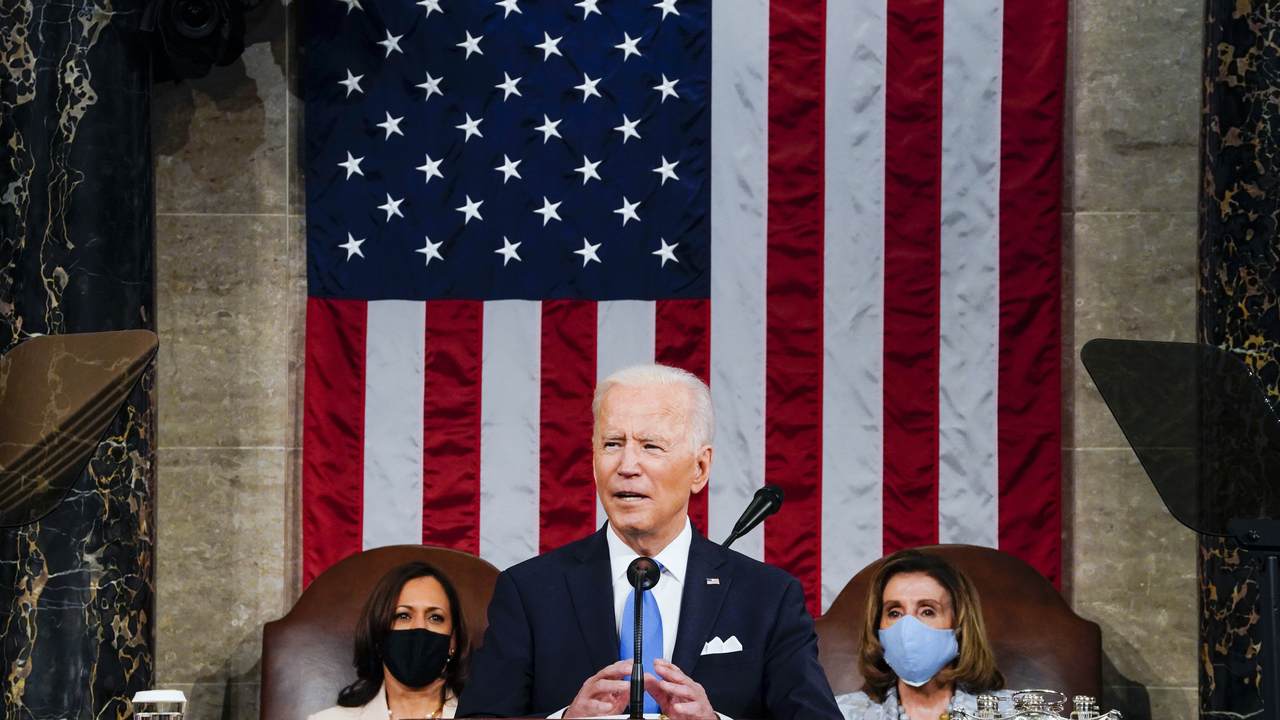 President Joe Biden delivered a snooze fest of a speech that House Minority Leader Kevin McCarthy (R-CA) aptly noted could have been sent in an email. It was a rather lengthy speech for a president who is known to hit the sack early. It was loaded with poll-tested terms. It was a recipe for disaster economically, and it was served with a steaming pile of lies. Here are the top five.

Lie #1: The Trump Tax Cuts Were a Disaster

Look, the big tax cut of 2017 — remember, it was supposed to pay for itself — that was how it was sold — and generate vast economic growth.  Instead, it added $2 trillion to the deficit.  It was a huge windfall for corporate America and those at the very top.

Really, Joe? If they’re so bad, why is your administration primed to make most of that Trump tax package permanent? It allowed for the repatriation of billions of dollars overseas, created more than three million jobs, allowed companies to reinvest and give bonuses to workers. Small business and consumer confidence went through the roof due to this package. And the middle class got relief. CBS News did a story on three families from across the country from very different economic backgrounds — and all of them benefited from the Trump tax plan. Even Sen. Bernie Sanders said that it was a good thing that the Trump tax cut offered middle-class relief. It’s simply just a lie that the package only benefited the super-wealthy.

In the ’90s, we passed universal background checks, a ban on assault weapons and high-capacity magazines that hold 100 rounds that can be fired off in seconds.  We beat the NRA.  Mass shootings and gun violence declined.  Check out the report in over 10 years.  But in the early twe- — 2000s, the law expired, and we’ve seen daily bloodshed since.  I’m not saying if the law continued, we wouldn’t see bloodshed.

No, Joe. This is a lie that even liberal reporters cannot even polish anymore. Rifles then as they are now are not the leading cause of death in firearm homicides in this country; knives kill more people than rifles. It’s handguns. And we all know how handgun bans poll with voters—it’s rather miserable.

So, let’s circle back to Lois Beckett, a liberal gun reporter, who wrote this about the ban on so-called "assault weapons" for The New York Times in 2014:

…in the 10 years since the previous ban lapsed, even gun control advocates acknowledge a larger truth: The law that barred the sale of assault weapons from 1994 to 2004 made little difference.

The continuing focus on assault weapons stems from the media’s obsessive focus on mass shootings, which disproportionately involve weapons like the AR-15, a civilian version of the military M16 rifle. This, in turn, obscures some grim truths about who is really dying from gunshots.

…when the ban expired, a detailed study found no proof that it had contributed to the decline.

The ban did reduce the number of assault weapons recovered by local police, to 1 percent from roughly 2 percent.

Now, the law did decrease one thing in America: the number of Democrats on the Hill. They got wiped out in the 1994 midterms. Speaker of the House Tom Foley lost his re-election bid, the first speaker to lose since Galusha Grow in 1863. Bill Clinton blamed the assault weapons ban for the losses, and he’s probably right. That law coupled with the 1992 House banking scandal created a perfect storm that would wreck the Left in the midterms. So, please, Joe—repeat history with this push.

So, how do we pay for my Jobs and Family Plan?  I made it clear, we can do it without increasing the deficits.  Let’s start with what I will not do: I will not impose any tax increase on people making less than $400,000.  It’s — but it’s time for corporate America and the wealthiest 1 percent of Americans to just begin to pay their fair share.

Biden wants to overhaul the economy, pay for federally-mandated childcare, push for universal healthcare, and forgive all college debt—and he thinks he can do this with tax hikes on the rich. Well, for starters, he is giving the rich something of a break by not seeking to hike death taxes for now—but Biden will find ways to screw over the middle class. One way is eliminating the stepped-up basis for property assets, farms, and businesses. InsideSources had a good op-ed about this—and how it will hit the middle class hard. This is the government. It will always find a way to screw you. Obama raised taxes on the middle class through payrolls, so they will find a way.

Lie #4: The COVID Vaccine Is a Biden Initiative

After I promised we’d get 100 million COVID-19 vaccine shots into people’s arms in 100 days, we will have provided over 220 million COVID shots in those 100 days.

pharmacies and over 700 Community Health Centers where the poorest of the poor can be reached.  We’re setting up community vaccination sites, developing mobile units to get to hard-to-reach communities.

Today, 90 percent of Americans now live within five miles of a vaccination site. Everyone over the age of 16 — everyone

Well, first, it’s your choice to get the vaccine. Emperor Joe needs to know that. Second, for those on the fence, I can see why you would be hesitant. No, it’s not due to the pause of the J&J vaccine that’s now been lifted. It’s because Dr. Anthony Fauci and the rest of these clowns get vaccinated and then act as if we still can’t get back to normal. Congress is vaccinated—all of them. It could have been a packed chamber with only members of Congress, no masks, no social distancing, but Biden decided to carry on with science fiction theater. Third, the reason we have the vaccine is because of Trump. Operation Warp Speed is why we have a COVID vaccine. The Biden administration changing the name does not erase that. The "100 million shots in 100 days" benchmark was set by Trump. The former president stating that all Americans will be eligible for the vaccine by April 2021 was also initially mocked. Wrong again. Even out of office, Trump still wins. Oh, and remember when everyone said we wouldn’t have a vaccine by the end of 2020? Wrong. We have three now. Even USA Today said the vaccine distribution goal was set up by the Trump administration [emphasis mine]:

Six days before he took office, Biden announced a seemingly ambitious goal of immunizing 100 million Americans within his first 100 days in office. Based on the projected vaccine supplies and pace when he took office, it was a safe pledge.

On Inauguration Day, clinics and mass-immunization sites delivered 1 million shots in the arms of Americans. It was an “instance of underpromising in order to overdeliver,” said Dr. Amesh Adalja, a senior scholar at Johns Hopkins University Center for Health Security.

Biden later revised his goal to 200 million shots in 100 days, a goal the nation met on his 92nd day in office, Biden said Wednesday as he urged businesses to give workers paid leave to get vaccinated. Biden is expected to deliver remarks on the nation's COVID-19 response Tuesday as the Centers for Disease Control and Prevention unveils new guidance for Americans who have been fully vaccinated.

The number of doses was largely based on contracts negotiated by the Trump administration’s all-in vaccine development strategy, called Operation Warp Speed. Devised in the early days of the pandemic, the effort extended agreements to eight manufacturers and six vaccine candidates before the federal government knew whether any would work.

Last spring and early summer, Moncef Slaoui, head of Operation Warp Speed, whittled down 114 vaccine candidates to six that had the highest probability of success, according to Paul Mango, former deputy chief of staff for policy at the Department of Health and Human Services under Trump.

"We handed them a baton and they're running with it. No one could be happier about that than members of the Trump administration," said Mango, who helped oversee Operation Warp Speed. "The allegation that makes us bristle the most is 'We started from scratch.'"

Lie #5: The Capitol Riot Was "The Worst Attack on Our Democracy since the Civil War"

I stand here tonight, one day shy of the 100th day
of my administration — 100 days since I took the oath of office and lifted my hand off our family Bible and inherited a nation — we all did — that was in crisis.

The worst pandemic in a century.  The worst economic crisis since the Great Depression.  The worst attack on our democracy since the Civil War.

Really? This is where we see the Left’s inability to grasp history. First of all, we’re not a democracy. We’re a republic. And this wasn’t "the worst attack" on our country. Symbolically, maybe you could make an argument, but that’s not what we’re talking about here.

The attack on Pearl Harbor is certainly worse, as is the 1993 World Trade Center bombing. Hell, the 9/11 attacks were worse than the riot on Capitol Hill. Shall we go further? I think the British burning the White House to the ground in the War of 1812 is more symbolically damaging. And deep down, there are liberals and Democrats who know this. They just jack up the hyperbole to score political points because they hate us so much.

If you watched something else last night, consider yourselves lucky. To put it succinctly, Biden’s speech sucked. His presidency sucks. And the man sucks. I’d rather watch re-runs of "The Sopranos." At least I know I’m watching something great.