An SNL Skit Featuring Chris Farley That I Can't Believe Hasn't Been Yanked by YouTube...Yet 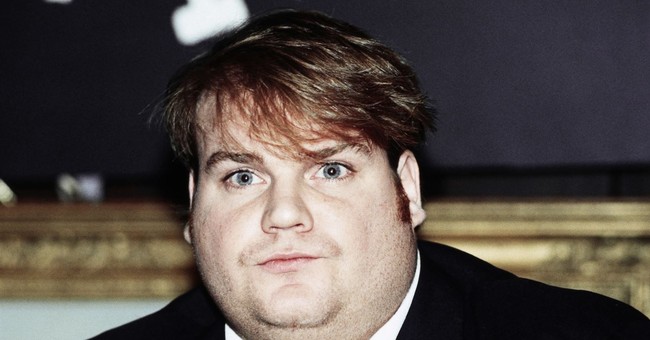 It’s a funny skit. It’s Chris Farley in his element. It’s Mike Myers in his element before he lit himself on fire with that abysmal movie called The Love Guru. It centers on Farley playing an American on vacation in Japan who gets roped into being on a bizarre Japanese game show where the contestants must recite phrases. Those who get it wrong punish themselves by cutting off their fingers to the horror of Farley.

Farley is seen desperately wondering what the hell he’s doing on the stage, while also commenting how lovely his vacation is going. Oh, and he pronounces the Japanese phrases perfectly. Well, good enough for him to earn tons of cash.

I think the skit is hilarious, but Myers plays the game show host. Alec Baldwin and Jeanene Garofalo play Farley’s co-contestants. I bet you can already see why this skit ventures into troubled ‘woke’ waters. All the characters are white. This is ‘yellowface.’ The television show How I Met Your Mother was criticized for having an episode that supposedly exhibited this behavior. Hell, this goes all the way back to the infamous film The Conqueror in which John Wayne plays…Genghis Khan. The film is also infamous for being a killer—literally. Not only was it bad, but John Wayne and other cast and crew members contracted cancer as the film was shot near a former nuclear testing site. Out of 220 people who were involved in this mess of a movie, 91 developed cancer in their lifetime; 46 died of it. Now, John Wayne was a heavy smoker, but shooting a film with high levels of radiation probably didn’t help. Sean Connery was ‘turned’ into a Japanese man in the James Bond film You Only Live Twice. So, this sort of stuff has been going on for a while.

Look, it’s not the most offensive thing. Farley gets electroshocked and the skit plays on the overall bizarreness displayed in Japan’s game show universe. I’m shocked it’s still on YouTube given how ‘woke’ everyone has become at these companies, but it remains for now. Have a laugh. As an Asian, I give everyone permission to have a laugh over this bit.