That's How the Associated Press Covered the Officer-Involved Shooting in Ohio? 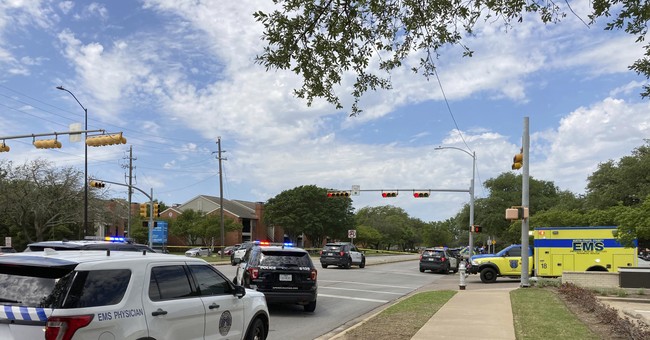 Julio will have more on this story later this morning, but yes—there was another officer-involved shooting in Ohio. And yes, the suspect was armed with a knife. But once again, activists and liberal media outlets decided to hurl misinformation into the vortex about this story.

Here’s how the Associated Press described the incident:

“Police shot and killed a teenage Black girl in Columbus, Ohio, just as the verdict was being announced in the trial for the killing of George Floyd. Bodycam footage appeared to show the girl attempting to stab two people with a knife.”

Police shot and killed a teenage Black girl in Columbus, Ohio, just as the verdict was being announced in the trial for the killing of George Floyd. Bodycam footage appeared to show the girl attempting to stab two people with a knife. https://t.co/sQqfq0n75Z

The footage appears to show that because the footage actually does show that. https://t.co/9veiWQy3up

Via AP [emphasis mine]:

Columbus police shot and killed a teenage girl who swung at two other people with a knife Tuesday, according to bodycam footage from the officer who fired the shots just minutes before the verdict in George Floyd’s killing was read.

Officials with the Columbus Division of Police showed a segment of the footage Tuesday night just hours after the shooting took place in a neighborhood on the city’s east side. The decision to swiftly release the video was a departure from protocol as the force faces immense scrutiny from the public following a series of recent high-profile police killings that have led to clashes.

The 10-second clip begins with the officer getting out of his car at a house where police had been dispatched after someone called 911 saying they were being physically threatened, Interim Police Chief Michael Woods said at the news conference. The officer takes a few steps toward a group of people in the driveway when the girl, who was Black, starts swinging a knife wildly at another girl or woman, who falls backward. The officer shouts several times to get down.

The girl with the knife then charges at another girl or woman who is pinned against a car.

“Appeared.” The girl had a knife. Now, is it unsettling since she was so young? Yes. But the article negates the headline in the first sentence. It gives an aura of doubt when there is none. Why even hurl that out there when the nation is a tinder box right now? Derek Chauvin, the former officer at the center of George Floyd’s death in Minneapolis last year, was found guilty on all counts yesterday, but the area isn’t out of the woods. And the liberal media’s pervasive misinformation isn’t helping.

Daunte Wright was shot and killed in an officer-involved incident in nearby Brooklyn Center. The lie here is that he was pulled over for a car air freshener in the rearview mirror. No, he was driving with expired tags. While Minnesota has a law that prohibits anything hanging from your rearview mirror, the expired tag is the reason why Wright was pulled over. During that traffic stop, Wright was found to have skipped a court date for a weapons charge, hence his attempted arrest and its tragic ending. Officer Kim Potter, a 20+ year veteran, resigned and was later charged with second-degree manslaughter.

In Chicago, Adam Toledo was shot and killed in March. He was only 13-years-old, but he had a gun. It’s on the bodycam footage, which was edited by CBS News. Again, a terrible incident, but false narratives are being peddled with these police shootings. And it’s not like these are small or irrelevant details. The reason behind Wright’s traffic stop is key. An air freshener and an expired tag are two very different things. Toledo holding a gun is key. In the latter incident, the kid was shot around 2:30 in the morning. What was he doing out there? Where were his parents or role models? Because he was reportedly getting his mentorship from local gang members. As for Wright, he was shot by mistake by Potter, but mistakes by cops don’t mean they get off scot-free.

When you lob these fake news grenades, they obviously detonate and the blast radius from the misinformation can be irreparable. Expect Ohio to have some tense days ahead.