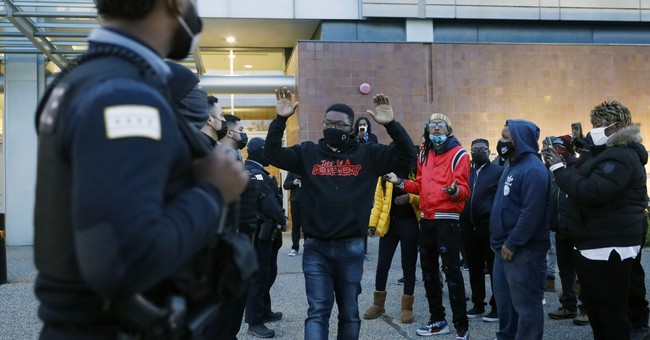 Minneapolis is about to blow up over as the Derek Chauvin trial draws closer to its conclusion. Chauvin is the former police officer at the center of the death of George Floyd which set off a whole summer of rioting, unrest, and looting throughout the country. Brooklyn Center, which is in the greater Minneapolis area, is also on edge after the police-involved shooting of Daunte Wright. And now, we have another officer-involved shooting in Chicago. Adam Toledo was just 13 years old but was armed with a handgun. It’s a terrible incident. It’s sure to ignite more protests. The shooting occurred last month. Mayor Lori Lightfoot urged patience and calm as the evidence is reviewed:

"It was excruciating," an emotional Mayor Lightfoot said when asked for her reaction to viewing the body camera footage. "This is not something you want children to see."

"You're going to see that officer spring into action to try to revive Adam, to call for medical assistance... I've had experience of investigating a number of police involved shootings in my earlier career. I know that most officers go through their whole career and they never fire their weapon in the line of duty. I also know that every time that it's happened, it's extraordinarily traumatizing for them."

"People will have a range of emotions when they see these videos," Lightfoot noted before adding "I hope that people express themselves peacefully."

It’s horrible to watch, but Toledo was armed. It’s clear in the footage, but if you were to watch CBS News’ clip—that frame is omitted. It would seem the hatchet crew at the network went to work to construct yet another false narrative. They went after Florida Gov. Ron DeSantis over a non-existent pay-to-play scheme involving Publix, the state’s largest grocery chain who contributed to his campaign, and a vaccine distribution deal. We’ve seen the full exchange between DeSantis and the reporter who tried to lob this grenade. It blew up in CBS’ face, but they’ve doubled down because they’re all terrible people. This instance is no different (via The Federalist):

Full video here. *At best*, CBS News looked at an explosive issue like a controversial police shooting & prioritized mobile screen viewing optimization over showing the full body camera footage (and thus edited out a key fact leading up to the shooting).https://t.co/b1P814LGjN

CBS News deceptively cropped body camera footage that showed a 13-year-old boy holding a gun before he was fatally shot by Chicago police in March.

A law enforcement officer fatally shot Adam Toledo during an encounter in response to gunshots heard on a police scanner. Police said Toledo ignored “verbal directions, fled, used significant force, and was armed with a semiautomatic pistol,” which is why the officer fired.

Body cam footage released this week appears to show Toledo holding a weapon moments before he was shot, but CBS News posted a clip to its website and Twitter page that cropped out the footage showing the teen’s alleged firearm.

Now is not the time to be playing games or trying to manufacture fake ‘woke’ narratives about policing. I know you good people already know this, but for some—like those in the liberal media—never let a crisis go to waste, even if it means fomenting a situation where a whole city is set ablaze over a lie.