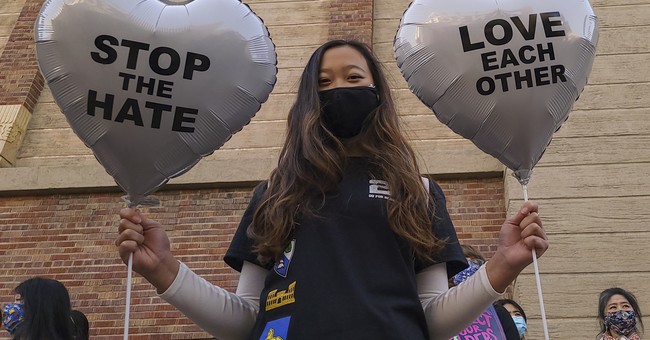 Is the Manhattan Institute trying to get canceled? Their latest report could lead to them being targets of the woke Left, even though it’s a thorough study into the social constructs of racism, with attention to how racial sentiments are often skewed among those who are on social media. I know, it’s something you all probably knew but now here’s a lengthy review to back you up. One of the hooks is that black men are more likely to die in automobile accidents than be shot by the police.

Racial attitudes have improved immensely, by the way. That doesn’t mean more improvements can be made or that racism isn’t a thing—but it’s nowhere near the narrative that has attached itself like a barnacle in the minds of liberal America. Education is also not a factor in determining your view on racial attitudes in America, it’s your ideology. For example, there was a significant drop among black respondents’ belief that they controlled their own destinies after reading a passage relating to critical race theory. It shreds liberal narratives and adds nuance to others. That cannot be allowed in the minds of liberals, especially white liberals. Here are some of the key findings and passages (via Manhattan Institute):

My latest @ManhattanInst report: Young black men in US are far more likely to die in a car accident than to be shot by police. Yet the vast majority of liberal black or white respondents get that wrong. Why? Vivid media narratives, ideology & psychology https://t.co/jKFL6CgUqv pic.twitter.com/ZhLlkC0qHm

This paper begins with a version of Tocqueville’s paradox: at a time when measures of racist attitudes and behavior have never been more positive, pessimism about racism and race relations has increased in America.

Why? An analysis of a wide variety of data sources, including several new surveys that I conducted, suggests that the paradox is best explained by changes in perceptions of racism rather than an increase in the frequency of racist incidents. That is, ideology, partisanship, social media, and education have inclined Americans to “see” more bigotry and more racial prejudice than they previously did. This is true not only regarding the level of racism in society but even of their personal experiences. My survey findings suggest that an important part of the reported experience of racism is ideologically malleable. Reports of increased levels of racism during the Trump era, for example, likely reflect perception rather than reality—just as people have almost always reported rising violent crime when it has been declining during most of the past 25 years. In addition, people who say that they are sad or anxious at least half the time, whether white or black, are about twice as likely as others to say that they have experienced racism and discrimination.

None of this means that racism is an imaginary problem. However, efforts to reduce it should be based on strong empirical evidence and bias-free measures. The risks of overlooking racism are clear: injustice is permitted to persist and grow. Yet there are also clear dangers in overstating its presence. These go well beyond majority resentment and polarization. A media-generated narrative about systemic racism distorts people’s perceptions of reality and may even damage African-Americans’ sense of control over their lives.

Eight in 10 African-American survey respondents believe that young black men are more likely to be shot to death by the police than to die in a traffic accident; one in 10 disagrees. Among a highly educated sample of liberal whites, more than six in 10 agreed. In reality, considerably more young African-American men die in car accidents than are shot to death by police.

Ideology, not education, influences the extent to which people are incorrect on police shootings and traffic accidents.

—Conservative whites are almost 50 points more likely to get it right than liberal whites.

Black Biden voters are twice as likely as black Trump voters to say that they personally experienced more racism under Trump than under Obama. Black Trump voters reported a consistent level of racism under both administrations. Black respondents who strongly agree that white Republicans are racist are 20–30 points more likely to say that they experience various personal forms of racism than African-Americans who strongly disagree that white Republicans are racist.

Reading a passage from critical race theory author Ta-Nehisi Coates results in a significant 15-point drop in black respondents’ belief that they have control over their lives.

A slight majority of African-Americans and whites overall felt that political correctness on race is demeaning to black people rather than necessary to protect them.

Tucker Carlson also mentioned the statistics on police shootings when he did a lengthy commentary on misinformation in the liberal news media and how they, not Q’Anon, have done more damage to the country. He cited the Skeptic Research Center who noted that 44 percent of liberals thought 1,000 unarmed black Americans were shot and killed by police last year. It was actually 27. That’s not a small error and Tucker’s segment unwraps why that might be the case.

Here was more that Stelter's research assistants took out of context. #Tucker had some fun mocking Don Lemon: "'I'm not telling people to go out and riot, but what is the proportional response to mass murder?' Good question, CNN. Burning Wendy's, obviously." (2/2) pic.twitter.com/WKWhTo6iqA