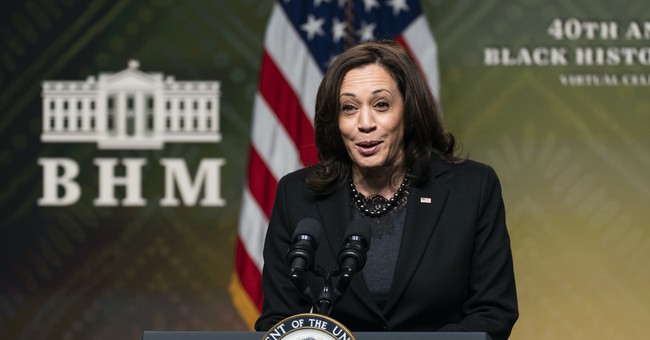 Is it nervousness? What’s Vice President Kamala Harris’ deal? She laughs at horrible times and comes off as even more insufferable than she already is. She’s a coastal elitist. And all these little laughing tics do is highlight that. Take this clip where she laughs at parents struggling to educate their kids during the Covid lockdowns. It’s about the education of our children. It’s about the lost time that will probably cause irreparable harm to childhood development. It’s about how it’s safe to reopen schools. It has been for months—and she turns it into an American Federation of Teachers stump speech.

“More people are seeing that, yeah, affordable childcare is a big deal. More parents are seeing the value of educators when they had to bring their kids and say we're not paying them nearly enough.”

Kamala is always pointing out how women have been the most negatively impacted by the fact that children are unable to go to school during the pandemic. Yet she seems to think it’s hilarious. It’s a slap in the face to all of the parents that have had to endure their lockdowns

Listen I know that politicians are mostly fakes but she really does take it to another level in a frightening way. https://t.co/242EYAoB4b

Who’s seeing that? Sorry, only a detached liberal comes to that conclusion. Teachers still don’t work a full year, and now they’re gumming up the works returning to the classroom, even though it's safe, because…they don’t want to do the work. Period. Never mind the spike in mental health issues, Kamala. Anxiety and depression among students have skyrocketed. Oh, and kids are committing suicide. Are you going to laugh about that? Remote learning has failed. The kids need to go back to school, lady. Parents see teachers being lazy, beholden to the unions, and a major political party, the Democratic Party, kowtowing to their demands. Vote Biden, reopen schools. That was a promise, which has evaporated into the ether.

This lockdown has exposed that teachers’ unions remain horrible constructs that should be smashed into dust. In fact, that applies to all public-sector unions.

School districts are rushing to reopen due to the spike in student suicides. San Francisco is suing its local school board to make that happen; the same goes for Clark County, Nevada. People aren’t thinking about access to childcare. They want to stop their kids from killing themselves and developing a host of mental issues, Kamala. And again, all of this under the backdrop that it’s safe to reopen the damn schools.

As for the laughing, yes, it shows she has liberal hubris, but she’s also a terrible human being. Remember she laughed when asked if she was going to visit the border, which has become a humanitarian crisis zone, thanks to this administration's de facto open borders approach to immigration.