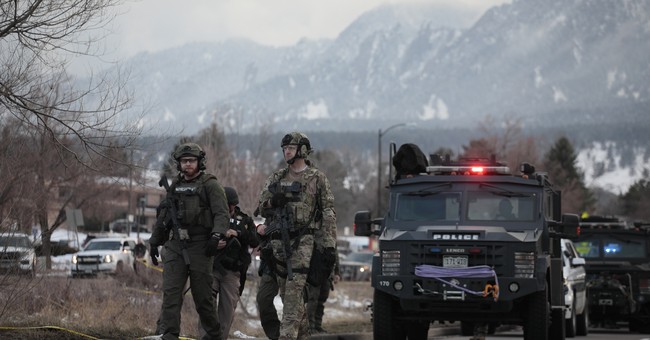 Well, this was going to be an inevitable happening in the liberal news media. The self-righteous lectures from so-called journalists about gun violence in America. Yes, there was another tragic mass shooting in Boulder, Colorado. Ten people were killed. Yet, the Left couldn’t wait to throw out the ‘angry white man’ narrative before the bodies of the victims were even cold. The problem is that it wasn’t a white guy who committed the crime. It was 21-year-old Ahmad Al Aliwi Alissa. A lot of people ate it hard, but we have the screenshots. This is the difference between the rest of us and liberals. We don’t peddle fake news and conspiracy theories to make us feel good or fan the flames of woke narratives.

The Biden White House is pushing gun control. Expect a full-court press on this, but we have to talk about CNN’s Don Lemon for a second. He appears to have gone on another one of his lectures where he, as Newsbusters’ Curtis Houck notes, shows that his network simply cannot stand anyone who doesn’t think as they do. The chyrons were out of control too.

Don Lemon is having a normal one, you guys. pic.twitter.com/rLsbtP8yut

I know I say it all the time, but I'll say it again -- with people like Don Lemon in such a prominent position, if you're on the right, CNN truly hates you. They hate what you think, how you vote, and how you live your lives. pic.twitter.com/VFpuUvFpvy

But Don Lemon is totally a journalist, you guys. pic.twitter.com/axJ1h5bQvF

This chyron on the right is supremely stupid. I mean, you can do this with anything that's tragic -- car accidents, divorce, domestic violence incidents, suicides. It's all a logical fallacy. pic.twitter.com/d5BDqiCYs7

As someone who's struggled with depression and suicide, it's offensive for Don to so callously say in this chyron that "every single one of us is just playing the odds at this point."

Before a break, Don brings up the National Suicide Prevention Line....absolutely insulting. pic.twitter.com/9djuxnIXRE

“Too many on the Right flaunt their devotion to the weapons taking American lives” read one of them.

For a while, we’ve known that the liberal media hates us. CNN is the worst offender. Law-abiding citizens don’t commit mass shootings. And yes, the AR-15 rifle and its variants are being targeted again by the anti-gun Left, though it’s owned by millions of Americans. It goes without saying that any loss of life is tragic, but when the case is made to erode civil rights in favor of safety, the road to tyranny is set in motion. I know many probably think we’re already on that road. This is a strawman lecture. Period. We’ve been through this before. The media will rattle off the same fake emotional lectures to help drum up the Democrats’ anti-gun push on the Hill. We know they hate us. We know they want to shred the Second Amendment. This has all been said and done before. I’d suggest ignoring CNN and whatever nonsense they toss out. Liberal America already got its face broken when they chucked the ‘he’s a white guy’ boomerang when this shooting was first reported. They lie. They have ulterior motives.

They can’t win, so they lash out and expose their true colors. Luckily, there are more of us than them in this country.

Be ashamed to exercise the constitutional right to bear arms. It’s nonsense. These clowns are the ones who get to decide which parts of the Bill of Rights are honorable. Go to hell.