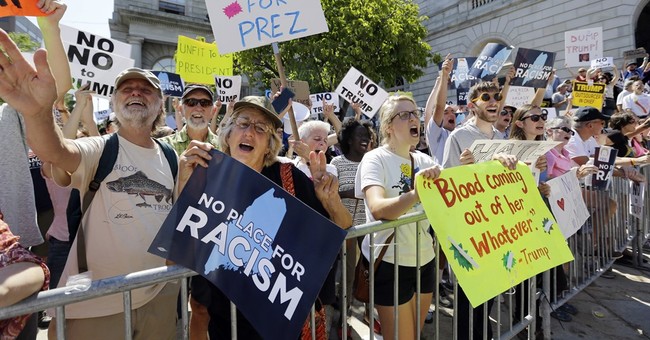 White liberals are the worst. We all know this. These are the college-educated folks who have declared themselves the political correctness police and protectors of communities of color. They see racism everywhere. They see oppression everywhere. They see problematic societal trends everywhere. Mr. Potato Head was diced up by this crew. Pepe Le Pew has been branded a rapist. If you think this is insane and not really helping normal Americans, you’d be right. Outside of the cities, no one cares about any of this stuff. White liberals are keen on another action item: defunding the police. It’s part of a change within the Democratic Party that could destroy it. It’s pushing more traditional voter blocs in its coalition away — and we see this now as the 2020 data is further analyzed. This warning is coming from liberal pollsters. The ideological rigidity that’s inherent with white liberals had a ripple effect with the Democrats’ liberal base — and it wasn’t good.

David Shor sat down with New York Magazine and offered some interesting observations, notably that this isn’t the path regarding drafting election strategies through a liberal versus conservative paradigm. It’s not a winning one; there aren’t enough liberals in the country. Second, despite voting for Democrats in droves and healthy margins, there are a lot of black and Hispanic voters who self-identify as conservative. Yet, there’s only one voter bloc where ideology and race have determined their voter preferences: white people. But Shor added that the white liberal surge within Democratic ranks led to nonwhites bolting from the Democratic base and made them vote more or less like white progressives and conservatives.

Shor took stock of the bleeding Democrats suffered from nonwhite voters in 2020.

“Our support among African Americans declined by something like one to 2 percent. And then Hispanic support dropped by 8 to 9 percent. The jury is still out on Asian Americans,” he said. “We’re waiting on data from California before we say anything. But there’s evidence that there was something like a 5 percent decline in Asian American support for Democrats, likely with a lot of variance among subgroups.” Why? Well, the defunding the police antics played a part for sure.

FiveThirtyEight’s Nate Silver commented that if Democrats lose these voter blocs, they’re screwed. Shor makes the same observation as well while noting that white liberals often have put a policy lens on certain voter groups, like Hispanics, on issues like immigration that aren’t supported by the data. Add that into the liberal media echo chamber, and you got a narrative spinning that simply isn’t true but taken as such, leading to flawed election strategies. Shor aptly noted that Hispanics aren’t left-wing on immigration at all. Support for giving illegal aliens a pathway to citizenship barely gets over the 50 percent mark. He also noted that white liberals view the “racial resentment” issue much more intensely than nonwhites. They’re more left-wing on the policy issues too, which doesn’t bode well for keeping this coalition intact.

This seems important. "Defund the police" may really have hurt Democrats' standing with nonwhite voters.https://t.co/kxmqvDXO3V pic.twitter.com/tdCAjq3STk

The broader implication in here is that Democrats should take it seriously when many nonwhite Dems identify themselves as moderate or conservative. And it's usually conservative on social/cultural issues more than on economics. If Dems lose those voters, they're kind of screwed.

Shor also touched upon what could be a very bloody civil war for Democrats regarding nonwhites and college-educated progressives. The latter group is taking over, they’re controlling more of the messaging and will donate in disproportionate numbers. On the political war chest end, I think we know whose calls will be returned first – and that could spell trouble. It’s a lengthy read, but full of nuance, some good and some bad for all groups (via NY Mag):

This lines up pretty well with trends we saw during the campaign. In the summer, following the emergence of “defund the police” as a nationally salient issue, support for Biden among Hispanic voters declined. So I think you can tell this microstory: We raised the salience of an ideologically charged issue that millions of nonwhite voters disagreed with us on. And then, as a result, these conservative Hispanic voters who’d been voting for us despite their ideological inclinations started voting more like conservative whites.

…as Democrats have traded non-college-educated voters for college-educated ones, white liberals’ share of voice and clout in the Democratic Party has gone up. And since white voters are sorting on ideology more than nonwhite voters, we’ve ended up in a situation where white liberals are more left wing than Black and Hispanic Democrats on pretty much every issue: taxes, health care, policing, and even on racial issues or various measures of “racial resentment.” So as white liberals increasingly define the party’s image and messaging, that’s going to turn off nonwhite conservative Democrats and push them against us.

…if you look at the concrete questions, white liberals are to the left of Hispanic Democrats, but also of Black Democrats, on defunding the police and those ideological questions about the source of racial inequity.

Regardless, even if a majority of nonwhite people agreed with liberals on all of these issues, the fundamental problem is that Democrats have been relying on the support of roughly 90 percent of Black voters and 70 percent of Hispanic voters. So if Democrats elevate issues or theories that a large minority of nonwhite voters reject, it’s going to be hard to keep those margins. Because these issues are strongly correlated with ideology. And Black conservatives and Hispanic conservatives don’t actually buy into a lot of these intellectual theories of racism. They often have a very different conception of how to help the Black or Hispanic community than liberals do. And I don’t think we can buy our way out of this trade-off. Most voters are not liberals. If we polarize the electorate on ideology — or if nationally prominent Democrats raise the salience of issues that polarize the electorate on ideology — we’re going to lose a lot of votes.

So, the point is that nuance isn’t dead. Elections are complicated. There are many ways to win one, and most importantly of all — nothing is permanent. All glory is fleeting, and if Democrats are hinging on a permanent liberal majority through these action items pushed and elevated by college-educated liberals, they could be in for a nasty shock.

Recommended
Clarence Thomas Tells the Media When He'll Leave the Supreme Court
Katie Pavlich
Share this on Facebook
Tweet
As Jay Chen Fundraises Off of Racism Towards Rep. Steel, Protesters Let Him Know They Expect Apology
Rebecca Downs
BUSTED: Counselor Who Organized School Drag Show Arrested for Having Sex with 15-Year-Old Student
Matt Vespa
Elise Stefanik Not Backing Down After Smear from Democrats, Mainstream Media Blame Her for Buffalo Shooting
Rebecca Downs
The FBI Sure Did Respond Differently to a Hate Crime Incident Earlier This Year