Why Bowe Bergdahl Wants to Appeal His Desertion Conviction Now 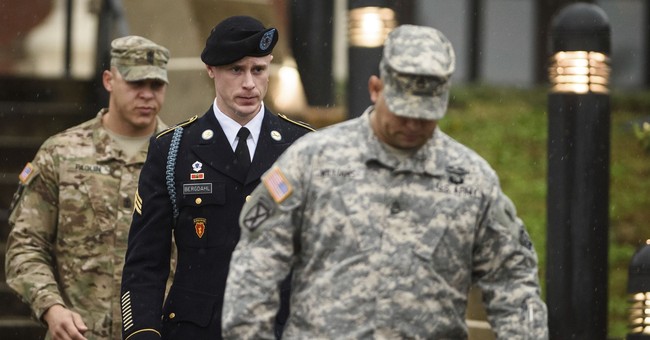 Well, he’s back, folks. Bowe Bergdahl wants to appeal his desertion conviction because—you guessed it—Donald Trump is no longer president. Bergdahl claims the former president’s rhetoric prevented him from having a fair trial. The case stems back when Bergdahl abandoned his post in Afghanistan 12 years ago, which led to his capture by the Taliban. They held him for five years. Katie covered this fiasco of a story, noting that six US servicemen were killed trying to look for him. He was released in 2014 in a prisoner exchange, where we got this deserter for the price of releasing five high-ranking Taliban terrorists (via Stars and Stripes):

A former U.S. Army soldier who was court martialed after he left his post in Afghanistan and was captured by the Taliban is asking a federal judge to overturn his military conviction, saying his trial was unduly influenced when former President Donald Trump repeatedly made disparaging comments about him and called for his execution.

"The scandalous meddling in a specific case by leaders of the political branches — one of whom was Commander in Chief of the armed forces — would never be tolerated if the proceeding had been a criminal prosecution in this or any other federal district court and should not be tolerated in a court-martial," Bergdahl's attorneys wrote in the court filing.

Bergdahl was charged with desertion and misbehavior before the enemy after the then-23-year-old from Hailey, Idaho, left his post in Afghanistan in 2009. The soldier maintained he was trying to get outside his post so he could report what he saw as poor leadership within his unit, but he was abducted by the Taliban and held captive for nearly five years.

In 2017, he finally entered a guilty plea for desertion. He was fined $10,000, got a reduction in rank (he was a sergeant), and was dishonorably discharged. He received no jail time. Then-President Trump labeled him a “traitor” upon his guilty plea.

Guy also covered the Bergdahl story and this exchange—“the Taliban Five”—and it’s classic Obama when it comes to confronting radical Islamic terrorism.  It was a total disaster.

Even CNN reported that there was intercepted radio chatter about Mr. Bergdahl wanting to join the Taliban. The Government Accountability Office said the exchange itself was illegal since Congress was not notified. The intelligence community was not on board with this move either.

This saga is just a reminder of the stench that emanates from Obama’s foreign policy. Be smart and reject this appeal.