It's Official: Bowe Bergdahl Enters a Guilty Plea For Desertion 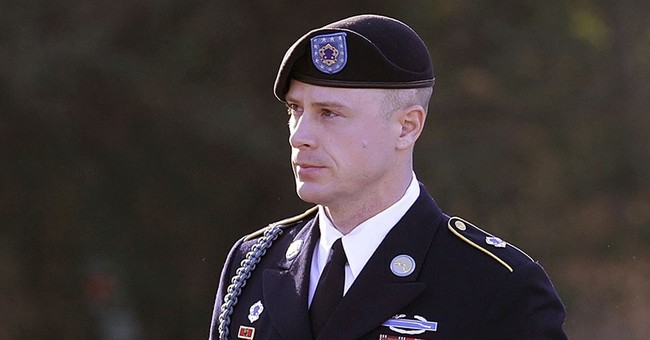 Army Sgt. Bowe Bergdahl  has officially pleaded guilty to desertion and bad behavior charges after walking away from his Afghanistan base in 2009. He was captured by the Taliban and held for five years.

Bergdahl walked into a military court room in his dress blues early Monday morning at Ft. Bragg to enter the plea, whining along the way President Trump made it impossible for him to receive a fair trial. He will be sentenced by a judge next week and faces up to life in prison for his misbehavior charges.

A reminder of some of his actions.

At one point during his captivity, Bergdahl converted to Islam, fraternized openly with his captors and declared himself a "mujahid," or warrior for Islam, Fox News reported in 2014, citing secret documents prepared on the basis of a purported eyewitness account.

The reports indicate that Bergdahl's relations with his Haqqani captors morphed over time, from periods of hostility, where he was treated very much like a hostage, to periods where, as one source told Fox News, "he became much more of an accepted fellow" than is popularly understood. He even reportedly was allowed to carry a gun at times.

Six U.S. service members were killed in Afghanistan while looking for Bergdahl. When he returned home in 2014, President Obama and National Security Advisor Susan Rice repeatedly said he served with "honor and distinction." They held a Rose Garden ceremony for his parents to celebrate his arrival back in the U.S.

His release didn't come without an additional price to the U.S. Five Taliban commanders, held at Guantanamo Bay, were released to Qatar in exchange for Bergdahl. They were previously determined to be far too dangerous to be set free.