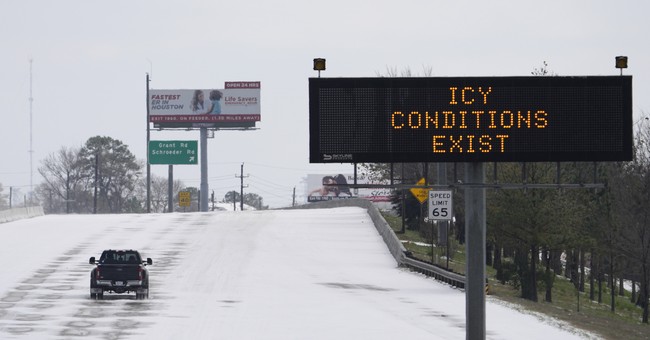 If you ever watched South Park, ‘blame Canada’ was quite the tune. Well, as Texas has plunged into a deep freeze due to widespread power outages after a historic and brutal winter storm, maybe we should look to Canada regarding how they keep their power grids running amid frigid conditions. It’s not what you think. It actually proves our point about energy production, which is why the liberal media and the environmental Left probably don’t want you to read this thread about Alberta, Canada.

How are they able to keep the lights on? It’s simple coal and gas. The two sectors the Left wants to ax from our production capacity. I’ve seen all the so-called fact checks. Wind power isn’t why Texas lost power. Renewable energy isn’t the reason, except that it is. Sorry, the facts are the facts. This push for heavily subsidized wind energy that’s wholly unreliable is what caused the blackouts. The turbines did freeze up. and the wind was responsible for over 40 percent of Texas’ energy. In short, the California model is a good foundational policy to give your residents unreliable energy. The Wall Street Journal torched this green energy push, aptly noting that this policy has put more people in danger than so-called global climate change.

“Wind’s share has tripled to about 25% since 2010 and accounted for 42% of power last week before the freeze set in. About half of Texans rely on electric pumps for heating, which liberals want to mandate everywhere,” they wrote. “But the pumps use a lot of power in frigid weather. So while wind turbines were freezing, demand for power was surging.”

A tale of two places: TX vs. Alberta, Canada.

In TX, a spike in demand during cold temps led to devastating blackouts.

In AB, a spike in demand during *far colder temps* led to... very little disruption.

Alberta, like TX, experienced demand that spiked to record highs.

Why did AB handle it with relative ease, while TX plunged into frozen darkness?

Did Alberta succeed because it's connected to a national grid that bailed it out?

Nope: "Both [Texas and Alberta] have limited electrical connections to their neighbours, leaving it largely up to themselves to manage their reliability."https://t.co/AEpYagYuOq

Alberta proves with 100% certainty that coal and gas plants can easily run in far more adverse conditions than TX had. That's why the anti-fossil fuel media do not want you to know the story of Alberta. Let's spread this story far and wide.

Let's also spread the story of how pro-wind policies made Texas unable to handle what Alberta handled easily.https://t.co/Fe5VIgFBL9

Alex Epstein had a good thread about how Alberta keeps the power running, noting that its grid is run on 43 percent coal and 49 percent gas.

Alberta also endured a record-high energy demand. The province managed because they invested in fossil fuels and not wind, which Epstein noted is “unreliable.” And both Texas and Alberta work on isolated grids. This is a very fixable issue.

“Alberta proves with 100% certainty that coal and gas plants can easily run in far more adverse conditions than Texas had. That's why the anti-fossil fuel media do not want you to know the story of Alberta,” he added.

Nothing will beat fossil fuels in terms of efficiency and reliability. It works. What doesn’t work are these so-called alternatives that conk out when some snow hits.