Former Editor: Cuomo Didn't Like a Story We Were Running, So His Enforcers Terrorized Me 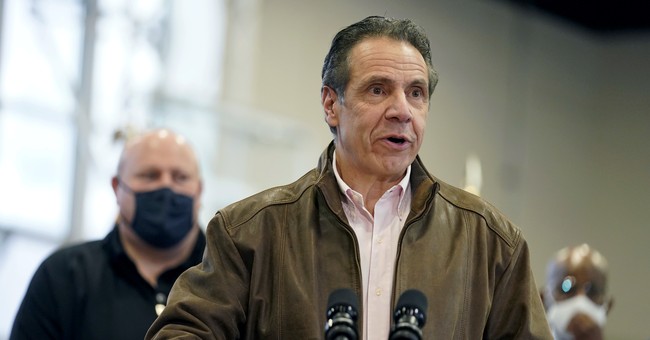 Eggs, tomatoes, apples, maybe even bricks should be thrown at the governor’s office in New York. The façade is over. The mask has slipped. Andrew Cuomo is being exposed for everything the media accused Trump of being, the only exception is that King Andy is worse. Cuomo is everything the media said about the former president regarding the press, the bullying, etc. In reality, it’s this New York liberal who embodied all of these horrible qualities to the nth degree. His lackeys on his staff were no different. They think they’re better and smarter than everyone else, and that the rules don’t apply. That’s typical Democratic behavior. If that’s the ethos, no wonder why they thought they could lie about the real COVID death toll and think no one would care.

Yes, things are falling apart at the governor’s office. The only life preserver he has left is the liberal media. State Democrats want investigations, maybe impeachment — but don’t bet the mortgage that any real accountability will happen. Then again, maybe they could shock us. For now, Cuomo is banking on him being a Democrat saving him. He recently went after State Assemblyman Ron Kim, who kept all the receipts of the harassment. State Sen. Alessandra Biaggi has been at the receiving end of Cuomo’s temper as well. And this isn’t the first time. Morgan Pehme, the former editor of City & State, remembers a 5 am phone call from Cuomo’s people back in 2014 because they didn’t like a story they were doing about a corruption report. Like Kim and Biaggi, he recounts a campaign of terror waged against him because Andy is a delicate snowflake (via NY Post):

Many Americans are shocked, having bought into the compassionate persona Cuomo conveyed in his pandemic briefings. But Kim’s revelations came as no surprise to anyone who has dealt with the governor. As one Albany insider texted me last week, “everyone has an Andrew Cuomo story.”

While the April 2014 call I received from DeRosa didn’t come directly from the governor, I knew it bore the full weight of his power. City & State, the New York politics magazine I edited at the time, was about to publish a story exposing Cuomo’s machinations to distort the final report issued by the Moreland Commission on Public Corruption.

The manipulation we documented put the lie to the governor’s public proclamation that it would be a fully independent body with the authority to probe graft in Albany wherever it found it. In reality, as soon as the commission touched the governor’s own office, he hastily shut it down.

I started getting pushback from the governor’s office as soon as we called requesting comment. In a barrage of calls, his media handlers pushed me to spike the article, alternately approaching me with carrot (a hot exclusive to be named later) and stick. By 4:30 a.m. — our piece was scheduled to publish at 5 — I was only getting the stick.

Seven years later, I don’t recall precisely everything DeRosa hurled at me, though I’m positive she vowed to “destroy” my career and take revenge on my publication. I remember vividly how I felt: scared.

Cuomo doesn’t dispute that talking tough is what he does. He thinks it’s a virtue. But the abuse he privately metes out amounts to a systematic campaign to chill negative coverage of his administration. And it works.

DeRosa. That name sounds familiar because that’s the top aide who admitted to state lawmakers this month that the Cuomo administration hid the true COVID death toll in nursing homes which has set off this whole scandal. She apologized, not to the families they were directly responsible for killing, but for the…political inconvenience this may have caused state Democrats. Andrew Cuomo signed an executive order forcing nursing homes to accept COVID-positive patients. They packed these people in like sardines in facilities housed with people who are most susceptible to infection and death from this virus. What do you think happened? This admission from Cuomo’s office comes after the state attorney general reported that COVID nursing home deaths were undercounted by as much as 50 percent. Cuomo’s people claim they did this because they feared a federal investigation under the Trump administration, which is pathetic. That’s why you hid the numbers, which ironically should open a federal probe into whether the state of New York lied to federal authorities. Cuomo now says visitors brought COVID in, not the patients that were infected with the virus. Governor, visitors were not allowed in, so try again. Then, Andy apologized for looking as if he was incompetent in this matter.

Andrew Cuomo and his people are liars, bullies, and some of them may be legitimate psychopaths. They got caught. They should burn in the legal fires. They lied and people died. And the state should move on from King Andy and his minstrels of death whose incompetence caused unnecessary COVID deaths.