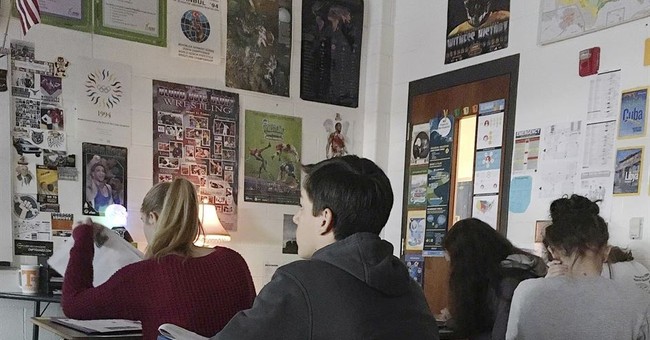 Oh, c’mon, guys. A statement apologizing for abysmal behavior isn’t going to cut it. This week an Oakley School Board video call had scores of board members trashing and mocking parents who want their kids back in school. Oakley is in the San Francisco Bay Area. It was a total and complete fiasco for these board members. They got caught red-handed with their behavior. It exposed what really goes on and what is said during these hearings. All the dirty laundry was aired before members realized their call was being broadcast to the public.

You can hear one member saying “uh oh” when their comedy routine was outed. To make matters worse, some of the conversations centered on limiting responses and comments from parents. In fact, Superintendent Greg Hetrick was the one who brought that up. The best was the statement:

"Last night at the Oakley Union Elementary School District Regular Board Meeting there were unfortunate and truly inappropriate comments made that were heard by many. These comments are not typical and more importantly they are not what the community should expect from our school district."

He added, "The comments made were not in alignment with our Vision and are definitely not what any of us stand for as leaders. I know that we lost trust with the community. I will not make excuses for what happened or why it happened. I am the superintendent. I am responsible and accountable and I am truly sorry for what took place ... I know that our students deserve better from us."

Yes, the school board president quickly resigned, but this is unsurvivable. Who the hell made these people kings and queens? Cases of children experiencing anxiety and depression have spiked. And yes, tragically they’re starting to commit suicide. It’s why Clark County, Nevada, is sprinting to re-open schools as quickly as possible. San Francisco has even started proceedings to sue its own school board to get their schools reopened. It had to get so bad that kids had to die until these clowns in the media and education decided that this prolonged shuttering of our schools was an issue. The science has been clear for months. It’s safe to reopen. Teachers in some parts of the country, like Fairfax County, Virginia, cut the vaccination line—and still refuse to work. Some teachers are just lazy. We’re seeing that more and more every week.

1) When officials at the Oakley Union Elem. School district thought they were meeting privately, they used profanity to insult & threaten parents upset by the district's prolonged school closures.

Here's when they realized their mtg was being broadcast to the public.

2) Before she realized the public was listening in, School Board President Lisa Brizendine criticized parents who continue to be frustrated by the district's Covid-related school closures:

"They want to pick on us because they want their babysitters back."@nbcbayarea pic.twitter.com/Z0jaRQWKn9

3) School Board Trustee Richie Masadas then appeared to link parents' frustration over close closures to drug use.

"My brother had a delivery service for medical marijuana and his clientele were parents of kids at school."@nbcbayarea pic.twitter.com/vgAhY90lmG

4) What school board officials thought was a private chat, also included Superintendent Greg Hetrick trying to sell the board on new technology that aims to limit public comment by cutting off parents "mid-sentence."

"It just cuts them off mid-sentence and it's done," he said. pic.twitter.com/6hK3huf3Hb

5) Notice how quickly the video feed shuts off after school officials realize their profanity & insults were broadcast to the very same parents they were disparaging.

Makes you wonder if the board still plans to adopt that "new technology" to limit public comment.@nbcbayarea pic.twitter.com/szqd3TpWUb

To their credit, the Oakley School Board did something right in the wake of this public relations nightmare. They all resigned (via Fox News):

The president and three other members of a Northern California school board resigned Friday after reports that they made mocking comments about parents during a public video meeting about reopening schools.

The resignation of President Lisa Brizendine of the Oakley Union Elementary School District was confirmed to Fox News by Schools Superintendent Greg Hetrick.

The other members -- Kim Beede, Erica Ippolito and Richie Masadas -- who constitute the rest of the board, resigned later Friday, FOX 2 of the Bay Area reported.

The recorded meeting from Wednesday night was posted on social media and shows board members who appeared to believe the meeting was private. Brizendine appeared to mock parents who "want their babysitters back."

The president of the Contra Costa County Board of Education will likely appoint interim board members until new ones are elected or appointed, FOX 2 reported.

These lazy school board members complaining about parents being…lazy. That’s just rich. And these people are the ones who complain about pay and benefits. Get off my lawn with your whining now.