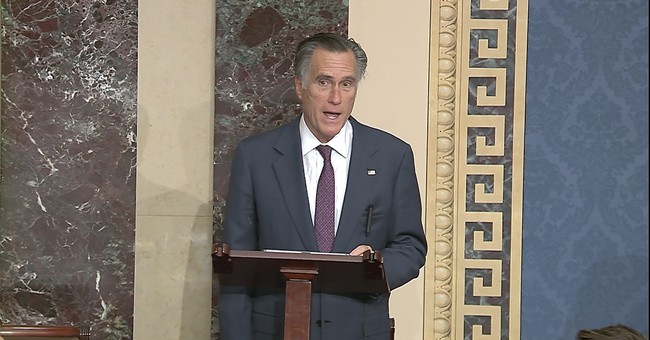 Sen. Mitt Romney (R-UT) continues his streak of sucking by criticizing former President Trump’s pardons. If he criticized the content of the pardons—that’s fine. Hey, I’m upset that Joe Exotic didn’t get a pardon, though I am glad Lil’ Wayne got an eleventh-hour pardon. Anyone arrested on gun charges when those firearms are gold-plated handguns deserves an automatic pardon in my book. Yet, Romney decided to offer some lecture that no one wants to hear right now: the pardons were never meant to be used for “cronies.” This is amazingly stupid. Mitt—have you opened a history book (via The Hill):

Sen. Mitt Romney (R-Utah) on Wednesday called for reforming the use of the president’s pardon power after former President Trump granted clemency to 143 individuals as his final act of office, including Stephen Bannon, his former strategist, who was charged with defrauding donors.

"I can't imagine the founders in providing for pardon power for a president anticipated that presidents would use it to reward political friends, and as a result I would hope that we could develop a tradition of more narrowly providing pardons," Romney said.

Romney said there should be a tradition of “not providing them to people who are cronies or political individuals.”

Romney said he “would love to see a constitutional remedy” even though he acknowledged “it’s unlikely that something like that can get passed just given the difficult process of passing a constitutional amendment.”

Oh, Mitt, even liberal lawyers know this is a garbage take. First, it doesn’t matter if it’s right or wrong. Often times, in the gutter of politics, ‘it is what it is’ is the mindset. That’s okay. Second, this is just not historically accurate. Presidents has long pardoned their friends or have done so for purely political reasons. Jonathan Turley, a law professor at George Washington, noted this when he eviscerated CNN’s Jeffrey Toobin’s take on Roger Stone’s commutation. This was pre-Zoom call. Basically, Toobin was trying to say that such an act had never ever happened before until Trump was elected. Not true. As Turley noted, let’s start with Thomas Jefferson’s pardons and work on from there [emphasis mine]:

Thomas Jefferson pardoned Erick Bollman for violations of the Alien and Sedition Act in the hope that he would testify against rival Aaron Burr for treason. Andrew Jackson stopped the execution of George Wilson in favor of a prison sentence, despite the long record Wilson had as a train robber, after powerful friends intervened with Jackson. Wilson surprised everyone by opting to be hanged anyway. However, Wilson could not hold a candle to Ignazio Lupo, one of the most lethal mob hitmen who was needed back in New York during a mafia war. With the bootlegging business hanging in the balance, Warren Harding, who along with his attorney general, Harry Daugherty, was repeatedly accused of selling pardons, decided to pardon Lupo on the condition that he be a “law abiding” free citizen.

Franklin Roosevelt also pardoned political allies, including Conrad Mann, who was a close associate of Kansas City political boss Tom Pendergast. Pendergast made a fortune off illegal alcohol, gambling, and graft, and helped send Harry Truman into office. Truman also misused this power, including pardoning the extremely corrupt George Caldwell, who was a state official who skimmed massive amounts of money off government projects, like a building fund for Louisiana State University.

Richard Nixon was both giver and receiver of controversial pardons. He pardoned Jimmy Hoffa after the Teamsters Union leader had pledged to support his reelection bid. Nixon himself was later pardoned by Gerald Ford, an act many of us view as a mistake. To his credit, Ronald Reagan declined to pardon the Iran Contra affair figures, but his vice president, George Bush, did so after becoming president. Despite his own alleged involvement in that scandal, Bush still pardoned those other Iran Contra figures, such as Defense Secretary Caspar Weinberger.

Bill Clinton committed some of the worst abuses of this power, including pardons for his brother Roger Clinton and his friend and business partner Susan McDougal. He also pardoned the fugitive financier Marc Rich, who evaded justice by fleeing abroad. Entirely unrepentant, Rich was a major Democratic donor, and Clinton had wiped away his convictions for fraud, tax evasion, racketeering, and illegal dealings with Iran.

So, sorry, Mitt—you’re wrong. The Founder did pardon folks based on political reasons. Cronies were also pardoned. No one cares if it’s right or wrong. It’s what it is. You don’t like it, I know—but even you admit it’s not changing anytime soon if ever, so just get used to it and drop the choir boy act. We all know you can’t fight. You’re too weak.

Recommended
If Republicans Win in November, It Will Be in Spite of Themselves
Derek Hunter
Trending Townhall Video
Share this on Facebook
Tweet
The Narrative Is Changing Again on Gas Prices
Rebecca Downs
Sen. Josh Hawley Wants to Know Why Pro-Lifers Are Held to an Unequal Standard by Biden's DOJ
Rebecca Downs
Karine Jean-Pierre Seems to Have Missed the Narrative About Joe Biden Running Again
Rebecca Downs
There’s Been Another Surprising Poll Out of Washington
Rebecca Downs
Even Some Liberal Outlets, Polls Coming Around on Admitting Republicans Still Have a Midterm Edge