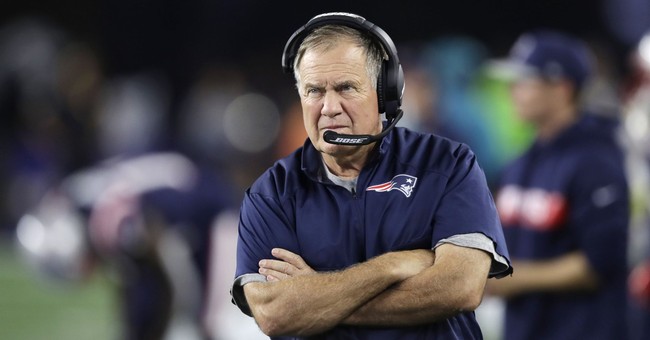 Look, I personally have nothing against the New England Patriots. The fan base is trash, but they got kicked in the teeth this year with a 7-9 record, missing the playoffs, and once again looking for someone to take over at the quarterback position. Cam Newton is not it. It’s a franchise that was the perennial playoff contender for more than ten years. From 2002 until 2020, they made the playoffs. They won Super Bowls as well. Six to be exact, though they were stopped twice by Eli Manning and the New York Giants. As a die-hard Giants fan, I take special satisfaction in the fact that Eli is a Brady killer, slaying that juggernaut of a team twice. Yet, Bill Belichick was also with the New York Giants for over a decade, working his way up the chain to become the defensive coordinator and drafting a plan that stopped the Buffalo Bills in Super Bowl XXV. It's a scheme that rightfully earned its enshrinement in the Hall of Fame.

So, when Bill was picked to be awarded the Presidential Medal of Freedom, it’s a worthy honor. The man is one of the greatest to ever coach the game. The problem is that there was a riot on Capitol Hill last week. Pro-Trump supporters stormed into the US Capitol. Five people were killed. It’s probably not the best look or time to be awarded this honor, even though Patriots’ owner Bob Kraft is a Trump supporter. Belichick is also friends with the president, but it’s just too hot to be around 1600 right now, so Bill called an audible. He’s turning it down (via Associated Press):

Patriots’ HC Bill Belichick will not be traveling to Washington nor accepting the Presidential Medal of Freedom, he announced today. pic.twitter.com/uvLLigFlHU

New England Patriots coach Bill Belichick announced Monday night that he will not accept the Presidential Medal of Freedom, saying “remaining true to the people, team and country I love outweigh the benefits of any individual award.”

In a delicately worded, one-paragraph statement, the six-time Super Bowl-winning coach did not say explicitly that he had turned down the offer from President Donald Trump, whom he has called a friend. Instead, Belichick explained, “the decision has been made not to move forward with the award” in the wake of last week’s deadly siege on the U.S. Capitol.

Trump announced on Saturday, three days after the riots, that he would be awarding Belichick the nation’s highest civilian honor — part of a late flurry of presentations that also included golfers Annika Sorenstam, Gary Player and the late Babe Zaharias.

So, watch a lot of anti-Trumpers come out of the woodwork to praise Bill and the Patriots, even though a great many of them are left-wingers who don’t watch football, don’t know who this man is, or the organization that employs him.