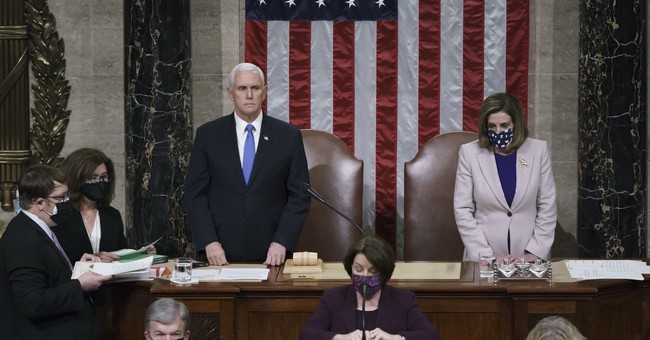 They’ve wanted to do this for quite some time but never had the evidence to do so. It all looked nakedly political in any other situation. Now, the enemies of President Trump have their ammunition to unload on him in the final days of his presidency. Congress certified the 2020 Electoral College results. It’s done. Joe Biden will be our next president, but the storming of the Capitol Building yesterday shocked the nation. Blame is being directed at President Trump, who addressed Trump supporters at the Save America rally prior to this incident.

You can condemn what happened yesterday for sure, but you cannot say you’re shocked. This boiling of anger was a long time coming. Was this the best way to make that known? No.

Yet, the liberal media is the last person to start lecturing us about peace, unity, and how this was disgraceful. These people condoned leftist violence during the summer of 2020. And if you think the Democrats’ rehashing of the 25th Amendment narrative is genuine; you’ve been asleep for the past four years. They and some folks at the Department of Justice have mulled invoking this to remove Trump. That’s a coup.

While Trump has only 13 days left in office, a chorus of Democrats, which now includes House Speaker Nancy Pelosi, has threatened to remove Trump one way or another. If the 25th amendment is not invoked, then another run at impeachment could start. Sen. Chuck Schumer (D-NY) was the first to fire the ‘remove Trump’ salvo today (via NBC News):

Pelosi said if Pence does not act, then the House would consider impeachment to remove him from office. Such a move would be largely symbolic, since there would be little time for a Senate trial before Trump’s term ends in 13 days.

“What happened at the U.S. Capitol yesterday was an insurrection against the United States, incited by the president," Schumer, D-N.Y., said in a statement Thursday morning. "This president should not hold office one day longer."

“The quickest and most effective way — it can be done today — to remove this president from office would be for the vice president to immediately invoke the 25th Amendment,” Schumer said. “If the vice president and the Cabinet refuse to stand up, Congress should reconvene to impeach the president."

I mean, let’s not act like this anger towards Trump from Democrats occurred because of yesterday. They’ve wanted to get rid of him for years—since day one. They tried to remove him by peddling a manufactured myth with Russia collusion and then they tried the Ukraine quid pro quo that never happened. This is nothing new.

It’ll be largely symbolic, as NBC News noted regarding impeachment which ironically partially feeds into why people stormed the building in the first place yesterday. But it will make liberals feel a sense of moral superiority, despite fanning the flames of unrest last year. And it will certainly give an out to Republicans who are quietly waiting for this administration to end.