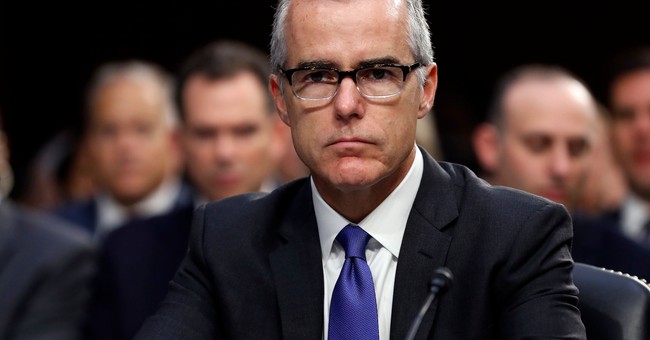 Even after he was fired from the Federal Bureau of Investigation, former acting Director Andrew McCabe can’t seem to get his story straight. McCabe has long been a center of controversy. From allegations that the FBI used the uncorroborated Trump dossier to secure a spy warrant against Trump campaign official Carter Page to a potential conflict of interest in his role in the Hillary Clinton probe, McCabe has become the poster child for all this is wrong at the Department of Justice for Republicans and the Trump White House. The stench that this man, along with former FBI lawyer Lisa Page and Agent Peter Strzok, thought they were above the law, self-appointed defenders against the Trump presidency.

The conflict of interest with McCabe and the Clinton probe stemmed from his wife’s, Jill, Virginia State Senate campaign in 2015; top Clinton ally and then-Gov. Terry McAuliffe dumped some serious money into that campaign. Jill lost. Strzok and Page had an extramarital affair that included tens of thousands of texts, where the two exchanged anti-Trump messages during some of the most sensitive investigation the bureau had overseen in years: The Clinton email probe, in which they worried if the bureau was going too hard on the former first lady, and the counterintelligence investigation into Russian collusion; an investigation that’s now headed by Special Counsel Robert Mueller.

When Mueller knew these texts, he removed Strzok from the investigation. Strzok went from top counterintelligence agent to working human resources before being fired for the anti-Trump texts that include cryptic messages to Page, speaking about an “insurance policy” for a Trump presidency to outright saying they would stop it somehow. The insurance policy text was mentioned during a meeting with then-Deputy FBI Director Andrew McCabe. Strzok tried to say that the texts show his patriotism, while Page, his mistress, said they meant exactly what they mean. Yeah, this whole affair reeked of deep state antics. And now, we have McCabe chirping about meetings within the DOJ that centered on invoking the 25thAmendment to boot Trump. Oh yes, people want to know more about this because this is just insane and possibly illegal. Judicial Watch already filed a lawsuit to force the DOJ to release all documents relating to using the 25thAmendment to execute what could only be described as a coup d’état.

McCabe was interviewed by 60 Minutes on Sunday, where he said vote counting was discussed by Deputy Attorney General Rod Rosenstein regarding invoking the 25thAmendment within the Trump cabinet (via CBS News) [emphasis mine]:

Scott Pelley: How did he bring up the idea of the 25th amendment to you?

Andrew McCabe: Honestly, I don't remember. He, it was just another kinda topic that he jumped to in the midst of a wide-ranging conversation.

Scott Pelley: Did you counsel him on that?

Scott Pelley: Rosenstein was actually openly talking about whether there was a majority of the cabinet who would vote to remove the president.

Scott Pelley: Did he assign specific votes to specific people?

Andrew McCabe: No, not that I recall.

Scott Pelley: As you're sitting in this meeting in the Justice Department, talking about removing the president of the United States, you were thinking what?

Andrew McCabe: How did I get here? Confronting these confounding legal issues of such immense importance, not just to the FBI but to the entire country, it was— it was disorienting.

Three days later, McCabe has changed this part of the story:

McCabe on 60 Minutes: Rosenstein was "counting votes or possible votes" on using the 25th Amendment.

McCabe today on if Rosenstein was counting votes: "Not that I'm aware of." pic.twitter.com/miCBfTmuDI

PELLEY: "Rosenstein was actually openly talking about whether there was a majority of the cabinet who would vote to remove the president?”
McCABE: "That’s correct. Counting votes or possible votes.”@colbyhall

So, we probably should prepare for another round of DOJ-bashing, which they’ve earned. On the Left, the DOJ/FBI has lost credibility ever since also-fired FBI Director James Comey informed Congress days before Election Day that they had fund new Clinton-related emails and that the bureau would be reviewing them. Democrats think this is what cost Clinton the election. It didn’t, but the sour feelings remain even with two-time presidential loser, Hillary Clinton. On the Right, the FBI’s refusal to prosecute Clinton over mishandling classified and sensitive information that was passed through her unsecured and unauthorized in-house email server while she was secretary of state. And now, coup talks because Trump won the election? It’s time to clean house. And no, the coup aspect isn’t overblown; even liberal Alan Dershowitz said you couldn’t spin what top DOJ officials tried to do here (via RCP):

"If [McCabe’s comments are] true, it is clearly an attempt at a coup d’état," Dershowitz said.

"Any Justice Department official who even mentioned the 25th amendment in the context of President Trump has committed a grievous offense against the Constitution…The framers had in mind something very specific, and trying to use the 25th amendment to circumvent impeachment provisions or to circumvent an election is a despicable act of unconstitutional power-grabbing."

Not even Lyin’ McCabe can spin this.

Share this on Facebook
Tweet
NYC Health Department Is Urging Residents to Put Their Masks Back On...But It's Not Just Because of Covid
Leah Barkoukis
Ex-Head of Biden Thought Police: Attacking Me Is a National Security Threat
Matt Vespa
Mandatory Vasectomies? Why One Oklahoma Democrat Is Talking About It.
Leah Barkoukis