How Some Parts of Canada Enforce Its COVID Ordinances...It's Not Pretty And It Could Get Worse 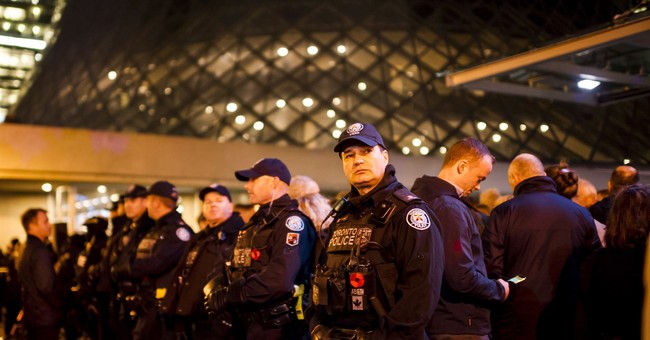 In Quebec, having six people in your home is illegal, apparently. There’s a viral video of a small New Year’s Eve party being broken up by police. There were only six people, but some neighbor ratted them out to the police, who raided the home. You can see police grabbing people to get them out of the house. The local police say that those in the home attacked police. The homeowner said he intervened after he alleged a police officer grabbed his mother’s arm. The police say the video doesn't tell the whole story. You decide (via The Blaze):

NEW - Canadian police stormed an "illegal gathering of six people" in a Gatineau home after a neighbor ratted them out. The residents resisted.pic.twitter.com/Bl5tJmMOIN

Some residents in Gatineau held a private New Year's Eve party. Neighbors snitched on the partygoers, and police arrived at the home around 11:30 p.m., according to CTV News. There were six adults inside the home preparing to ring in the new year.

"At some point, they had no judgment at all. You can't treat people like this," Mathieu Tessier, who appears in the video, told CTV News. "The truth is...they aggressed us."

Tessier claims that he got involved in the altercation after a police officer allegedly pulled his mother's arm.

"The video shows only an excerpt from the intervention," the Gatineau police tweeted in French. "The individuals were recalcitrant and refused to cooperate. The individual arrested in the video had assaulted a police officer, hitting him in the face a few times."

A Gatineau police spokesperson told CTV News that the individual seen in the video was charged with assault and obstructing an officer. The owner of the home was arrested and charged with refusing to provide personal information.

The Blaze added that all six were slapped with $1,546 fines for violating the COVID protocols. And it could get worse as Quebec mulls a total lockdown that will begin on Saturday. The final decision will be rendered on Wednesday (via Montreal Gazette):

As health experts warn that the pandemic is out of control in Quebec and hospitalizations for COVID-19 continue to mount, Premier François Legault on Wednesday will announce a province-wide lockdown that will include curfews, La Presse reported on Tuesday.

Quoting sources within the government, the report says the lockdown will go into effect on Saturday, last three to four weeks and extend to schools, offices, construction work and all other activities and commercial operations except for those deemed essential such as food stores and pharmacies.

The irony is that household spread is what’s killing us. Keeping us inside is killing us. Now, Canadian winters are brutal, so I get why people aren’t outside. As it gets colder here, I’m sure the urge to head outside will also diminish. Still, bars, restaurants, gyms, hair salons, and barbershops are low-risk areas that really don’t contribute to new COVID cases. Schools especially are not sources of spread. Regarding grocery stores, if the government wants to limit areas where people go, shouldn’t grocery stores also be shuttered along with the bars if we’re going by logical standards? Nothing makes sense. That’s why people are done with the COVID panic show the media and the politicians have produced for the past year. Nothing makes sense. They’re tired of it. The rush to shut everything down before we knew anything killed the credibility of the expert class. Regarding the house raid, that may have been centered on an area where the spread is most likely given the data, but the ripping of persons from private homes only further kills the lockdown's credibility. If anything, the police should have issued fines and told those inside they had to quarantine for 10 days. That may have been viewed as equally ridiculous, but it’s a much less fascistic route than what we see on the video. I don’t know. Right or wrong, it’s a freak show out there.

Now, if these people did assault cops, well—you know how things go.