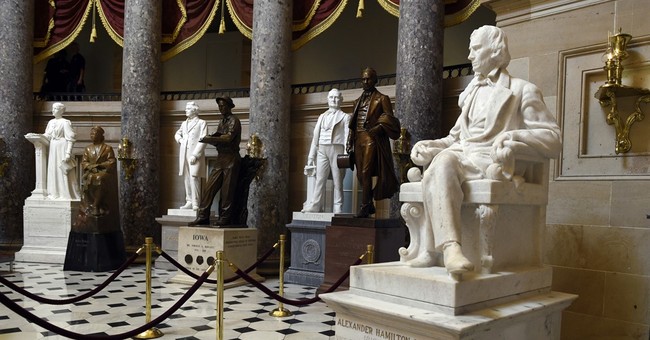 Robert E. Lee’s statue was removed from the U.S. Capitol very early Monday morning. Virginia’s blackface-wearing governor, Ralph Northam, celebrated with a Michael Jackson moonwalk over the news. A sculpture of civil rights activist Barbara Rose Johns will replace the spot left vacant by Robert E. Lee, who despite the side he chose during the American Civil War, was one of the greatest generals this nation ever produced (via The Hill):

A statue of Confederate Gen. Robert E. Lee was removed from the U.S. Capitol overnight.

The statue has stood with America's first president, George Washington, as the state of Virginia's contribution to the National Statuary Hall Collection at the Capitol for more than 100 years.

A representative from Northam's office was present for the removal along with Sen.Tim Kaine(D-Va.) and Rep. Jennifer Wexton (D), who represents a large swath of Northern Virginia in Congress.

This is an important step forward—it is past time we tell our story with images of perseverance, diversity, and inclusion. pic.twitter.com/zyR99ukiIz

According to VA Gov's office,VA General Assembly must approve the replacement statue before a sculptor can be commissioned. Gov. Northam proposed $500,000 to replace it.If approved, the Barbara Rose Johns statue would be the only teenager represented in the US Capitol collection.

3) Each state gets two statues in the Capitol. It is up to the states to decide which statues it sends to the Capitol.

The House passed a measure over the summer to remove the statues of all 12 Confederate statues in the Capitol. But ths Senate never acted

So, what’s next? Robert E. Lee is problematic because his Army of Northern Virginia fought against the Union, among other things. Did we forget about how he was possibly a deciding factor in convincing scores of soon-to-be-ex-CSA troops that may be taking this fight guerilla-style and never surrendering was a futile and destructive move? Yes, he did. He knew the war was over. It was time for reconciliation. It was time to move on and rebuild. What a horrible, horrible sentiment to convey at the end of our bloodiest war. Are we going to rename Washington and Lee in Virginia? Are we going to get rid of George Washington and Thomas Jefferson in the U.S. Capitol as well? If you purge Lee for being problematic, Jefferson and Washington have to go too. The Left cannot twist themselves out of the impossible standard they have peddled regarding historical figures.

If someone wants that done, they have to accept it. The standard is meant to be impossible because erasing American history is what the Left wants to do. Erasing these figures means they never existed or better yet, what they did never happened. Not true. This effort to make the study of history less offensive or something is laughable. If that is what the Left wants, then history can’t be taught. Hell, they’re halfway there on that front as well with the ignominious re-writes we’re seeing in some of these textbooks, especially regarding the American Civil War. This interesting and tragic period is loaded with nuance—and none of that is present. You cannot look at this conflict through a good vs. evil lens. To demonstrate how off the rails this has become, we have a San Francisco Bay Area high school names after Lincoln pushing to rename itself because…Abraham Lincoln didn’t care enough about black people.

History is violent. For any event that’s a benchmark in the progression of human civilization, there are scores of moments filled with death and destruction. It’s simply who we are as a species. Since the Sumerians, we have sought to destroy, dominate, or subjugate one another. It remains that way today. If that’s too disturbing for some, then history and its related fields of study cannot be your focus in education. You learn from history to avoid repeating it. Removing a statue of a man who the ‘woke’ Left finds problematic isn’t progressive, it’s Stalin-esque. It’s Mao’s Cultural Revolution. It’s illiberal and anti-American, which are two words that perfectly capture today’s Democratic Party.

You cannot tell the story of the state of Virginia without Robert E. Lee, George Washington, or Thomas Jefferson, and now these men are being subjected to erasure because of the times they lived in, which is the most disturbing aspect in this historical revisionist freakshow we’re being subjected to right now.