Joe Biden Knows Why Democrats Suffered Down Ticket...And It's Not a Hard Guess 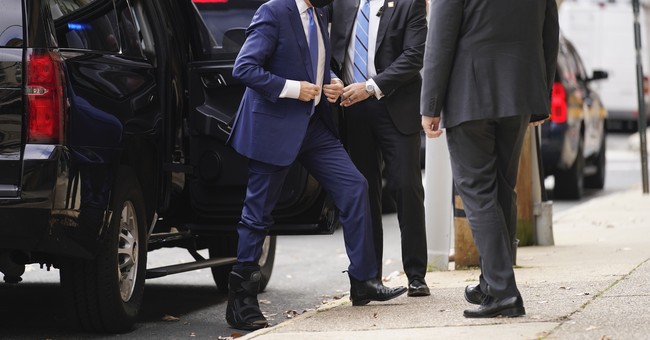 This is no secret that 'defund the police' is unpopular. It’s stupid. It’s peddled by the most liberal and detached of society. It was birthed from the area that needs policing the most: urban America. The professional elites, the lion’s share of them overeducated white liberals who are trying to take over the Black Lives Matters movement (which in itself is problematic, I’ve been told), peddled this trash idea. No one likes it; even black Americans don’t want it. It’s led to nothing but mayhem as America’s cities burned throughout the summer, exacerbated by anti-cop Democrats in these areas across the country. They also spit in the faces of police when they proposed deep budget cuts and cut overtime pay. It’s atrocious. It just shows how destructive Democrats will become to maintain their stranglehold on their minority voter blocs. Well, not everyone is an idiot, though there are plenty of them in the Democratic Party.

In the debates, Joe Biden pretty much downplayed his support for defunding the police, along with single-payer health care and the Green New Deal, despite the latter being promoted on his website. The point is these were three things that the progressive left wants, which will also destroy the country. Donald Trump’s overly aggressive first debate performance allowed Biden’s dismissing the action items of the most active and vocal slice of his party’s base to be glossed over. Trump should have let Biden talk; he’s known for hanging himself if you give him time.

Yet, there were plenty of Americans who still got the message from the actions of BLM and other Democrats throughout the summer. In leaked audio, Biden was not shy expressing how 'defund the police' has poisoned the party, saying these antics “beat the living hell” out of Democrats in 2020. Leaked audio of a meeting Biden recently had where he said this was obtained by The Intercept (via The Hill):

“I also don’t think we should get too far ahead of ourselves on dealing with police reform in that, because they’ve already labeled us as being ‘defund the police’ anything we put forward in terms of the organizational structure to change policing — which I promise you, will occur. Promise you,” Biden said during a a two-hour virtual meeting with civil rights leaders on Tuesday, audio of which was obtained by The Intercept.

"Just think to yourself and give me advice whether we should do that before January 5th, because that's how they beat the living hell out of us across the country, saying that we're talking about defunding the police. We're not. We're talking about holding them accountable," Biden continued.

"You lost a big audience the minute you say it, which makes it a lot less likely that you're actually going to get the changes you want done," Obama said. "The key is deciding, do you want to actually get something done, or do you want to feel good among the people you already agree with?"

The House Democratic majority has been whittled down to a point where Nancy Pelosi cannot screw around. She has very little room to maneuver on vote counts, but a good chunk of the caucus still hails from states, the most liberal obviously, where defund the police is still a war cry. Rep. Alexandria Ocasio-Cortez (D-CA) and her squad are not going to back down from this—and they’ve defined themselves as being the nutbar factor six element of this debate. It may be weird for these socialists, but law and order is a universally accepted norm not just with Americans, but normal people.