Hanoi Jane Stands Upon 200,000 Dead People to Declare Why COVID Is 'God's Gift to the Left' 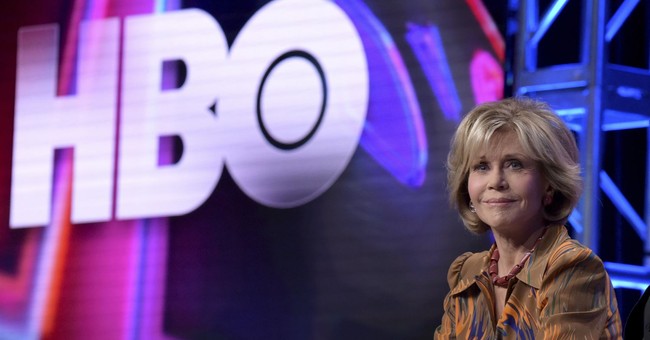 Jane Fonda is a sick puppy. Is COVID bad or good? She gives a rather odd answer. No, that’s not the right word. She gives a ghoulish answer, noting that she feels the virus has been “God’s gift to the Left” because it’s exposed Trump for who he is or something. Yeah, forget the 200,000+ people who died. Forget about how half of that total is due to Democratic governors forcing nursing homes to admit COVID-positive patients. COVID is great because it could boot Trump from office. She really is no different that her younger self who palled around with communist insurgents in Vietnam back in the day. She sat on an anti-aircraft gun, joked around with America’s enemies, and trashed the country. Hanoi Jane is a traitor, a ghoul, and totally in keeping with someone who is Trump deranged (via Free Beacon):

How the left really feels about Covid. Hear from @Janefonda that “Covid is gods gift to the left.”@FBillMcMorris pic.twitter.com/dGnlmblrzX

Jane Fonda, a Biden campaign surrogate known for fraternizing with enemy soldiers during the Vietnam War, called the coronavirus "God's gift to the Left."

"I just think that COVID is God's gift to the Left," Fonda said. "That's a terrible thing to say. I think it was a very difficult thing to send down to us, but it has ripped the band-aid off who [Trump] is and what he stands for and what is being done to average people and working people in this country."

She described the coronavirus pandemic as an "existential crossroads" for humanity to address issues like climate change.

"What a great gift, what a tremendous opportunity, we are so lucky, we have to use it with every ounce of intelligence and courage and wherewithal we have," she added.

This is who the left is at heart. They don’t care about you; they can’t. Most Biden supporters have probably never even met someone who works for a living. They’re all snobby, condescending, and overly educated traitors who infest our cities and some of the suburbs and think only they can have an opinion because they have a college degree. Yes, these people hate those who don’t have BAs. It’s stunning. It’s sad. It’s indicative of the inherent rot within these people. They’re rotten. They’re not Americans.

We should thank GOD because we got hit with a virus that killed 200,000 people and could end with Trump being defeated. Like their former Soviet brethren, no body count is too great to achieve an aim for liberal so-called Americans. And it’s very fitting that Hanoi Jane was there to express how these people truly feel about, well, everything. If you don’t submit to their political correctness, their socialism, their warped worldview, they hope for disaster. In this case, a viral outbreak to better the chances for a senile old man who thinks the reason we can live through COVID safely is because of black women re-stocking grocery shelves.