Chicago's Mayor Daley Issued 'Shoot to Kill' Orders in '68. Do We Need That Again to Quell Leftist Mayhem? 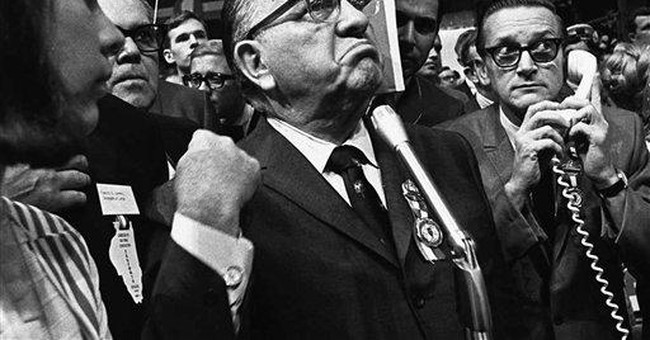 Chicago was rocked by a wild Sunday night of mayhem and looting Sunday. Pandemonium erupted after misinformation about a police shooting spread throughout the city. Over 100 arrests have been made since this chaotic night. Social media posts reportedly encouraged looting downtown, which led to the drawbridges to be raised that night in an effort to curb the movement of these rioters (via WGN9 Chicago):

Chicago’s top cop said about 100 people were arrested and 13 police officers were injured after a night of looting in downtown Chicago.

Widespread damage was reported throughout Chicago after looting and rioting began around midnight Monday. Witnesses reported hundreds of people smashing their way into stores throughout Michigan Avenue, areas in the South Loop and the near North Side.

Chicago Police Supt. David Brown said the looting started as a result of misinformation following a police-involved shooting in Englewood.

Brown said police were called to the 5700 block of Racine Avenue for a call with a man with a gun. Brown said that suspect was spotted and officers attempted to interview the man but he quickly fled. He said as the man was running away, he pointed a gun at officers and fired shots. Officers returned fire and struck him.

The man, 20, was taken to the University of Chicago Medical Center and is expected to survive.

Chaos in Chicago last night as mass looting broke out after police officers returned fire on a suspect that reportedly shot at them
pic.twitter.com/T5YWLPfNtj

.@nbcchicago reporting 12+ stores on #JewelersRow in the Loop completely cleared out. #Chicago

Looting continues in downtown Chicago as of 5:45am. These people are coming out of the Block 37 mall on Randolph west of State Street. Looting has been going on all over downtown and the Magnificent Mile since around midnight. Police are all over the place. @WBBMNewsradio pic.twitter.com/qrBwm8KCZX

There is a false rumor on social media that police officers killed a 15-year-old on Sunday. Here are the facts:
- Officers responded to 911 calls about an armed man in Englewood
- A 20-year-old suspect fired at officers, gunfire was exchanged
- The suspect is in stable condition

What is going on? It’s been weeks since the tragic death of George Floyd in Minneapolis set off this latest wave of Black Lives Matter activism, which quickly devolved into rioting, political correctness nonsense, and cultural Marxist shenanigans. This isn’t about Floyd anymore. Nope. Sorry—it’s about the far left trying to erase American history and advance its woke narrative. What does seizing a section of Seattle do for police reform? If anything, it only supports the notion that we need the police. Yeah, that’s another tangent with the defunding law enforcement nonsense. It’s about setting the stage for the eventual abolition of police. Don’t trust left-wingers. Don’t respect left-wingers. Period. It wasn’t always like this, as many of you already know. Democrats used to support cops and law and order. Yes, he ran as a Republican, but Mike Bloomberg was pretty much a pro-school choice, pro-law enforcement, and pro-law and order Democrat running the Big Apple. In Chicago, following the assassination of Martin Luther King, Jr., the city had some rioting and the late Mayor Richard J. Daley, issued “shoot to kill” orders for rioters and looters (via Chicago Tribune):

Many U.S. cities--including Detroit; Newark, N.J.; and Los Angeles--were convulsed by riots in the mid-1960s. Chicago had not escaped unscathed; riots in the Humboldt Park neighborhood in 1966 had seemed major when they happened. Yet the city had been spared the kind of devastation left in the wake of Los Angeles' Watts riots of 1965. With the assassination of King, the city's luck ran out.

Throughout the weekend, police in the Lawndale and Austin neighborhoods on the West Side and in the Woodlawn neighborhood on the South Side rushed from emergency call to emergency call as mobs of men, women and children moved from store to store, breaking plate-glass windows and taking what they found. Television sets, clothing, food and liquor were carted away from largely white-owned businesses that lined Madison Street and Homan and Kedzie Avenues. Fires blazed out of control across the West Side.

Not long after sunset Friday, Army units and the first of 3,000 Illinois National Guard troops arrived to back up police, who had no training for such a civic catastrophe. Military units and fire department crews were greeted by sniper fire, but no soldiers, police or firefighters were killed or seriously hurt. By Saturday afternoon, soldiers in Jeeps bristling with machine guns had secured the overpasses along the Eisenhower from downtown almost to the city's western edge. The fires, shootings and looting continued through Sunday night, but by Monday morning relative quiet had returned.

Mayor Richard J. Daley later told reporters that he had ordered police "to shoot to kill any arsonist or anyone with a Molotov cocktail in his hand . . . and . . . to shoot to maim or cripple anyone looting any stores in our city." In the first two days of rioting, police reported numerous civilian deaths but were unable to determine whether they were caused by the riots or other crimes. No official death toll was given for the tragedy, although published accounts say nine to 11 people died during the rioting. Three hundred fifty people were arrested for looting, and 162 buildings were destroyed by arson. Bulldozers moved in to clean up after the rioters, leaving behind vacant lots that remained empty three decades later.

We need that back. We need that no-nonsense attitude back right now. This rioting and looting nonsense has gone on for weeks, with Democrat leaders either endorsing or doing next to nothing to restore law and order in these places. That’s why federal agents are being deployed in these lawless hell holes. Instead, Chicago Mayor Lori Lightfoot is acting as the chair of the COVID Karen committee, appalled that people are—gasp—outside whilst ignoring that Chicago is once again a shooting gallery. Screw dead kids, this issue can be used to attack Trump. It’s pathetic. And it’s getting people killed. These Democrats cannot govern. They cannot be trusted. And this is just a slight glimpse into what we’ll see if Joe Biden is elected.

Chicago Mayor Lori Lightfoot to reporter who asks if lootings are happening again because officials refused to prosecute looters the first time:

It's called a pandemic, people. This reckless behavior on Montrose Beach is what will cause us to shut down the parks and lakefront. Don't make us take steps backwards. pic.twitter.com/FHxeYfH7Wf

We've Discovered the Real Reason the CDC Is Requiring All Kids Wear Masks in Schools
Townhall
'Someone got a phone call': Army general protects his account after losing Twitter battle to Hillsdale student
Twitchy
Department of Justice Fires Warning Shot at Ballot Audits as the First Step in Its Campaign to Keep Democrats in Control of Congress
Redstate
Biden's COVID and Border Policies Collide With a Discovery at a Texas Whataburger
PJ Media