Oh, So ESPN Peddled Some Fake News about the WNBA Players Walking Out During National Anthem 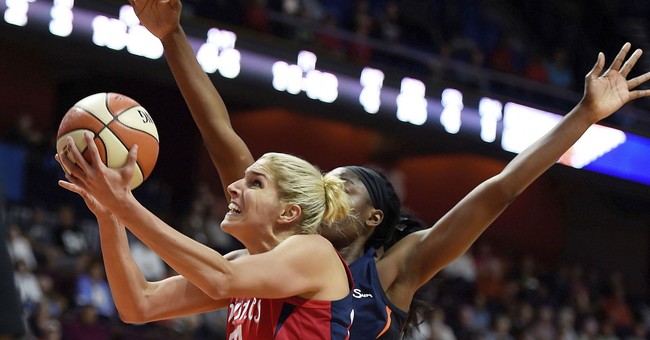 Look, folks, I’ll be brief here because as you can see by the title it’s about the WNBA and nobody watches that—nobody. Yet, when it comes to these national anthem protests, any video is going to get views. If the anthem played during bowling, it might—I don’t know—and someone took a knee, there would be views. Curling would see views not seen since the Olympics probably. Anything on ESPN ‘The Ocho’ involving anthem protests would get views. So, it’s no shocker that when the anthem played during a game between the Seattle Storm and New York Liberty last weekend, nine million people watched. It shows the players walking off the court as the Star-Spangled Banner played. Bronson covered this last week.  The problem: it’s fake news.

Yeah, after all that, the players took to the locker room before the anthem played and it took ESPN some 12 hours to finally correct their ‘woke’ mistake (via Outkick):

While attribution of the quote is contested the sentiment is not. It was further proven on Saturday when ESPN put out a tweet about two WNBA teams allegedly walking off the court during the National Anthem.

The tweet (which has still not been taken down) has nearly 9M views. It has been retweeted nearly 15K times and has climbed over 26K likes.

It was also a lie. An accidental misrepresentation, at best.

Correction: Players left the court before the national anthem was played, not during. https://t.co/MdW7HtMO1P

This is not accurate. The teams decided to respectfully stay in the locker room for the anthem. This is not an accurate representation of what happened. As you can hear the anthem was NOT playing. @wnba @nyliberty @seattlestorm @espn https://t.co/Hqc20Ul0WE

Clay Travis of Outkick added that Holly Rowe was the reporter who clarified what actually happened. Going ‘woke’ can either make you go broke, which is what’s happening to A&E post-Live PD cancellation, or make you look like total idiots. ESPN has long dabbled in the politics and the political correctness lane and they crashed again. Stay in your lane, folks; stick to sports. Your massive subscription losses point to that from your customer base as well.

Recommended
The Great Democratic Panic
Byron York
Share this on Facebook
Tweet
John Kerry Is Failing As Climate Czar. This Is Why.
Katie Pavlich
Mayorkas Ripped for Claiming His Border Plan Is 'Working'
Katie Pavlich