It's Official: The Lefty Mob Has Scalped the Washington Redskins 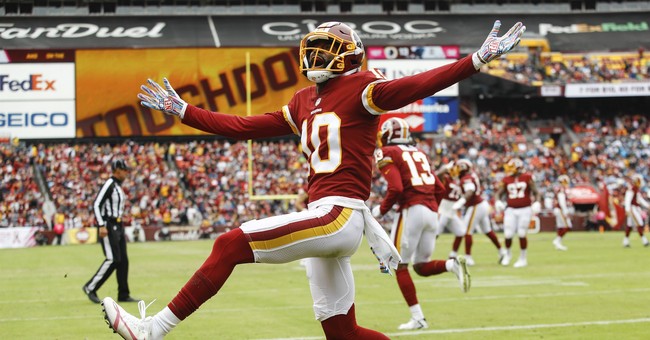 Well, it’s not shocking in the slightest, but the Washington Redskins are no more. Bury my heart in Washington DC, they’re going to change the name because apparently white liberals find it offensive. Remember, 90 percent of Native Americans couldn’t care less about the name. This comes after the officer-involved death of George Floyd in Minneapolis on May 25 sparked nights of rioting and then a soft quasi-cultural revolution in which the institutional Left is coming after everyone and anyone whose name is considered problematic. Confederate statues were targeted, as were those dedicated to Union soldiers. Ulysses S. Grant was ripped down, and you bet the Founding Fathers are next. With major brand names pulling advertising, it seemed there was little choice (via NBC News):

Washington's NFL team announced Monday that it will change its name, long condemned as an anti-Indigenous slur.

The move comes amid growing pressure from sponsors and less than two weeks after the team announced it would conduct a "thorough review" of the name.

The team did not say what its new name will be.

"Today, we are announcing we will be retiring the Redskins name and logo upon completion of this review," the team said in a press release.

NFL Commissioner Roger Goodell said in a statement that he was "supportive of this important step."

Team owner Dan Snyder said he wanted to take into account the "proud tradition and history of the franchise" but also wants to include input from others including the organization, the community and the National Football League.

Look, I’m a die-hard New York Giants fan. As bad as we are, we swept the Redskins last year and I couldn’t care less about them, but when the lefty mob comes after folks for dumb reasons, it impacts us all. Again, this is only happening because white liberals are once again dictating what’s racist and what’s not; people of color, Native Americans especially, are not leading this charge. There is nothing more insufferable than the political correctness mob. It becomes even more toxic when some progressive white guy or gal decides to be starting quarterback in that effort.

But what's done is done. What should the new name be?

How about The Capitol Shills?