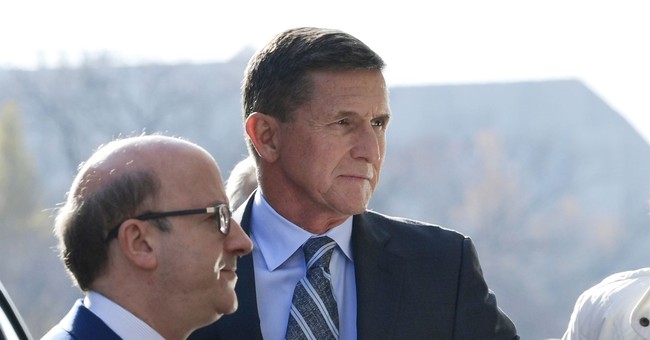 It was Custer’s Last Stand for the anti-Trump segment of America. It was the Battle of Waterloo for the Russian collusion peddlers. And they all lost. For Michael Flynn, President Trump’s former national security adviser, his long legal nightmare is over. The Flynn case shows just how corrupt and deranged the Federal Bureau of Investigation had become, along with the lawyers at the Department of Justice. The government Flynn swore to protect as a security official and as a member of our military went to war against him and nearly won.

As part of any incoming administration, Flynn has some phone calls with then-Russian Ambassador Sergey Kislyak. These calls were supposedly evidence of collusion or some impropriety relating to the former. In reality, that was not the case. The FBI had no evidence of collusion. They had no ground to interview Flynn at all. They did anyway because James Comey and Andrew McCabe, the respective disgraced director and deputy director of the FBI, wanted to scalp him. But the agents who interviewed him felt that he didn’t lie to them. Now, new notes from fired FBI Agent Peter Strzok shows that Comey even admitted the Russian calls were “legit.” Oh, Strzok is the dude who sent tens of thousands of anti-Trump texts to his mistress, Lisa Page, and brought the biased nature of the FBI and DOJ into the limelight during this whole Russian collusion fiasco.

Here’s where it gets odd. The FBI was wrapping up its investigation into Flynn when Robert Mueller is tapped as the newly appointed special counsel for the DOJ in 2017. This occurred after Comey was fired for cause by Trump. Mueller took over the collusion probe from the FBI and rehashed the Logan Act angle that was used to target Flynn. We now know this was suggested by none other than Joe Biden. They rehashed it, put the screws to Flynn, who then opted to this shoddy plea deal.

Judge Emmet Sullivan accused Flynn of being a traitor, said he would probably sentence Flynn to jail time that went beyond the recommendation, but luckily gave Flynn the option to hold out on sentencing, which he did. this allowed for his case to be ripped apart by his new legal team hired in 2019, led by Sidney Powell, who took apart the government’s case piece by piece. The plot to entrap Flynn, the misconduct, the exculpatory evidence was so much that the DOJ, now under Attorney General William Barr, filed a motion to dismiss the case. Sullivan doubled down, tapped a retired federal judge, John Gleeson, to fight the DOJ motion, and said he would permit amicus briefs to be filed. In other words, he painted a target on Flynn’s back and invited every anti-Trump lawyer to file briefs trashing him. Flynn’s team filed a writ of mandamus seeking to remove Sullivan as the judge from this case and dismiss the case in general. The appeals court granted the writ and this week they handed down their decision: drop the damn case. The Wall Street Journal editorial board elaborated further:

Mr. Flynn initially pleaded guilty to lying to the FBI about his phone calls to Russia’s ambassador during the presidential transition. But after hiring a new attorney and the discovery of evidence that had been denied to the defense, Mr. Flynn sought to vacate his plea. After an investigation ordered by Attorney General Bill Barr, Justice asked for the charges to be dropped, saying it no longer believed it could prove that Mr. Flynn’s statements to the FBI were false and that they were not even material to a legitimate investigation.

That meant there was no longer a dispute between the prosecution and the defense. But instead of dropping the case, Judge Sullivan scheduled a hearing and assigned former federal judge John Gleeson to present arguments against Justice’s motion to dismiss and examine if Mr. Flynn should be charged with perjury. Judge Sullivan invoked Rule 48 of the Federal Rules of Criminal Procedure, which says that the government can dismiss a case only “with leave of the court.”

The appellate judges disagreed with that interpretation. The key quote from Judge Rao’s opinion is from Fokker: Rule 48 “gives no power to a district court to deny a prosecutor’s . . . motion to dismiss charges based on a disagreement with the prosecution’s exercise of charging authority.” Those words came from Judge Sri Srinivasan, an Obama appointee.

Columnist Kimberley Strassel also noted that this decision was key for another reason: a federal court has acknowledged the FBI running amok in 2016. Remember that the FBI used a political opposition research file compiled by an ex-MI6 spy, Christopher Steele, which was funded by the Democrats to secure a spy warrant on Carter Page, a former Trump campaign official. It was also used to set off Crossfire Hurricane, the spy operation against the Trump campaign proper. And also, laid the foundation for Flynn’s case (via WSJ):

House Judiciary Committee Democrats were back at their “politicized Justice Department” theme this week, calling a disgruntled former lieutenant of special counsel Robert Mueller to accuse the department of giving special treatment to President Trump’s allies. Too bad the testimony came on the very day a federal court confirmed that Mr. Mueller’s team and the Federal Bureau of Investigation engaged in misconduct.

Largely overlooked was the decision’s rebuke of the FBI and the Mueller team. The D.C. Circuit became the first federal court to acknowledge the misconduct that Attorney General William Barr is trying to bring to light. Most of the courts that oversaw Mr. Mueller’s prosecutions were asked to do no more than rubber-stamp a plea deal or sign off on a jury verdict. But Mr. Flynn, backed by tenacious lawyer Sidney Powell, fought the charges—forcing the Justice Department to review its actions, acknowledge its bad acts, and move to dismiss its case. Democrats and the press cast this outcome as evidence of Mr. Barr’s “politicization.” The circuit court begs to differ.

The Justice Department’s credibility was at stake here. Judge Sullivan bought into the same Democratic conspiracy theories, which is why he refused Justice’s motion to dismiss and appointed retired judge John Gleeson to act as shadow prosecutor. He argued the Justice Department wasn’t entitled to the usual “presumption of regularity.” And if the circuit judges thought there was anything to claims that Mr. Barr was playing political favorites, it could have allowed the process to continue.

Instead they bluntly noted that there was no “legitimate basis” to question the department’s behavior. They even slapped Mr. Gleeson for relying on “news stories, tweets and other facts outside the record.” By contrast, Judge Rao’s opinion notes: “The government’s motion includes an extensive discussion of newly discovered evidence casting Flynn’s guilt into doubt.” It points out that this includes “evidence of misconduct by the Federal Bureau of Investigation.” It finishes by noting that each government branch must be encouraged to “self correct when it errs.”

The court’s conclusion is obvious. All it had to do was look at the voluminous evidence the Justice Department supplied. Its briefs proved the FBI had improperly pursued Mr. Flynn, keeping open an investigation that produced no evidence, ginning up a “violation” of the seldom-enforced Logan Act, sandbagging Mr. Flynn with an interview that had no “legitimate investigative basis.”

Ouch. Still, this week was very good for American justice. At times, it takes time, but it prevailed. Flynndication indeed.