Did GW University Try to Sweep the Destruction of George Washington Bust Under the Rug? 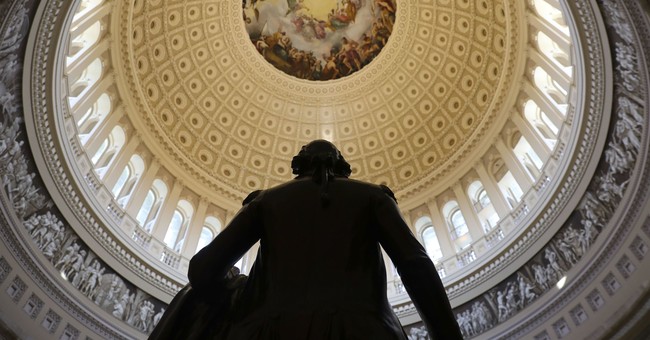 They took down Washington. Who? That remains to be seen, as the crime appears to have been committed three weeks ago. The bust of George Washington at the university that bears his name in D.C. was toppled. Young America's Foundation Kara Zupkus floated her theory on Twitter that the bust might have been removed to avoid destruction or vandalism. It's now determined to be the latter. Zupkus noted that it seems as if George Washington University tried to sweep this whole matter under the rug. Jonathan Turley, a law professor at the university, wrote that Zupkus noticing the bust missing appears to be the only coverage about the incident. He noted the school administration has been silent and that GW's student newspaper, The Hatchet, hasn't been rushing to figure out what happened to the bust which is located visibly on campus (via Jonathan Turley):

Other statues and memorials to Washington have been destroyed around the country.  The news of the toppling of our own statue received surprisingly little coverage by The Hatchet and I did not hear any public statement from our Administration. I would have hoped that our university would have denounced this criminal act as a senseless and unacceptable act.

It certainly would seem to warrant a tad more than “A GWPD officer found the head of a George Washington statue removed from a stand. The head was found laying at the base of the stand. GWPD called Facilities Services following the discovery.”

That sounds like the head was somehow temporarily misplaced or lost rather than being ripped from its foundation and tossed to the ground.  That would seem a rather important story for the university — worthy of not just note but actual discussion.  If this was not part of the destruction of public art around the city, it would be helpful to consider the alternatives . . . whatever they may be.  Toppling this giant bust is no easy task. It would take time and considerable effort.  Notably, it is in the virtual center of our campus.

Indeed, the incident would have gone without mention (beyond the empty stand) had it not been for a former GW student tweeting out the missing bust and then a later picture of the scene after the attack.

A stunning image– looks like GW may have removed George Washington's head to protect it from riots in DC. Truly disconcerting times pic.twitter.com/RkzMZ9okCH

What's going on? Turley lamented that many education institutions are burying their heads in the sand over similar acts of vandalism to avoid being torched by the progressive mob. Right now, that roving band of nutjobs is engaging in a cultural revolution—and they're winning. From The New York Times to the sciences, and now food publications, the "woke" are flexing their muscles and it's terrifying. Conservatives appear unwilling or unable to confront this madness. We wouldn't be here without George Washington, and maybe that's the point. The Left hates America and its history. What better way to show that than trying to erase him from the public? Oh, and given this assault on our entire history, can we please put to rest that this was all about Confederate statues? It wasn't. It never was the reason.