Hey, The Washington Post Published a Piece About Trump Supporters on BLM...And It's Not Lefty Nonsense 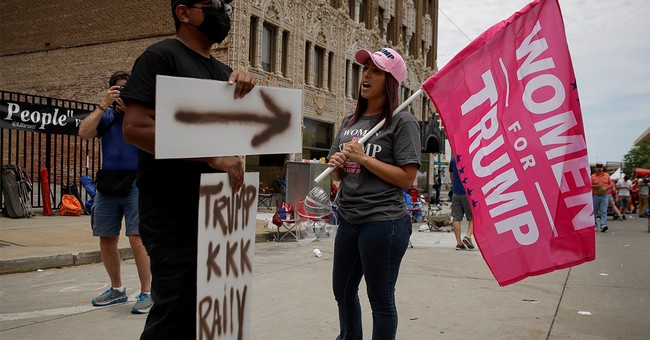 The Washington Post penned a fair piece about the Tulsa rally President Trump held over the weekend. It was grounded. It was based on the people interviewed at the scene. It’s a great piece. Simply put, reporter Robert Klemko decided to ask what Trump supporters at the rally thought of the Black Lives Matter counter-protesters at the venue. And shockingly, supporters of the president were portrayed as—wait for you, you ready—decent people with open minds. I know for Hillary Clinton, Joe Biden, and Susan Rice, this may come as a surprise since we’re awful people, “deplorable” really, who are destined to be in the trash heap of history. Funny they should say that as the Left engages in a campaign that seeks to put all of American history in the trash can for not being woke or something. For one young Trump supporter, he actually wanted to go to the rally to see the BLM activists. The Post quoted one Trump supporter, Ken Bonvillian, who lamented at the violence that has broken out in recent weeks over two officer-involved deaths that have garnered national attention.

“I’ll just tell her it’s wrong the way they’re doing things,” Klemko wrote quoting Bonvillian concerning what he will tell his granddaughter regarding what he saw that night. “Violence is not the answer; it’s not the way we grew up learning about the history of our country.”

Regarding those peacefully protesting, Klemko added that Mr. Bonvillian had a more empathetic view.

“They want equality, justice, fairness…They want to make sure that we have a legacy to pass down to generations to come. And I really do think Trump wants that (via WaPo):

Several pro-Trump families echoed Bonvillian’s sentiments as they made their way home from the rally or stood watching the activists protesting systemic racism and police brutality. The demonstrators are misinformed, they told their children. Trump wants the best for all people, including African Americans, several parents said. We don’t see color, and they shouldn’t either.

“I want to be brave like my brothers,” Alex told her father’s girlfriend.

Richard Standridge, Alex’s dad, told her that the protesters were yelling at them because he was wearing an American-flag-patterned shirt, the flag her brothers were willing to “die for if they have to.”

“She has to pick her side,” Standridge said. “I can’t pick her side for her. And to do that, she has to be able to see what’s going on. That’s the best thing we can teach our kids.”

Logan Renfro, 13, of Fayetteville, Ark., joined his grandmother, Anne Harrison, 57, a couple of blocks from the BOK Center, where they watched police disperse protesters with pepper projectiles.

As police cars surged down Boulder Avenue with sirens blaring, Joshua Brown, 12, hawked an assortment of flags rising from a cart on the sidewalk with his father, Jeff Brown, 56. One flag depicted Trump as a sleeveless soldier carrying a blazing machine gun, similar to Rambo. Another read, “Trump 2020: Make Liberals Cry Again.”

He said his son, who is home-schooled, demanded to come to the rally with his father from their home in Albuquerque, specifically to see the Black Lives Matter protests. Joshua wore a shirt reading “LGBT” with a drawing of the Statue of Liberty above the letter L, a rifle above the letter G, a glass full of beer above the letter B and a picture of Trump, in full-throat, above the letter T.

“But Joshua’s going to have to form his own opinions,” Brown said. “In our family, we use our brains.”

For starters, bravo on the piece, Mr. Klemko. It’s worth a read. Yet, I’m worried you have now opened yourself up to being canceled by the far-left wing mob which has demonstrated that they have increased their reach and have become more unhinged during this presidency. Remember, Lee Fang was forced to apologize to merely interviewing black people who wonder why the BLM outrage is never seen when blacks are violent within their own communities. You’re offering a differing narrative here about how the liberal media views Trump supporters and Republican voters. Watch your six, sir. These lefty operatives have already forced the opinions section of The New York Times to surrender to these ‘woke’ clowns. The Philadelphia Inquirer fared no better. They will find you. Until then, be safe.

Yet, perhaps we can rehash the Cato Institute’s 8,000 persons study on the Trump coalition that appears to have been glossed over many moons ago. Trump is unique in the sense that his base of support is rather diverse. Two of the five voter blocs Cato categorized that back him were both economically progressive and open to voting for both Democrats and Republicans in elections. But this gets lost when the media just thinks Trump and his supporters are racist, which has lost all meaning. It’s the go-to maneuver for leftists who want to shut you up and right now, they’re winning the culture war. How many brands, associations, and publications have either been scalped or thrown up preventative measures (i.e. changing brand names) to prevent the mob from coming for them? When fruit snacks start to do this to avoid being torched by the progressive horde, you know we’re in trouble.

As this article shows, it’s not conservatives or Trump supporters who are problematic. It’s the Left. It’s always the Left. We’re tearing down statues of Ulysses S. Grant now folks. Sadly, we can’t have a discussion with these people, as the chance of being assaulted if you approach them remains high.