Canceled: Joe Biden Once Called Confederate Heritage Group 'An Organization Made Up of Many Fine People' 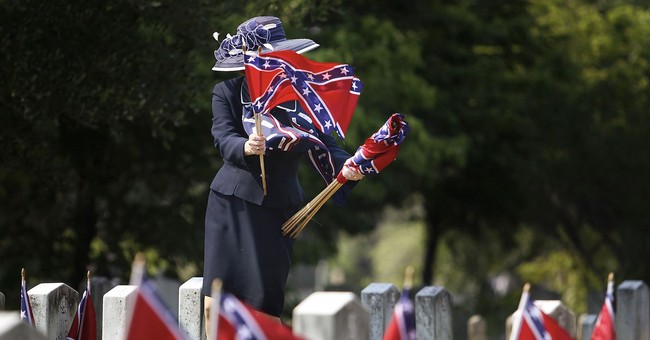 Again, if the Left didn’t make a big deal about canceling people, running amok with political correctness, and overall being hypocrites, this wouldn’t be an issue, but here we are. Joe Biden now has his own ‘very fine people’ moment that the Left loves to bring up to attack President Trump, albeit erroneously. We’ll get to that in a second.

We’re now in the second wave of the anti-Confederate fervor that’s swept the progressive Left. They always targeted the statues and the flag. Now, we’re going after the names of U.S. Army bases. These names weren’t an issue for decades, but the left-wing mob’s grand campaign of trying to rewrite and erase history has been kicked up a notch since the death of George Floyd at the hands of Minneapolis Police on May 25. His death sparked nationwide unrest and rioting. It’s all about symbolism, folks. These clowns, at some level, think if we just remove a statue—it will bring us closer to a better version of America or something. That’s not how this works. And if we’re going by the Left’s rules on what is acceptable at a historical level, the criterion of which is a historically illiterate acid trip in itself, then Joe Biden should drop out of the 2020 race. He called a Confederate heritage group an organization made up of fine people. Someone get the pitchforks ready (via Fox News):

Joe Biden called the United Daughters Of The Confederacy "an organization made up of many fine people who continue to display the Confederate flag."pic.twitter.com/uWRNUCU4sO

…speaking at a Senate Judiciary Committee hearing on July 22, 1993, during the confirmation process for Associate Justice Ruth Bader Ginsburg, Biden himself offered something of a positive endorsement for the United Daughters of the Confederacy (UDC), which has been linked to the Ku Klux Klan.

“I, too, heard that speech and, for the public listening to this, the senator made a very moving and eloquent speech," Biden said, referring to remarks by then-Alabama Democratic Sen. Howell Thomas Heflin. "As a son of the Confederacy, acknowledging that it was time to change and yield to a position that Sen. Carol Moseley-Braun raised on the Senate floor, not granting a federal charter to an organization made up of many fine people who continue to display the Confederate flag as a symbol.”

In 2019, when we were dealing with another spat over Robert E. Lee statues, Biden, unsurprisingly, criticized Trump, but supported the restoration of the former Confederate general’s U.S. citizenship back in 1975 (via Washington Examiner):

Joe Biden, who last week blasted President Trump over a protest to bring down a statue of Robert E. Lee, voted to restore the Confederate general's citizenship early in his Senate career.

In 1975, Biden joined a unanimous Senate vote to restore citizenship to Lee, 110 years after the Virginian surrendered his Army of Northern Virginia to the Union general and future President Ulysses S. Grant. There were 10 dissenters in the House of Representatives, among them Rep. John Conyers Jr., a black Democrat from Michigan, who scoffed that the resolution was “Bicentennial fluff." Conyers retired in 2017.

Controversy over Lee was stoked last week when the former vice president, a leading 2020 Democratic presidential candidate, slammed Trump over his remarks after the violent "Unite the Right" rally in Charlottesville, Va., in August 2017 in which white supremacists gathered to denounce plans to take down a Lee statue. After Biden's video, Trump responded that he was referring to supporters of Lee when he said there were "fine people" on both sides.

Again, this really isn’t a big deal for normal people, but the unhinged Left is taking these matters into a full-blown effort to destroy American history. Why is the Korean [Me] defending the Confederacy? It’s American history—all of it. It may not be pleasant as every nation has dark spots, but it’s part of our history nonetheless and it shouldn’t be erased because some people are uncomfortable. It’s nonsense. There are many nuances regarding the events leading up to the American Civil War that we simply do not have time to discuss right now, but it is one of the most violent and transformative eras in our history. And yes, some of this nation’s best generals fought for the Confederacy. It happened. Get over it.

Yet, it’s not really about the Confederacy. It’s not. Does anyone really think if we ripped all the Confederate statues down, this mob would just stop and be satisfied? No. George Washington and Thomas Jefferson are next. In fact, Jefferson has already been targeted. Christopher Columbus was trashed, folks. It’s absolute insanity. These people hate America and American history. It must all be blown up and re-written through their own unhinged ‘woke’ paradigm. Some might feel uncomfortable dying to protect Confederate heritage—I get it—but this is about holding the line to the rest of this nation’s history.

As for Biden, well, he’s screwed. We’re going to see the media ignore these remarks because that’s what they do. But these remarks certainly qualify him to be canceled. If OSU coach Mike Gundy can be dragged for wearing a One America News t-shirt, then these remarks should disqualify him from office based on liberal standards. Sorry, these are their rules.

Congrats, liberals, you have a candidate who actually called Confederates very fine people.

Oh, and before we go, let’s go to the 2017 remarks that are butchered by the press regarding Trump’s remarks on Charlottesville. No, he didn’t call white supremacists and Nazis fine people (via LA Times) [emphasis mine]:

QUESTION: You said there was hatred, there was violence on both sides. Are…

TRUMP: And -- and -- and if you reported it accurately, you would say (inaudible).

QUESTION: George Washington and Robert E. Lee are not the same (inaudible)…

TRUMP: OK. Good. Are we going to take down the statue? Because he was a major slave owner. Now, are we going to take down his statue? So you know what? It’s fine. You’re changing history. You’re changing culture. And you had people, and I’m not talking about the neo-Nazis and the white nationalists, because they should be condemned totally. But you had many people in that group other than neo-Nazis and white nationalists. OK? And the press has treated them absolutely unfairly. Now, in the other group also, you had some fine people, but you also had troublemakers and you see them come with the black outfits and with the helmets and with the baseball bats. You’ve got -- you had a lot of bad -- you had a lot of bad people in the other group…

Okay, granted, maybe not the best way to phrase it, but that part always gets chopped off when folks bring up Trump’s 2017 Charlottesville remarks. It’s not the first time the media has purposefully butchered his remarks by the way, but you knew that already.

now do the full quote pic.twitter.com/06xE711Mzx