MAGA: With SpaceX Launch, Trump Leads Our Push to Make the US the Undisputed Leader in Space. 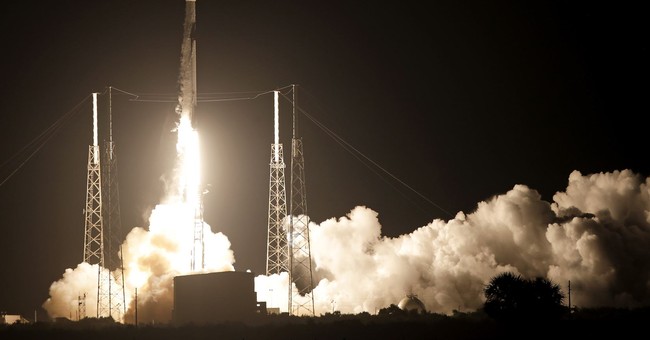 This post has been updated to reflect the new launch time.

Well, today is the day. Around 3:22 P.M. EST, the crew of this public-private space venture will make way for the International Space Station. SpaceX is about to end the nation’s reliance in Russia to get our astronauts into outer orbit. President Trump will attend the launch personally, and he’s right that this is a ‘Make America Great Again’ moment. It’s a great day for the country. First, we had the official unveiling and activation of Space Force, a new branch of the U.S. military, and now its civilian counterpart. It’s time the nation got back into the space game. In 2017, the lunar eclipse took the nation by storm, with scores of people making homemade protective eyewear after retailers reported their stocks being wiped out. Americans are still curious about space it would seem, or anything related (via Politico):

It will also make history by taking the first humans to orbit aboard a commercially-owned spacecraft, ushering in a new era for more routine trips not only for NASA but private entrepreneurs and eventually even average citizens.

"That opens up whole new horizons for the future," said former Republican Rep. Robert Walker, a leading space consultant and lobbyist who has advised Trump on space policy. "It means that as we achieve success in that arena we will have people flying who will not necessarily walk through NASA's front doors."

The Commercial Crew program, a unique public-private partnership, officially began in the Obama administration. But Trump has embraced it as his own first leap toward reclaiming American leadership in space and boosting private investment.

Trump, who along with Vice President Mike Pence is scheduled to be on hand for the launch, has made revitalizing the space program a top priority, including setting an ambitious goal of returning humans to the moon by 2024, reforming federal regulations to help unleash a new space economy, and establishing the U.S. Space Force, a new military branch dedicated to space.

The SpaceX journey is well documented here. Well, we’re less than an hour from launch. Our push to be the undisputed leaders in outer space is about to begin:

WATCH: @TimMurtaugh explains the significance of the SpaceX launch and the possibilities created by the Trump admin teaming up with the private sector for this historic project.

"President Trump is very serious about America grabbing and maintaining the lead in outer space." pic.twitter.com/uLQ7FtovBx

Air Force 1 arrives at @NASAKennedy with special guest @POTUS on board to watch us #LaunchAmerica with American astronauts from American soil for the first time since 2011. pic.twitter.com/xWNIsS5nfM

WATCH: NASA astronauts Doug Hurley and Bob Behnken have boarded the new SpaceX Dragon capsule ahead of their launch into orbit. https://t.co/MQD567KRtN pic.twitter.com/0VIVaFTPKV

The hatch is closed. The crew is settled in. #LaunchAmerica is on. pic.twitter.com/qZTR3QAQjM

We have liftoff. History is made as @NASA_Astronauts launch from @NASAKennedy for the first time in nine years on the @SpaceX Crew Dragon: pic.twitter.com/alX1t1JBAt