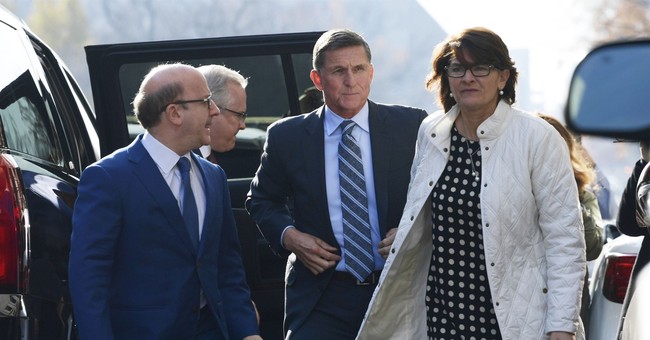 Judge Emmet Sullivan is biased against ex-National Security Adviser Michael Flynn. We all know this; it’s in the docket. The judge pretty much said that Flynn was a traitor and if he could—he wished he could charge him with treason. Flynn was engulfed in a vicious prosecution plot hatched by top FBI officials under the Obama Department of Justice. They had no evidence to go after the man. They had no evidence period. There was no Russian collusion. All Flynn did was speak to then-Russian Ambassador Sergey Kislyak which is part of his job. The Obama DOJ tried to weaponize a phone call, a simple run-of-the-mill phone call that any incoming administration makes that devolved into some shoddy Logan Act nonsense. The motion to dismiss the case by the Department of Justice under Attorney General William Barr makes it quite clear that Flynn is a victim of a Trump-deranged FBI run amok.

No matter what, James Comey and his clowns were going to scalp Flynn. Remember on January 5, 2017, soon-to-be-ex-President Barack Obama held a meeting with his top intelligence and law enforcement officials, where he gave his marching order to protect the FBI’s counterintelligence probe into Russian collusion. The preferable outcome would be for the Trump administration to never find out about it. Flynn was public enemy number one due to this innocuous call with the Russians, the reported animus Obama had for him over their views about radical Islam, and simple notion that Flynn probably would have found out about this scheme, along with several others once the Trump administration was in place. The unmasked him on NSA transcripts which were then leaked to the press, which was part of Team Obama’s strategy to inflict damage onto the Trump White House. Welcome to the deep state, folks.

Now, Judge Sullivan, being exposed for shooting his mouth off too early is refusing to drop the case, despite the lack of evidence, the history of prosecutorial misconduct, and no prosecutor. He resigned. He is instead allowing amicus briefs to be filed by the most anti-Trump elements within the legal field and he’s appointed a retired judge, John Gleeson, whose law firm represented Sally Yates, who became the face of the resistance at the DOJ when she refused to defend Trump’s executive order on immigration. Gleeson will fight the DOJ motion and see if they can file perjury charges against Flynn who plead guilty to bogus “lying to the FBI charges” after a sustained and relentless campaign from a Trump-deranged prosecution team who threatened him with total financial ruin.

It’s madness. Even liberal lawyer and law professor, Jonathan Turley, said that Judge Sullivan has made a total mess of this case and his overreach is bordering on allowing mob rule to take over his courtroom. He also said that given the evidence of DOJ misconduct, Flynn might have a case for a malicious lawsuit against the FBI. With Sullivan now opening the floodgates to the most insane anti-Trump lawyers, Flynn’s legal team has filed a writ of mandamus in the hopes of breaking Flynn out of legal purgatory and to end this horrific miscarriage of justice against a man who did nothing wrong. It should also be noted that Gleeson wrote in a 2013 opinion that the government has every right to drop a case that it has brought before the courts (via Fox News):

Some timing - this Motion has been granted by Judge Sullivan on the day Flynn's lawyers file the writ of mandamus.

[Of course, mandamus will stay these deadlines and the hearing date.] pic.twitter.com/LfFiofvTDw

(1) Grant the motion to dismiss; (2) vacate Sullivan's order appointing amicus; (3) reassign the case to another judge.

Michael Flynn's attorney Sidney Powell ... filed an emergency writ of mandamus to the D.C. Circuit Court of Appeals seeking the immediate removal of Judge Emmet Sullivan from the case -- and saying that under appellate precedent set by the "Fokker Services" case, Sullivan or his replacement must dismiss the prosecution, as the Justice Department has requested.

Writs of mandamus are extraordinary remedies, which are appropriate when there has been a "usurpation of judicial power" that is "clear and indisputable" -- and, Powell argued, Sullivan's behavior fits the bill. Powell pointed in particular to Sullivan's bizarre suggestion in December 2018 that Flynn had "sold out his country" and could have been prosecuted for "treason," as well as Sullivan's misstatements on the facts of the case.

Powell also demanded the appellate court vacate Sullivan's order appointing an "amicus curiae," or "friend of the court," to argue in favor of preserving Flynn's guilty plea on one count of making false statements to the FBI during an unusual January 24, 2017 White House interview. Oral arguments are set for July 16.

The amicus appointed by Sullivan, retired federal judge John Gleeson, has openly criticized the Trump administration's handling of Flynn's case, raising concerns that he was selected to improperly bolster Sullivan's efforts to keep the Flynn case alive even though both the government and defendant want it dismissed. (In 2013, Gleeson himself held that “the government has near-absolute power under [the Federal Rules of Criminal Procedure] to extinguish a case that it has brought" -- but he has since apparently changed his opinion.)

Sullivan’s actions have also been met with speculation that the judge is trying to keep this case going through the election cycle in the hopes that a new Democratic-run DOJ will drop the motion to dismiss. Well, Gleeson will file his brief on June 10, with arguments to be held in July. Sort of hard to deny the intention here.