Liberal Reporter: This Is Why The Whole Michael Flynn Fiasco Was 'Implausibly Stupid' From the Beginning 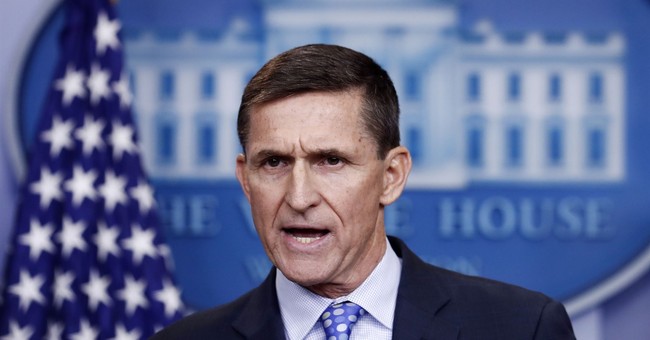 Former National Security Adviser Michael Flynn should be pardoned. The reasons behind his dismissal were garbage and the perjury charge was also ridiculous. The reason why Flynn received the wrath of the Department of Justice and was fired from the Trump administration stemmed from phone calls he had with then-Russian Ambassador Sergey Kislyak during the transition. These calls were made public in the press, which rehashes another disturbing aspect: classified communications were being leaked to the press by deep state actors.

The perjury charge seemed fishy from the start, especially when FBI agents reportedly told disgraced ex-FBI Chief James Comey that they felt Flynn did nothing wrong (via Washington Examiner):

In March 2017, then-FBI Director James Comey briefed a number of Capitol Hill lawmakers on the Trump-Russia investigation. One topic of intense interest was the case of Michael Flynn, the Trump White House national security adviser who resigned under pressure on Feb. 13 after just 24 days in the job.

There were widespread reports that Flynn had lied to Vice President Mike Pence about telephone conversations that he, Flynn, had with Russian Ambassador Sergey Kislyak during the transition in late December 2016. On Jan. 24, 2017, two of Comey's FBI agents went to the White House to question Flynn, and there was a lot of speculation later that Flynn lied in that interview, which would be a serious crime.

According to two sources familiar with the meetings, Comey told lawmakers that the FBI agents who interviewed Flynn did not believe that Flynn had lied to them, or that any inaccuracies in his answers were intentional. As a result, some of those in attendance came away with the impression that Flynn would not be charged with a crime pertaining to the Jan. 24 interview.

Nine months later, with Comey gone and special counsel Robert Mueller in charge of the Trump-Russia investigation, Flynn pleaded guilty to one count of making false statements to the FBI in that Jan. 24 questioning.

Now, as Bronson wrote last night, new documents show the FBI plotted a perjury trap, which is what Flynn’s lawyer had alleged back in October of 2019.

What did FBI Director Christopher Wray know and when? And why has he been covering for these scum bags? https://t.co/VeHUQz7OHd

#FLYNN docs just unsealed, including handwritten notes 1/24/2017 day of Flynn FBI interview. Transcript: “What is our goal? Truth/Admission or to get him to lie, so we can prosecute him or get him fired?” Read transcript notes, copy original just filed. @CBSNews pic.twitter.com/8oqUok8i7m

This is all part of the Trump-Russia collusion circus, the deep state antics that go with it, and the liberal media peddling an outright myth for two years. There is and never has been any solid evidence pointing to a Kremlin-Trump collusion scheme. Every bombshell ended up blowing up in the faces of the Trump-deranged reporters who jumped up and down thinking they had the smoking gun, which in actuality was nothing more than piles of crap. The anti-Trump resistance needed allies in the DOJ to get a scalp and help make the sting of the 2016 election feel less painful. So, it appears the FBI came a-knocking. Yet, not all liberal reporters found any of this credible from the start. Glenn Greenwald and Michael Tracey, two reporters who are in no way conservative or pro-Trump, thought the collusion narrative was nonsense, but they’re also not insane. They took no prisoners calling out their colleagues who peddled this myth when the Mueller report definitively said there was no evidence to the collusion delusion that liberal America so desperately wanted to be true. They’re also tried of the overreactions to…everything the Trump administration does from lefty outlets.

For Tracey, he tweeted why he felt the Flynn case was garbage from the get-go.

It was obvious from the beginning that Mike Flynn's ouster was a total set-up, because the circumstances of it were so implausibly stupid. They tried to criminalize completely routine phone conversations with the Russian ambassador

No sympathy for journalists and pundits who chose to egg on evidence-free #Resistance hysterics rather than dispassionately analyze the Flynn situation, his ouster was an obvious sham from the beginning https://t.co/I27wyNYz5K

If Trump pardons Mike Flynn, left/liberals will of course screech that it's some kind of fascist power-grab, when in almost any other context what they'd denounce is the FBI's blatant entrapment-style tactics. But when those tactics are used against political enemies, they cheer

“It was obvious from the beginning that Mike Flynn’s ouster was a total set-up because the circumstances of it were so implausibly stupid,” he wrote. “They tried to criminalize completely routine phone conversations with the Russian ambassador.”

Yeah, that pretty much sums it up. Do the right thing, President Trump. Pardon Flynn.