Not Smart: What These VA Teens Did in a Supermarket During Wuhan Coronavirus Outbreak Led to a Police Visit 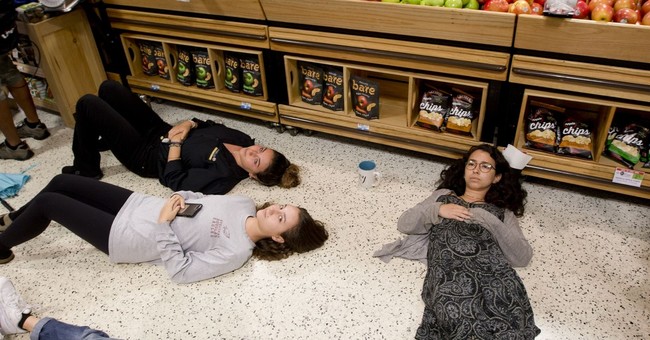 Kids do stupid things. We all know this. But that still doesn’t mean they deserve to be smacked upside the head when they, I don’t know, act like morons in a grocery store. Virginia has a Wuhan coronavirus outbreak. Neighboring Maryland has instituted a virtual lockdown and it’s quite possible those measures will be enacted by Gov. Ralph Northam in the coming days. With grocery stores being swamped, it’s not the time to be coughing produce and then sharing it on social media. That’s what some kids in the Purcellvillearea did, which prompted the police to get involved. Luckily, this turned out to be more along the lines of a bad prank, with “no criminal intent” reportedly to have been determined upon interviewing the kids involved and the footage of the incident (via WTVR):

A group of teenagers who filmed themselves coughing near others at a Virginia grocery store prompted a police investigation and prompted the store to discard fresh produce.

According to the Purecellville Police Department, two of the juveniles involved in the incident admitted to filming the video, but police determined there was no criminal intent in the incident.

Police say the teenagers filmed themselves walking near grocery store patrons and coughing into their sleeves.

Initially, grocery store employees thought that the teens were intentionally coughing on produce in the store. The store immediately removed some of the produce, but police later determined that no customers or produce were spit on or coughed on directly.

The teens admitted to getting close to other patrons and coughing into their own sleeves, while filming on their phones, according to police.

"It appears they were trying to do it as a practical joke and a prank," said Dufek. https://t.co/yI8swd3mA5 via @usatoday

A group of teenagers who filmed themselves coughing near others at a Virginia grocery store prompted a police investigation and prompted the store to discard fresh produce. https://t.co/NFA2uoskhH

Police in Purcellville, Virginia announced the results of its investigation into reports of "teens coughing on produce at the grocery store." https://t.co/N0aRdPKL4u

On March 19, 2020 the Purcellville Police Department notified the public of an incident which occurred on March 18th at a local grocery store involving juveniles reportedly coughing on produce, while filming themselves and posting it on social media. After a thorough investigation, the Purcellville Police Department identified the juveniles involved, notified their parents, and subsequently interviewed the subjects. The two juveniles questioned admitted to their involvement, and it was determined that there was no criminal intent. The investigation concluded the teenagers were getting close to other patrons and coughing into their own sleeves, while filming it on their phones. After viewing the video footage, officers determined no actual customers or produce were spit or coughed on directly, but we appreciate the store’s swift action in reporting the incident to police and removing any items in question to ensure the health of store patrons and employees. Due to the age of the minors involved, no names or video footage will be released.

I mean, c’mon guys. Reckless acts like this is what gets people sick in general. With a viral outbreak, it can expose God knows how many, including those who are most susceptible to dying from it. Now, these kids are by far not the most irresponsible—not by a long shot. We have total psychos licking toilet seats, which is part of the “coronavirus challenge.”