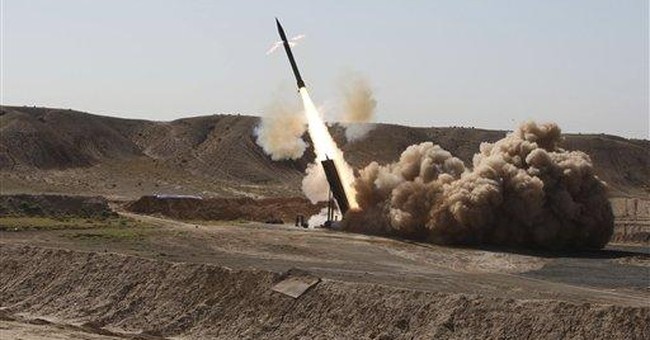 On January 3, President Trump ordered a drone strike on Iranian Maj. Gen. Qasem Soleimani. He was the commander of the elite Quds force. He was a terrorist with the blood of American servicemen on his hands. He was the region’s grim reaper. And now he’s dead. It was a win for the country. We killed a terrorist who brought nothing but death and destruction to the Middle East. Iran is the world’s largest state sponsor of terror. They vowed revenge and declared the U.S. military a terrorist organization. The chants of “death of America” were heard…again. Iran was going to strike back, we just didn’t know when or how. Well, as we speak, a coordinated missile attack was launched on U.S. forces in Iraq at al-Asad airbase. The timing is also significant, occurring right around the time the U.S. turned Soleimani into BBQ.

top journalist with another IRGC-affiliated agency, Tasnim, tweets this video of the "begining of the revenge"; adding that "sources report that Iranian ballistic missiles were fired at Ain Al-Asad base in Iraq that houses US forces."pic.twitter.com/6BDsUnefhW

#BREAKING: Iran Revolutionary Guards begin "fierce revenge" on US. Iranian ballistic missiles hit Al Assad military base in #Iraq, largest US base.
And It Begins.#Soleimani

Attacks were timed around 1.20 am exact same time the US assassinated Gen. Soleimani.#Iraq #AlAssadBase #Iran

I am told from US official these are short range ballistic or cruise missiles being fired from Iranian territory at multiple US bases and targets inside Iraq. https://t.co/xKh2NPiDyz

Missiles were fired early Wednesday in multiple locations across Iraq, a senior U.S. military source in the country told Fox News, describing it as a series of attacks on U.S. forces from Iran.

The source told Fox News' Jennifer Griffin: "Under missile attack from Iran. These are either cruise missiles or short-range ballistic missiles. All over the country." The missiles struck near Al Assad Air Base in Anbar, among other locations. There was no immediate word on injuries or damage.

MORE: A U.S. official confirms to @ABC News that ballistic missiles have been fired from inside Iran at multiple U.S. military facilities inside Iraq.

The facilities include Erbil in northern Iraq and Al Asad Air Base in western Iraq, the official said. https://t.co/myq7nvXUgO

Yet, also a good word of warning from National Review's Jim Geraghty. We'll keep you posted:

An ongoing Iranian military attack against US forces in Iraq would seem to be a prime time for online social media disinformation and trolls. Be wary about what you hear and see from unfamiliar accounts going forward.