Philadelphia Makes Historic Pick for Police Commissioner, But Can She Handle the City’s Antifa Issue? 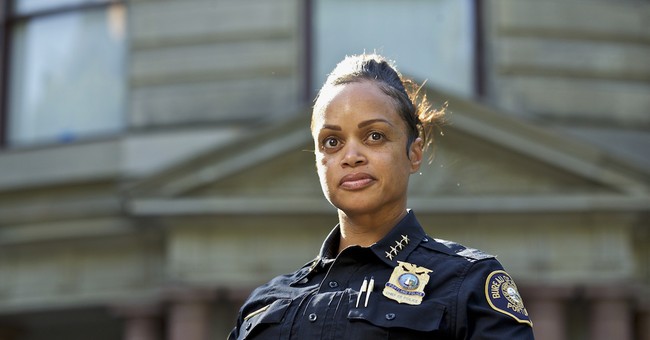 The city of brotherly love has a new police commissioner in Danielle Outlaw. If her name doesn’t sound familiar, she was the police chief for Portland. It marks a first in the city’s history: a black female police chief. Outlaw is tapped for the job at a time when the city is experiencing an uptick in violent crime. According to the numbers crunched by the Philadelphia Inquirer, homicides and shootings spiked in 2019. The city was left with 351 murders this year. In all, violent crime reached its worse levels in nearly a decade.

According to reports, the hiring process for this position was taken into the bunker, with some 30 candidates being interviewed in secret. Outlaw comes with nearly 20 years’ worth of experience in law enforcement. And this wasn’t a career her father necessarily was keen on when she decided to take this career path (via Inquirer):

After an extensive search, I am proud to appoint Portland, Oregon’s Police Chief Danielle Outlaw to serve as the next Commissioner of @PhillyPolice. I am confident that Outlaw possesses the strength, integrity, and empathy vital to leading the department. https://t.co/1HELnOYaA5

Danielle Outlaw was 16 when television screens across America were filled with grainy footage of Los Angeles police officers beating a black motorist named Rodney King on a highway, their kicks and baton strikes illuminated by the faint glow of a patrol car’s headlights.

“No one was saying they wanted to be a police officer growing up,” Outlaw, who was born in East Oakland, once told Willamette Week, a newspaper in Portland, Ore.

Yet that’s exactly what she chose to do while in high school, while the nation was still recovering from the L.A. riots. An internship with the Oakland Police Department introduced Outlaw to a cop who showed her a different side of police officers. He was friendly and approachable. Human.

Outlaw’s father, who worked for the California Department of Transportation, wasn’t impressed by her career choice. “My dad told me flat out it was a waste of a degree,” she told the paper.

Nearly two decades later, Outlaw is the new face of the Philadelphia Police Department. She was officially handed the commissioner’s job on Monday when Mayor Jim Kenney introduced her during a City Hall news conference, bringing to an end a secretive, four-month interview process that attracted 30 other candidates.

Yet, besides the uptick in crime Outlaw will have to grapple with, there's her tenure in Portland. It's something to highlight. The city has been overrun by political violence, especially those calling themselves “Antifa.” In Philadelphia, the Antifa presence is also strong. Maybe it’ll be different in Philly? Time will tell. Yet, both cities have liberal mayors. That dims the chances of a crackdown on these violent thugs since hating police is the popular thing to do if you’re a liberal Democrat or a far-left radical, though for the latter--that's always been the case. Philly Mayor Jim Kenney was the one dancing with staff when the city of brotherly love won a case regarding their sanctuary city status. That doesn't bode well.

Matt Vespa
Rand Paul is Noting a Key Discrepancy in the Justice System
Katie Pavlich
'Unredacted with Kurt Schlichter': Where Is The Science?