After These Revelations, No Wonder Why Federalist Co-Founder Called Comey the ‘Most Corrupt...Individual’ to Ever Serve the FBI 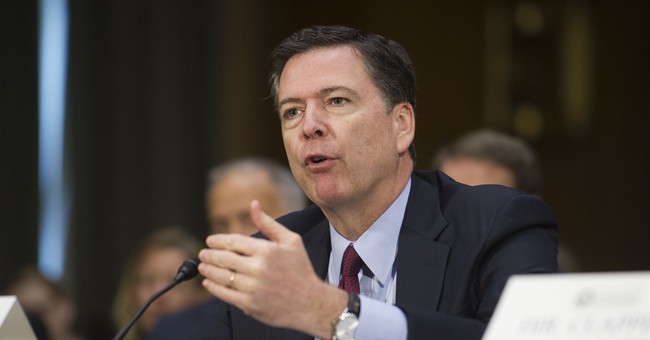 There was a time where I like James Comey. I thought he was a professional, impartial, and someone who was in a hopeless situation concerning the 2016 election. Any conclusion he made about the FBI’s review of the Hillary Clinton email server was going to be trashed. If he recommended charges, the Democrats would go nuts. If he didn’t, the Republicans would go nuts. And any decision would be seen as the bureau weighing in heavily on a political matter. It was a no-win situation. The FBI was going to be torched no matter what it did—and it did have cause to investigate whether Hillary Clinton mishandled classified information while serving as President Obama’s secretary of state. All official business was done on that homebrew server that was unauthorized and unsecured. And yes, it was breached by foreign entities.

Graham: “The former FBI director James @Comey said this week that your report vindicates him. Is that a fair assessment of your report?”

Horowitz: “The activities we found here don’t vindicate anybody who touched this.”
pic.twitter.com/EaQGCgjHbv

James Comey's leadership at the FBI is being exposed today as reckless and incompetent (at best), corrupt and malicious (at worst).

And Democrats still think Trump *obstructed* justice by firing him.

Comey was fired for cause over mishandling the email probe, specifically going around then-Attorney General Loretta Lynch and announcing an end to the investigation, along with the decision to not file charges against the former first lady. And now, we’ve all learned that he was just as shady as the rest of the resistance crowd at the Department of Justice. First, the DOJ inspector general’s report on FISA abuses during the 2016 election exposed the ex-FBI director as a total liar when it comes to knowing the origins of the Trump dossier. He knew it was a Clinton-funded opposition research project, despite saying he didn’t know what the deal was with the document with Fox News’ Bret Baier (via The Federalist) [bold text indicates IG report] :

In April 2018, former FBI Director James Comey appeared on Fox News with Bret Baier. Looking back at this clip after the release of the Inspector General’s FISA report, it is evident Comey lied to Baier about knowing Christopher Steele’s dossier was funding by the Democratic National Convention and the Hillary Clinton campaign.

The IG report shows that Comey was indeed informed of the funding of the dossier. According to the report, on October 12, 2016, then-National Security Division (NSD) Assistant Attorney General Stuart Evans raised concerns to both Comey and Andrew McCabe about the DNC and Clinton campaign funding the Steele dossier.

On October 12, 2016, Evans’s concerns about Steele were briefed to Comey and McCabe in a meeting attended by at least [E.W] Priestap, [Peter] Strzok, Lisa Page, and the OGC unit Chief. According to notes of the meeting, the group discussed that Evans was concerned Steele may have been hired by someone associated with Hillary Clinton or the Democratic National Committee (DNC) and that the read copy of the FISA application would not be filed with the court that day so that Evans could further assess the potential bias. …

Following the meeting, the OGC Unit Chief emailed [Deputy General Counsel Trisha] Anderson and and the OGC Attorney on October 12 and advised them that the concerns Evans had raised were discussed with Comey and McCabe.

Nonetheless, Comey lied to Americans in order to keep up the appearance that the Steele dossier was in some way legitimate or that he was unaware of its illegitimacy.

And remember how he denied there was a Trump wiretap …until we discovered that Trump Tower was indeed…wiretapped, as Paul Manafort’s apartment in the building was under surveillance (via WSJ):

Wait... @Comey told me there was no wiretap!!! https://t.co/GCsD3UmRXb

CNN reported …that the FBI obtained a warrant last year to eavesdrop on Paul Manafort, Mr. Trump’s campaign manager from May to August in 2016. The story claims the FBI first wiretapped Mr. Manafort in 2014 while investigating his work as a lobbyist for Ukraine’s ruling party. That warrant lapsed, but the FBI convinced the court that administers the Foreign Intelligence Surveillance Act (FISA) to issue a second order as part of its probe into Russian meddling in the election.

Guess who has lived in a condo in Trump Tower since 2006? Paul Manafort.

The story suggests the monitoring started in the summer or fall, and extended into early this year. While Mr. Manafort resigned from the campaign in August, he continued to speak with Candidate Trump. It is thus highly likely that the FBI was listening to the political and election-related conversations of a leading contender for the White House. That’s extraordinary—and worrisome.

Mr. Comey told Congress in late March that he “had no information that supports those [Trump] tweets.” Former Director of National Intelligence James Clapper was even more specific that “there was no such wiretap activity mounted against—the President-elect at the time, or as a candidate, or against his campaign.” He denied that any such FISA order existed. Were they lying?

James Comey is the most corrupt, duplicitous, dishonest individual to ever serve as director of the FBI. He is a liar, a leaker, and a disgrace.

It’s no wonder why Federalist co-founder Sean Davis ripped into Comey, calling him one of the most corrupt and duplicitous people to ever run the FBI. With all of the dirty laundry being aired, and this just scratches the surface, it’s not wrong to say that.