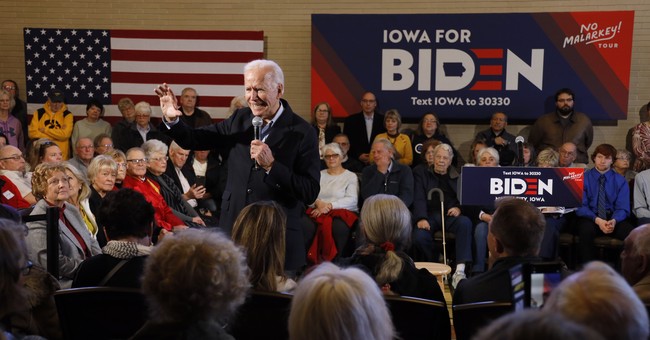 Former Vice President Joe Biden’s “no malarkey” tour took a turn into the ditch when he decided to attack an Iowa voter for bringing up his age and his son, Hunter Biden. Hunter has been an issue that the Biden campaign has yet to diffuse. He got a board position at Burisma, a Ukrainian energy company, making $50,000/month despite having zero experience in this field when daddy Biden was VP. The company is shady, and Joe was running efforts to root out corruption in Ukraine at the time. It’s been alleged that Hunter was there to sell access to then-top-level Obama officials. It’s part of the impeachment drama that’s engulfed D.C.

President Trump allegedly threatened to withhold military aid to Ukraine unless they opened an investigation into this arrangement. This supposed quid pro quo is the basis for the House Democrats’ impeachment push, which is solely based on hearsay. Yet, the Biden connection is a story—and it’s made more so by the former VP’s aggressive and nasty reaction to when people bring it up. Biden mocked the man for his weight and intelligence, but this Iowa voter got the last word, saying that at least the former vice president didn’t come off as “senile” (via CBS News):

The Iowa voter who Joe Biden called a "damn liar" speaks with reporters after their tense exchange: "At least he's not getting so old that he's senile." https://t.co/jUThLG82gh pic.twitter.com/UGSNrBt9ei

Joe Biden called a man a "damn liar" during a heated exchange at a campaign event in New Hampton, Iowa, on Thursday. The remark came after the man brought up the conspiracy theory that Biden secured a position on the board of Burisma, a Ukrainian gas company, for his son, so that his son could sell access to the president.

The man, who only identified himself as a retired farmer, first criticized Biden over his age, then moved onto Hunter Biden's work in Ukraine.

Biden then interrupted: "You're a damn liar man, that's not true. And no one has ever said that, no one has proved that."

Now, only feet away from the man, Biden said, "I know you do, and by the way, I'm not sedentary."

"Look, the reason I'm running is because I've been around a long time and I know more than most people know, and I can get things done, and that's why I'm running," Biden said, appearing to be referencing the original comment about his age. "And if you want to check my shape, let's do pushups, let's do whatever you want to do, let's take an IQ test."

The farmer replied, “At least he's not getting so old that he's senile.” I’m not so sure about that, sir. Biden pretty much said that he was an honorary black person in the last Democratic debate because…black people supported him. He has forgotten which state he was in campaigning, thought the Obama administration was around in 1976, I mean the list goes on and on. He comes off sluggish and slow during the debates as well. It should not be hard to take a swing at Tom Steyer if you’re the former vice president and a supposed party heavyweight. It was painful to watch. So, is Joe not “senile.” I don’t know about that, but right now, his staff is rushing to spin that he didn’t fat shame an Iowa farmer.