Mattress Girl Succumbed to a Well-Known Side Effect of Left-Wing Feminism, But the Story Has an Interesting Ending 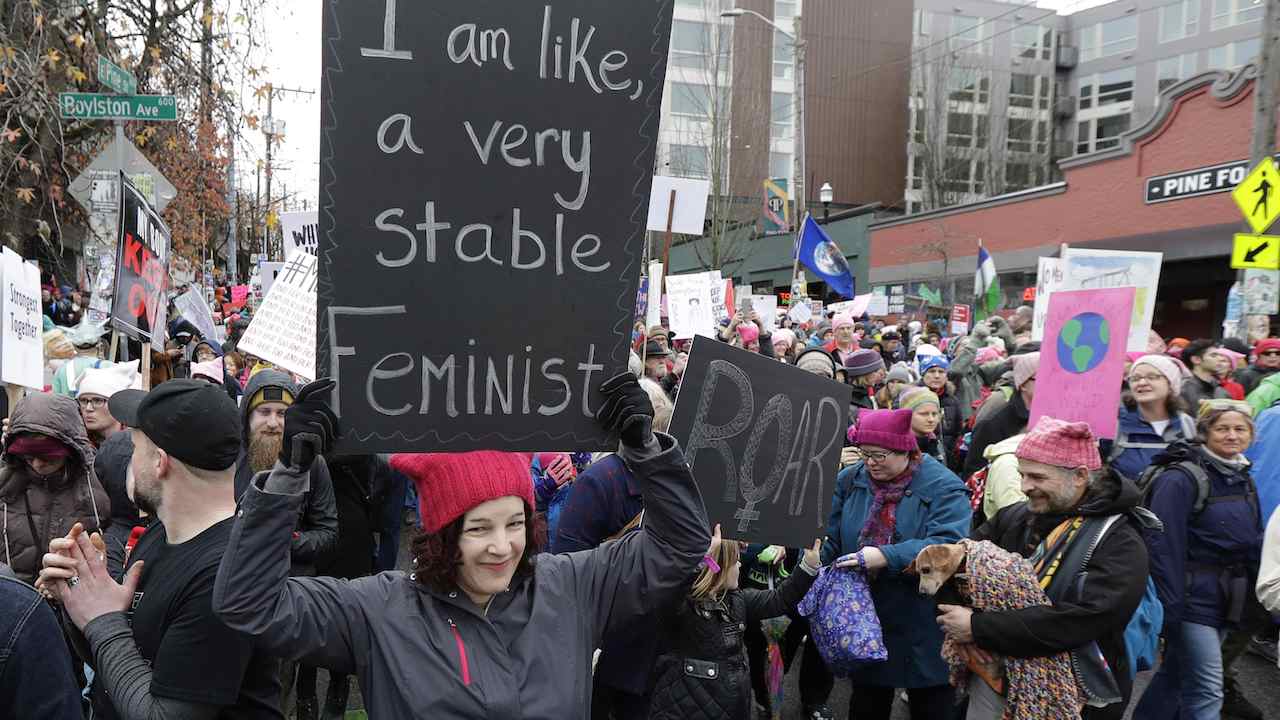 College campuses have become left-wing cesspools. We’ve all known about the liberal bias in academia. It’s nauseating, but for a while, the conditions were tolerable. And by that, I mean a conservative could go about his or her day, get a degree, and go about student life without fear of being subjected to intimidation by the progressive mob. Those days are over.

I consider myself lucky. Yes, I heard that there were a few lefties in Dickinson College’s economics department who were a bit open with their views, but the political science department—loaded with liberals—kept their positions in neutral gear. They stuck to the curriculum and kept their biases in check. It wasn’t terrible. I didn’t experience the horror shows we see today, though I have heard that the school has adopted a pronoun code for some folks, and my senior year, we had a day with gender-neutral bathrooms.

The point is when we see the cohorts of the progressive Left react the way they do to differing viewpoints, even when it comes to those who hold more moderate views within the spectrum of the political left, we see an unhinged mess. How will these kids survive the chaotic, non-politically correct, and complicated world post-graduation? The world is not like the campus of Berkeley. There are more of us—normal people—in the world than there are of you. We need to work; no one has time to block traffic intersections for Black Lives Matter or so-called climate change. Millions of Americans have responsibilities that go beyond being lectured to by the semi-intellectually challenged who think they’re elite because they got their ‘whine like a little bitch’ degree from Lenin University.

And then, there are some who graduate and become exposed to other views and realize that they won’t evaporate into the ether. It doesn’t make you a bad person to talk with someone with opposing views. Maybe you can take a break from constantly worrying about being on the right side of this imaginary arch of history. You don’t have to be a member of the hordes of Mordor.

In liberal America, no one can be Switzerland. As former RedState editor Erick Erickson once said at a conference I attended in years past, “they will make you care.” Well, one prominent feminist and face of the movement to combat sexual assault on college campuses who succumbed to the side effect of left-wing feminism got curious about conservatism and shocker, found that she can disagree with someone and be totally fine with it.

Her name is Emma Sulkowicz, but you probably remember her best as Columbia’s “Mattress Girl.” She alleged that fellow student Paul Nungesser raped her during her time at the prestigious university. She was upset with the way the administration responded and dragged a mattress everywhere she went. She became a performance artist, opened a studio after graduation, taught art classes, and just straight-up hated men. She viewed conservative views with disgust and pretty much encapsulated the quintessential social justice warrior. Then, one day, scrolling through Tinder, she decided to go on a date with an uber-conservative guy. Because he wouldn’t reveal his name, he was given the alias "Chad."

They both exchanged literature that aligned with their respective opinions on politics. The New Yorker's lengthy piece details that Sulkowicz annotated the articles he sent her, went on the date, and it sort of became a learning course for her. The piece notes that Sulkowicz and Chad did date for a bit, but ended up being “amazing friends” instead. Sulkowicz was hooked on learning about the Right. She frequented libertarian and conservative cocktail and house parties, namely Reason Magazine, which torched her story of sexual assault. She read Jordan Peterson, a noted and brilliant Canadian psychologist who has challenged much of the Left’s orthodoxy to its extreme ire. She even started reading a core conservative publication—National Review. She’s fearless.

The writer of The New Yorker piece, Sylvie McNamara, accompanied Sulkowicz to Reason’s Robby Soave’s book party for "Panic Attack: Young Radicals in the Age of Trump," a work that, by his admission, is very critical of her. She went anyway—and over the fullness of time, the two are said to have hit it off. Sulkowicz is there to have fun, something the publication noted was lacking in her former line of work: art. She has now left it, finding it “humorless,” too competitive, and “narrow-minded” (via The New Yorker):

Having found the art world humorless, narrow-minded, and grotesquely competitive, Sulkowicz says she stopped making art about a year ago. She quit a fellowship at a museum, ceased teaching art classes, and was essentially unemployed for a time, drawing income from occasional speaking gigs, mostly about campus sexual assault. (Her remarks on Me Too have been fewer; she supports it, but wants a clearer path to forgiveness.) She has been working on a memoir that draws on her diaries from Mattress Performance, and last month, she started a full-time, four-year master’s program in traditional Chinese medicine. There, she’ll learn skills from acupuncture to herbalism, which have been her “personal healing modality” for years. Sulkowicz has parried assumptions that this is performance art, too. It grates on her. “I’m a human and humans can change,” she says, insistently. “I’m telling you that I don’t want to make art anymore.”

But in some ways, it’s easier to assume that Sulkowicz’s political posture is performance art: this provides a clear motive, one that’s politically straightforward. If Sulkowicz is not making art, then it’s much harder to grasp why she’s doing this and what it means. Part of the confusion, Sulkowicz assumes, springs from a pervasive misunderstanding about who she is, rooted in the dissonance between her public image and private consciousness. While many assume she’s at Soave’s book party for some admixture of art and progressive politics, Sulkowicz says she’s mostly there for fun.

Despite her activist image, Sulkowicz claims she has never been particularly political. She didn’t come to Mattress Performance as an activist, or with the expectation that her work would receive attention.

It sounds unlikely. Sulkowicz, after all, was a student on a progressive campus, an alumna of a progressive Manhattan high school, and her work seemed clearly in dialogue with feminist performance of generations past. Besides, she was already something of a public figure when she started the piece: in early 2014, after word got out that a few Columbia students had accused a fellow student of sexual assault, Senator Kirsten Gillibrand asked if any of the unnamed accusers would go public in support of her campus sexual-assault bill. Sulkowicz agreed, which landed her on the front page of the New York Times. And while this might suggest more political savvy than Sulkowicz will own, in rereading the initial coverage, she actually doesn’t speak in political terms; others do for her.

In her speeches back then, Sulkowicz’s rhetoric sounded quite leftist. But years later, during her conversations with Chad, he suggested that her views might align more with libertarianism. Sulkowicz was open to that — her progressive politics didn’t feel core to her identity, even as they defined her image. Then Chad brought her to a party where she approached Nick Gillespie, an editor at large of Reason, a libertarian magazine that Sulkowicz knew from her Mattress Performance days.

To show her maturation, Sulkowicz did approach the magazine’s editor-at-large Nick Gillespie, but not about her sexual assault case, which the magazine reported on extensively, as noted by The New Yorker, though it was mostly focused on the ad hoc tribunals that govern these cases and how constitutional protections are lacking for the accused. We’re all innocent until proven guilty, which is a principle not enforced on today’s college campuses. Slate has published lengthy pieces about how the shift to combat this issue has swung too far in the other extreme, but I digress. Sulkowicz was more interested in why Gillespie was a libertarian.

She still considers herself a feminist but isn’t beholden or interested in landing in any political tribe at present. She appears to be happy being an independent thinker, more geared toward exploring new ideas and hearing out new opinions. She also doesn’t disown her past. As the magazine noted, she described her past artwork as works that provided a means to get whatever it was out of her system. She now views her nearly-thirty-year-old self as much more developed intellectually and mature than her 21-year-old self being used as one of the many faces of the progressive Left for its agenda.

What can you say? Life can be surprising. A girl who seemed primed to lead a legion of Antifa thugs turns out to be open-minded, curious and might be flirting with fitting into the more libertarian realm of things on the issues. The magazine wonders if Sulkowicz was “redpilled.” Who cares? She’s reinvented herself because that’s the beauty of this country. You can change opinions, votes, and not fear that doing so will result in a black bag being wrapped around your head by some secret police force.

Liberalism is a political philosophy that requires obedience to a certain set of rules. If those rules come into conflict, they make up new ones — no wonder why this philosophy is so popular with young folks. You have to be put into boxes. Trying to break free of those boxes could make you the victim of the latest trend: cancel culture. Sulkowicz was "Mattress Girl." She’s now looking for something new. Something more intellectually rounded and interesting. She’s done playing a part and living in a box. This is a story of hope. America is what you make of it, and she often fights back hard on what you want.

I know I often say that the time for conversation is over. The Left cannot be reasoned with, and that conservatives and the GOP shouldn’t negotiate with them. As long as Trump is president, we need to be on a war footing because the Left has the goal of booting him from office by any means necessary. You cannot talk to these people. They’re not like Sulkowicz, who went out on her own accord to search for differing views and discovered that she wouldn’t catch political SARS in the process. If the Left comes to us looking for a conversation about anything, then by all means—let’s talk. But it’s they who have to cross no man’s land.