Oh, So That’s Why the Star Witness For Christine Blasey Ford Changed Her Remarks 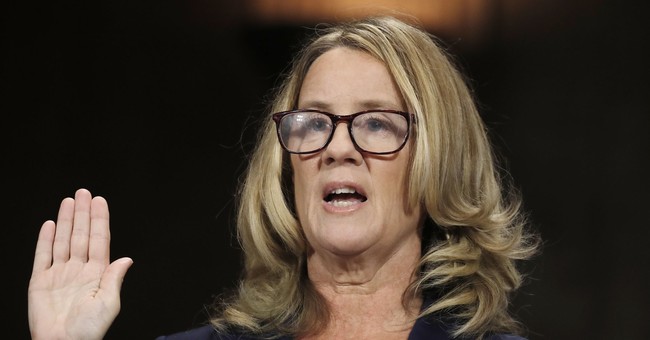 Things fall apart…again. For Justice Brett Kavanaugh, the liberal media once again decided to launch a full-blown blitz to get him removed from office. The Left thought this drive was going to be a game-winning drive, like the Desert Storm push by Norman Schwarzkopf. Finally, we can nail this guy who took Merrick Garland’s seat. We have revenge, except they didn’t. They got a face-full of buckshot. Once again the liberal media proved themselves to be Trump deranged, shoddy, irresponsible, and an enemy to the American people. Trump won. Conservatives won. And you lost—and you’re still losers. Kavanaugh is in. He’s confirmed—and there’s really nothing you clowns can do about it. Yell all you want. Whine all you want. We won. You lost. And Trump gets to kick your teeth in again.

The publication that decided to self-immolate was The New York Times that tried this QB sneak. It got stuffed. And it fell apart quickly. Why? Well because the new allegations they all peddled for about 36 hours came to an ignominious end when the supposed new accuser didn’t even know what the paper was talking about. In all, she doesn’t remember any sexual impropriety inflicted upon to her by a young Brett Kavanaugh (via Fox News):

The New York Times suddenly made a major revision to a supposed bombshell piece late Sunday concerning a resurfaced allegation of sexual assault by Supreme Court Justice Brett Kavanaugh — hours after virtually all 2020 Democratic presidential candidates had cited the original article as a reason to impeach Kavanaugh.

The update included the significant detail that several friends of the alleged victim, Harmon Joyce, said she did not recall the purported sexual assault in question at all. The Times also stated for the first time that the alleged victim refused to be interviewed, and has made no other comment about the episode.

The only firsthand account concerning the supposed attack in the original piece, which was published on Saturday, came from a Clinton-connected lawyer who claimed to have witnessed it. (The lawyer, Max Stier, did not actually provide his account directly; the Times acknowledged that "two officials who have communicated with Mr. Stier" had relayed his supposed version of events.)

The Times' revision says: "Editors' Note: An earlier version of this article, which was adapted from a forthcoming book, did not include one element of the book's account regarding an assertion by a Yale classmate that friends of Brett Kavanaugh pushed his penis into the hand of a female student at a drunken dorm party. The book reports that the female student declined to be interviewed and friends say that she does not recall the incident. That information has been added to the article."

Get wrecked, losers. Just get totally wrecked. In general, what we’ve seen over the past few years is that there are a great many writers on the Left who are supposedly covering this White House who should just be beaten into a coma. That being said, it gets worse. Leland Keyser, the star witness to Christine Blasey Ford’s account of supposedly being sexually assaulted by a young Kavanaugh, reportedly said she was bullied by liberals to revise her initial remarks since—shocker—it really didn’t back up Ford’s account. She said that Ford’s allegation simply didn’t make any sense (via Washington Examiner):

Leland Keyser, a high school friend of Christine Blasey Ford, cast doubt on Ford's claims of being sexually assaulted by Supreme Court Justice Brett Kavanaugh at a high school party in the 1980s.

“I don’t have any confidence in the story,” Keyser told New York Times reporters Robin Pogrebin and Kate Kelly in their new book, The Education of Brett Kavanaugh: An Investigation, a copy of which was obtained by the Washington Examiner.

Last summer, Keyser seemed to say that, although she didn’t remember the event, she still believed Ford.

“Ms. Keyser does not refute Dr. Ford's account, and she has already told the press that she believes Dr. Ford's account,” Keyser’s attorney wrote last year. “However, the simple and unchangeable truth is that she is unable to corroborate it because she has no recollection of the incident in question.”

But Keyser now says she lacks confidence in Ford’s account. “We spoke multiple times to Keyser, who also said that she didn’t recall that get-together or others like it,” Pogrebin and Kelly wrote. “In fact, she challenged Ford’s accuracy.”

"Those facts together I don't recollect, and it just didn't make any sense," Keyser told the authors.

And then, the bullying came…allegedly:

A friend of Christine Blasey Ford who initially said she knew nothing about the sexual assault allegations against Supreme Court nominee Brett Kavanaugh said she felt pressure to change her statement to say she believed Ford but couldn’t corroborate the allegations.

Ford has said Keyser was present at the high school get together where the alleged assault took place.

To summarize, Ford doesn’t know how she got to this supposed party where the alleged attack occurred, or how she got home, who organized it, or why there even was a party—but she knows for sure that Kavanaugh attacked her. But believe all women—because due process and fact-finding are hobbies for rape apologists apparently in the minss of the Left, or people who—you know—take this seriously and don’t want it to be used as a political ICBM to nuke opponents. Sadly, we’re past that point. Luckily, this missile missed its target.

This whole story is trash. The whole assassination campaign against this eminently qualified jurist was one of the nastiest fights in recent memory, but we won. At long last, not only did we get our guy on the court, whose credentials are excellent, we finally got revenge on Democrats for their thrashing of Robert Bork.  Yes, victory and revenge can be very, very sweet. And the whole game was exposed when Ford’s lawyers said that her former client was concerned about abortion rights, which motivated her to come forward with her ‘story.’ Ford’s father is a Kavanaugh supporter, which is just the coup de grâce to this whole fiasco.

And the liberal media wonders why a lot of people hate them. They’re liberal. They’re dishonest. And they’re morons. Who wouldn’t want to throw rocks at these people?